I've shrunk or the shirt has... 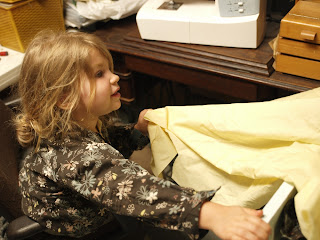 my mini me demonstrating how to make a dress... 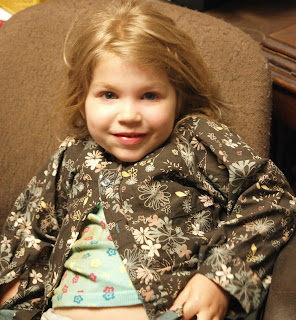 I've shrunk, or the shirt has.  Actually, the shirt has.  I made it smaller so it would fit Esme - after both of the sleeves ripped nearly clean off at work the other day.  The tears were so symmetrical - and Mark indicated where they tore it would probably fit Esme.  He was correct!  Esme indicated to me it was my job tonight to sew something for her - so here it is.  I used a basic dress pattern, split the front instead of the back and used the original button band shortened up on the front of the shirt.  It has no collar.. but it looks a lot like the shirt did on me.

Further garden notes - both the blue and red field corn are coming up, some of the white summer squash, and the wax beans and some more of the pole beans.  We planted watermelon and cataloupe in Grandma's garden today.  It is due to get down to 39 degrees Friday night, and 36 Monday night.  I hope our plants are not damaged by that.  Miss Pogo cat went out and did not return yesterday or all of last night.  We fear the worst, as she does not stay out long at all.  Her kittens are not old enough to eat by themselves.  Misha dog is trying to help with other facilities for them - but they seem to not even recognize milk or meat as food.  We are seeing what we can do for them but it may not be enough to prevent an unhappy ending.  This has happened to us once before many years ago - but the kittens were old enough to take quickly to other types of food when offered - and that is not the case now.

Note: The other day Esme picked up a bath soap container I have and said 'EWWWW Mama, soap for brains.  Eww... Mama, why you do that anyway?'  I had no clue what she meant until I looked at the container.  It had a picture of a large raspberry on it.  I had to laugh.  'That is a raspberry, not a brain.'  She insisted it was a brain, and I was going to use a soap made of brains, and it had to smell BAD.  I told her it smelled like a strawberry, and the picture was like a strawberry, but very big so we could see all the pockets of juice.  She looked hard at it.  I took some out and held it out for her to smell.  She looked like I was offering her a terrible rat on my hand and asking her to smell.  Then she sniffed very tentatively and said 'Oh, yea!' and laughed about it.  'It does smell like strawberry!  It is Good.  I can have some on my belly?'  I gave her some to wash up with and she was happier about it.  I told her how silly I thought it was she thought that was a brain - but that yes, it did sort of look like the pictures of brains in her body book!
Posted by RheLynn at 8:48 PM