Radar is dead. Our boss found him by a fence this morning, no sign why. Newt (our girls' mother) has also been missing, and probably isn't coming back.

I was already thoroughly pi**ed off about my older sister from a phone conversation from last night... I just want to shake some sense into her. If you know me well, I don't get teed off very often. I was in a very bad mood about that when we got to work today (I had a nightmare as well about the situation which set me on edge) - and then I heard about Radar.

I was a wreck for about an hour after we arrived. 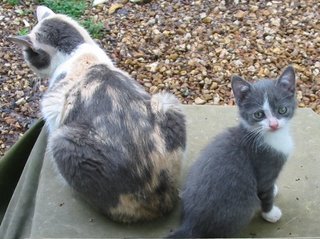 Newt and Radar
RadarHe was such a bright, sweet little soul. From the very beginning, (when we still thought he was a girl) he was the diplomat of all of the kittens, telling the others which humans and dogs were good with kittens and to come out of their hiding places. He got along with every other animal on the farm here - even our girls were beginning to accept him as a welcome playmate. He crawled into my lap in the office at every chance and purred himself to sleep with his feet in the air. He never let me go by the porch (where their food dishes were) without a conversation about 'come play with me - I'm cute!' When he ran, it seemed like he pounced continuously instead of really running.

He seemed completely normal on Saturday night (when we got back from Memphis), but then this morning - he's gone.
Posted by RheLynn at 1:44 PM

Oh, how awful and how sad, RheLynn! I'm so sorry.

Oh, I'm so sorry to hear about those kitties. :( And pooey on your sister.

I'm so sorry sweetie. We send hugs and kisses.

I'm so sorry. Losing a pet is so difficult especially when they are part of the family. You are in my prayers.

Thank you everyone - I guess when we saved him earlier this year it was just to be with us a little longer... I keep thinking about that.

Our boss still doesn't know what could have caused it, or where Newt (mommy cat) could be for so long.

Again, thank you for your thoughts, hugs and prayers. We are all going to miss him terribly.

So very sorry about little Radar, when this happens to me-I keep telling myself that at least the little one had a good life while they were here. It doesn't make me cry any less, but it gives me some comfort. I have two brothers (and I have said pooey on them a bunch).

That nearly made me cry! I'm such a cat fanatic and to lose one is so horrible.

That is so very very sad about Radar. He's SOOOOO cute! With Isis and Morgan at 13 and 14 wks, I can only imagine how horrible it would be to lose one of them.

When we lost Copernicus last year (he was 3 yrs old) we were both so devastated, just cried and cried.

Extra big hugs to you, hunny!

Sorry I'm responding so late - I am just getting through my Bloglines now.

Any word on other local animals? It's so strange.