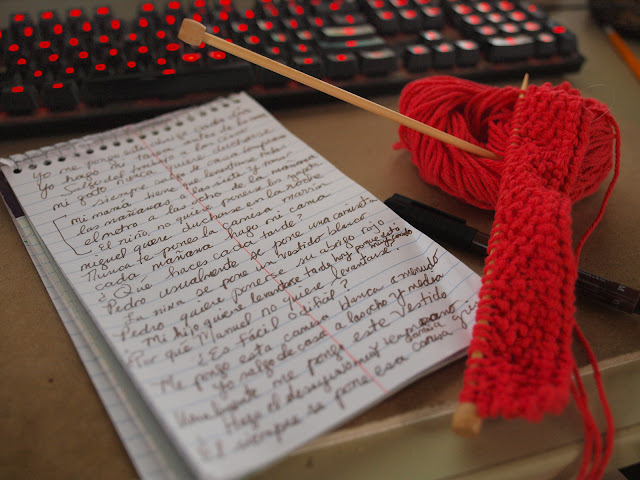 I haven't  updated in a while, just trying to get from point A to point B.  And now look, it's June.  I've been working in the post office for two and a half years, and Esme is a teenager, growing up and studying Forestry, Wildlife and next year, she wants to learn Construction techniques in high school.  High school!  Mark and her built a wall in the house yesterday, and are working on more things for our chicken yard.  We raised nearly twenty more birds this year, for egg production down the road.

I have taken to learning my languages 'en force' - Welsh and French are at the higher levels, and I have been grinding my brain against Spanish for the sake that Esme will learn that in high school, but not for a year or more.  Spanish is seriously hard for me.  Consider this, I've picked up Romanian, Czech, Portuguese  and Turkish on Duolingo at twice the rate or more of the Spanish I'm grinding my head on.  They all seem to 'slide in beside' the French, but Spanish is 'on the other side of my brain' only translating through the French like some sort of bad prism.  That is how it feels.  I know most people think Spanish is the easiest, but for me, it has never been.  Italian is a 'out there' goal, but it is also in the category of Spanish.  I've done a little more German (my high school language, but I'm not fond of it like the French cognates, my grandmother spoke some French so that is wired into me), and Norwegian Bokmal and Swedish, and stabbed at Japanese a few more times.  Do I have goals as a polyglot?  I don't know - but my brain is happy learning languages, except the Spanish.  It is learning that, though, I'm picking up meaning in songs and movies in Spanish that I did not before, so it is there.

I planted more in the garden for food this year, greens, potatoes, some tomatoes, zucchini, cucumbers and peppers.  It is going to have a terrible drought next week- temperatures over a hundred.. I hope the garden survives.

I am doing a little more weaving, and always something is on the knitting needles, whether it is a washcloth or a scarf or blanket thing, there is something. 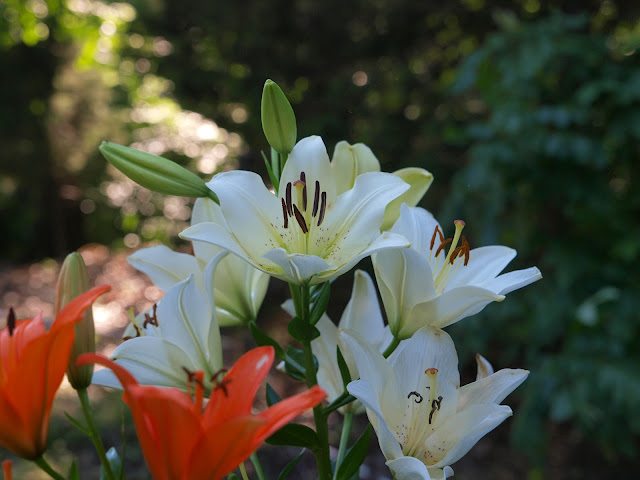 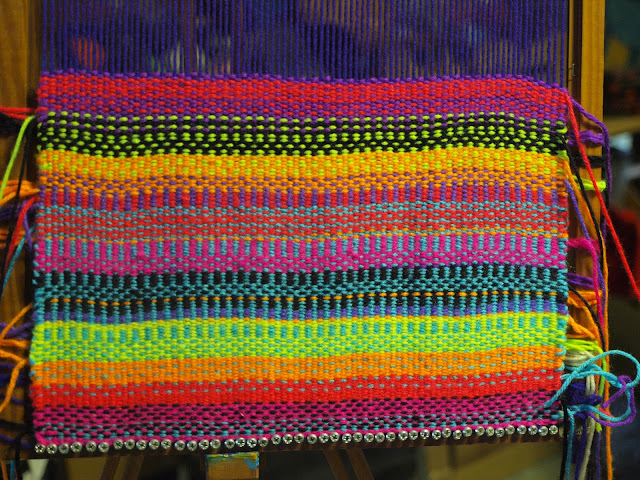 weaving on a frame, another upholstery type fabric, although it might be a library bag or new purse.  I am just following 'the next word' mathematically in the colors and going half-random when I get a few minutes.  The one bad thing it is on my painting easel, so I am not really painting when I am weaving. 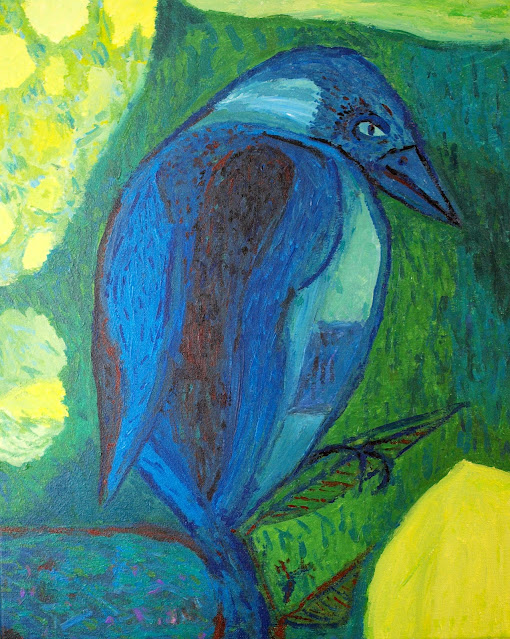 Some of my recent 'throw it on the canvas' paintings - The Bird in the Lemon Tree, above, 16x20 and 'The Etruscan Lion' 24x36, both acrylic.  I was happy to have the lion accepted into the Artist Showcase at the W.G.Rhea Library in April.  It did not sell, but at least people got to see him.  I think he is so happy and bright.  The bird painting is 'when I really should be completing something else' (The Eu Siempre Separe) painting that is also 36x24.. but I was happy with the way the colors came together, if not for the actual subject. 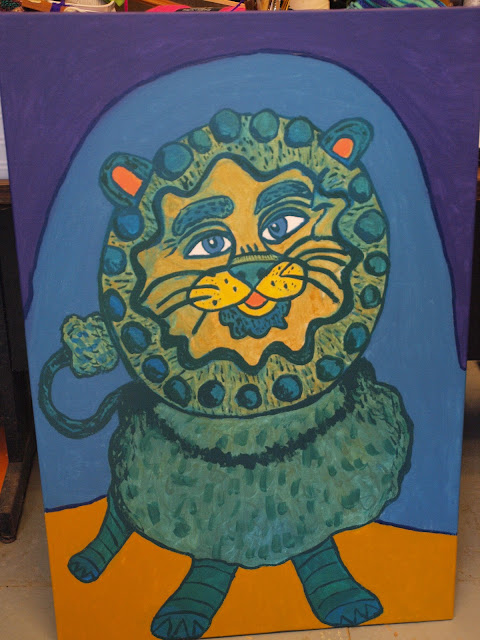 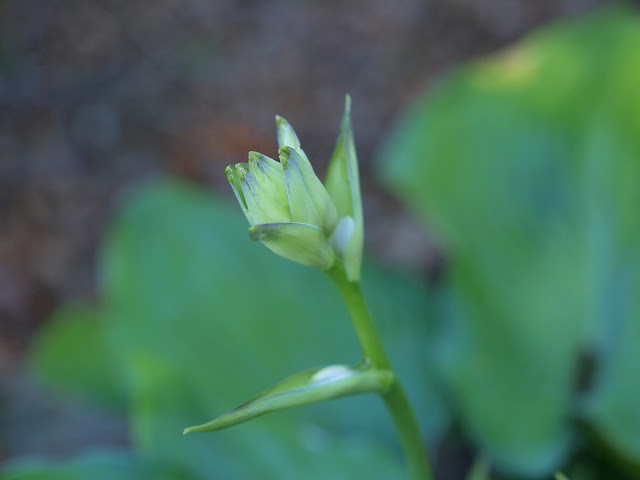 Hosta plants starting to bloom - I like to capture the botanical structures of things, I find that as interesting (more so sometimes) than the bloom.  I love to watch things unfold. 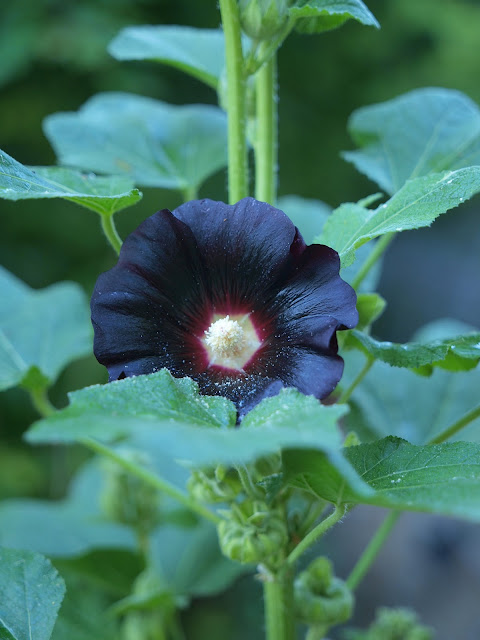 black hollyhocks in the garden

still quite proud of these, too - because they were so hard to get started and now come up as perennials every year 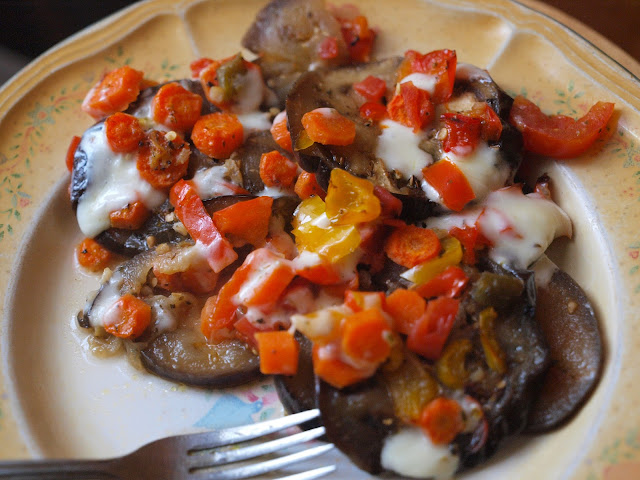 I'm working at cooking to fit the special needs of my Ehlers-Danlos-Syndrome (collagen disorder), anti-inflammatory, higher proteins, lysines.  This meal was one of the first times I've cooked eggplant properly.  However, usually I just take everything out of our garden, eggs from our chickens, grains and spices from my cupboard and make what my nose leads me to, and it is usually just right. 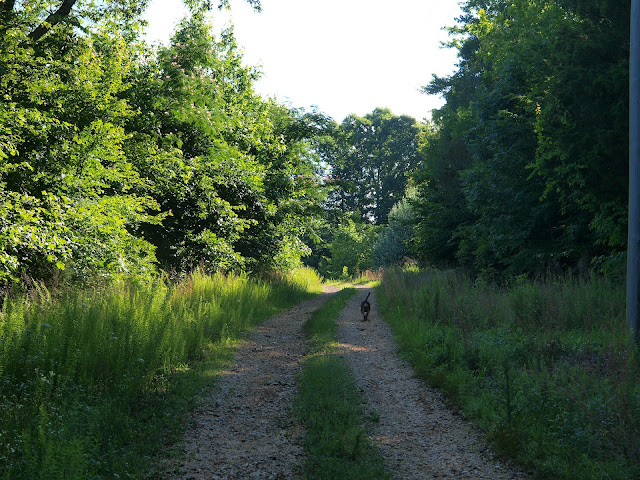 Our Charlotte, on the road to the mailbox 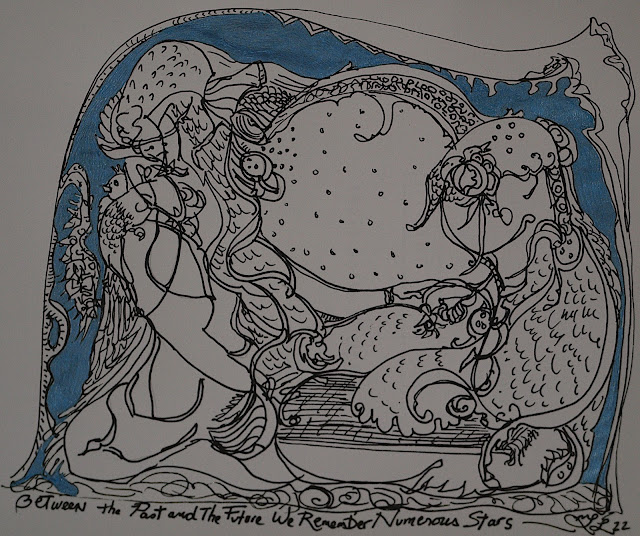 'Between the Past and the Future we Remember Numerous Stars' - this was the very last of my blue ink from the pack of pens I bought what.. eight years ago now?  This is the 'listening' style - where I draw lines across the paper in pencil or sometimes (like below) in the actual pen, and then slowly fill it in from one side of the paper to the other with the figures and symbols I see - telling a story and receiving some sort of philosophical message. 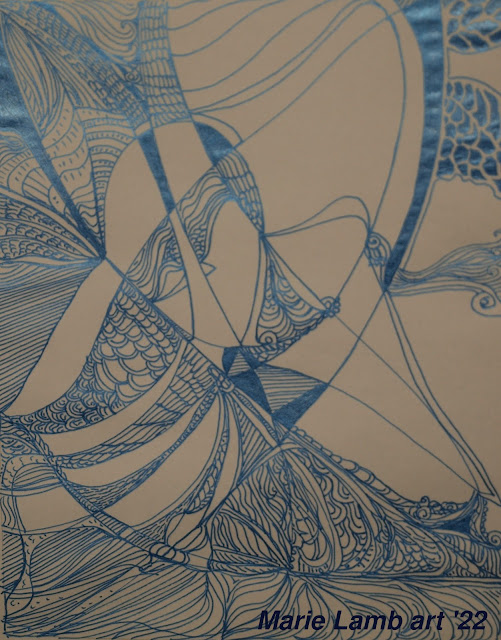 I still have my artwork up at the DayLight gallery, in Camden, TN on the city square.  And some of it has sold there.  I received some beautiful messages from people about what the art has meant to them and why it spoke to them.  I just got a new pack of pens in the mail and did this drawing above 'Come Sing the Universal Song With Me' last night. 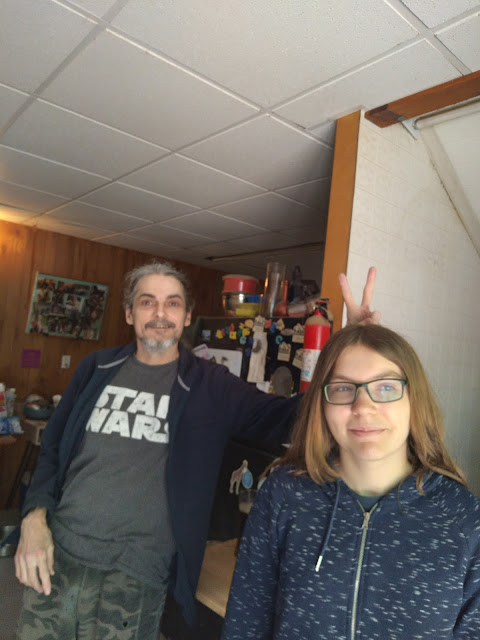 Before the short haircut this summer.  These two are my loves and so sweet, listening to them do construction work together and even though she may look like me you can hear how alike they are! 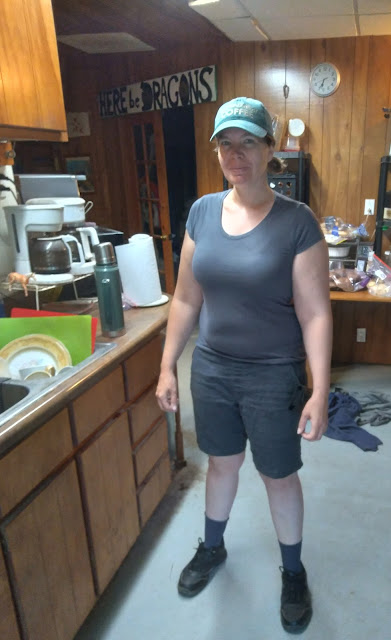 me as a mailman, for when I'm ninety and all broken-down and can't believe I actually did this once.  Delivering the mail, whether on walking route or driving rural route is hard on the body - long hours, sunburn, hydration issues, lifting stuff sometimes we shouldn't etc.. but we get the mail out there and get it done and go home.  I do appreciate not having to work until 10 pm and be back at 6 the next morning, then work till 3 and be back at 2 till 10 the next day and back over again.  That was what the Lowe's store did to me and it was seriously harder to keep shoveling my schedule the other direction than it is to just have a hard day's work and crash when I get home knowing if I'm on the next day, it will be at the same time as the day before. 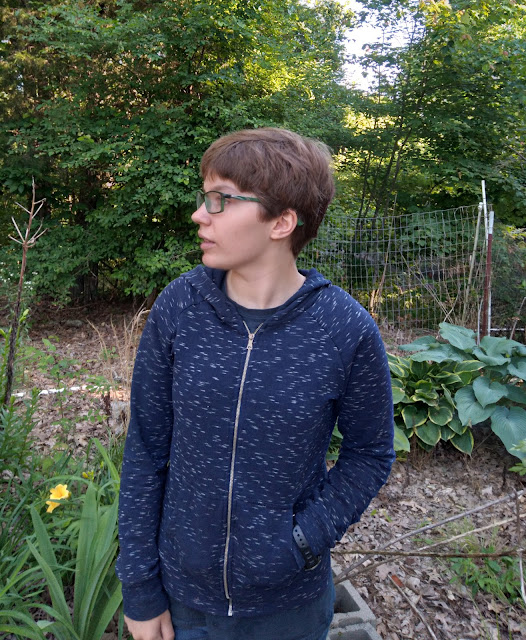 I am so proud of her, she is becoming her own person and trying to go after goals even after all of this pandemic.  She does say that she feels a lot of her generation has been 'robbed' of their goals and their opportunities the past few years, and that she is not sure if the social opportunities of her generation will ever straighten out after they have been quarantined, separated and put online and told to keep away from each other for years.  She says nobody her age really has friends anymore, in real life, that is...   Next week, though, she goes to a University campus for a Forestry college course 'camp-away' and we are excitedly getting her ready for that adventure.  I hope she has a great time there and comes back with good memories.  I did similar things with FFA and Academic Decathlon when I was her age, and they are still very good memories mostly, and a lot of 'stretch' for my social skills and worldview at the time.

Posted by RheLynn at 8:06 AM No comments: