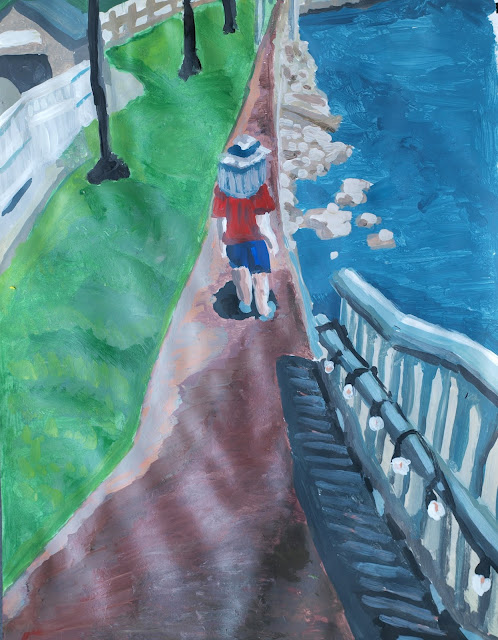 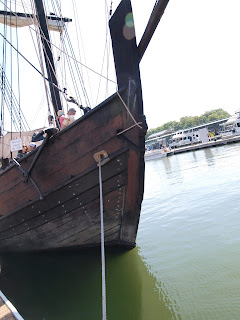 The Columbus replica ships had been stalled three times in the flooding in the Midwest - but now they are here.  We went out to see them, and then took Esme swimming afterwards.  It was a fun day - and hot! 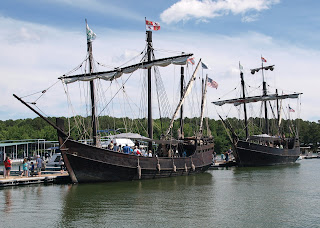 The Nina in front, and the Pinta in back.  We got to go up on the aft section on the Pinta because it is a bit bigger ship. 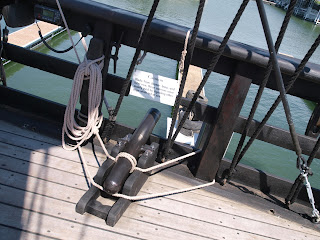 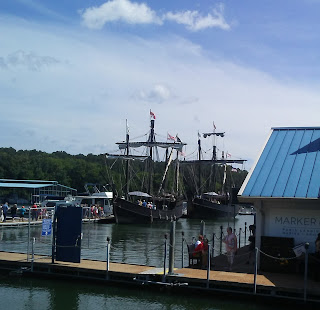 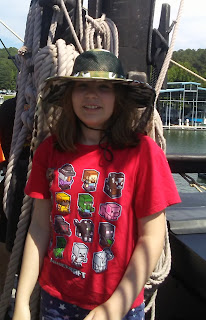 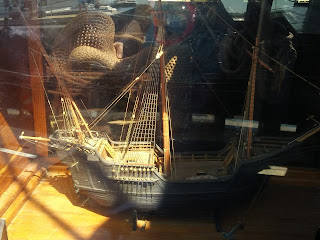 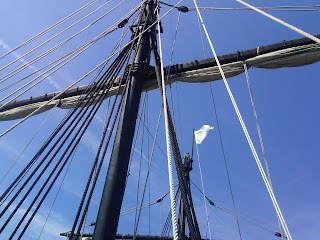 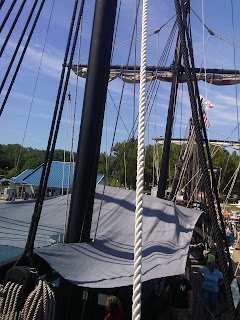 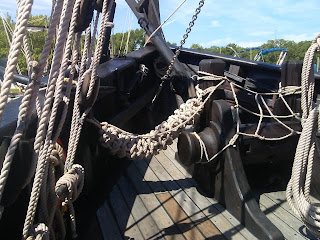 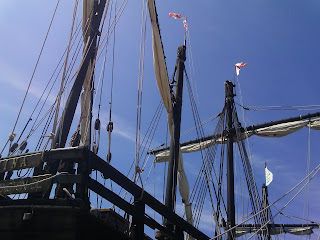 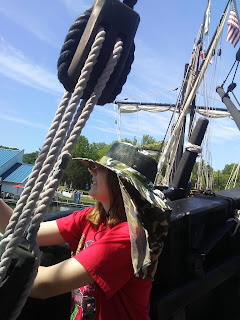 Get a pic of this Mom!  (adventuress) 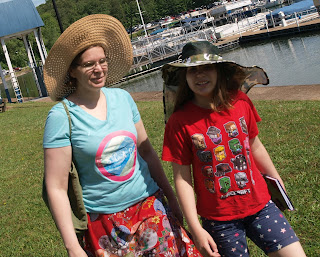 We both wore our floppy hats!  Hers was less floppy than mine - more Indiana Jones :)
Posted by RheLynn at 12:15 PM No comments: 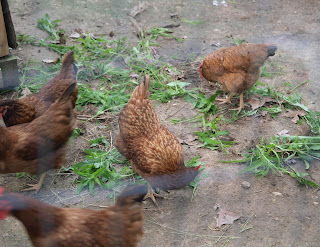 I spent a good amount of time in the garden, doing my primitive hack and plant and water by bucket... it felt like what was needed - that kind of work, seeds that (mostly) grew here... and got out the two little transplant seedling tomatoes and the cantaloupe.  I put out some tromboncino seedlings the other day and forgot to sunshade them (because it has been so cool and overcast and rainy) and the sun surprised me and killed them right off... I remembered to sunshade these transplants.

Put out landrace beans by the handful, black and brown and white and a lima bean and some whipporwill peas all tossed in there.  These are things we eat (well, the lima bean and some hopi pink corn kernels and two random cucumber looking seeds were thrown out as well because, well, they were in the container marked 'random'...)  I put out a cheap packet of our favorite sweet corn...

Later today I still need to scratch out some more basil in the patch near the bought tomatoes... maybe a few more cucumber seeds (none have come up yet) and radishes (some.. but scraggly and only at the edges of the area).

The garden looks like a construction/battle zone.  I've seen deer tracks out there in the soft earth and was hoping by putting up tomato cages around things it would deter them from at least going directly there.

Planted the morning glory, moonflower amd scarlet runner bean also, today.  Last year's moonflower vines provided several pods of satisfyingly fat white seeds, that went in the ground with the five that were in the new packet.  The Hollyhocks are continuing to grow - the two plants that came up from last year.  I'm cautiously optimistic.  Something could still decide to step on them or eat them. 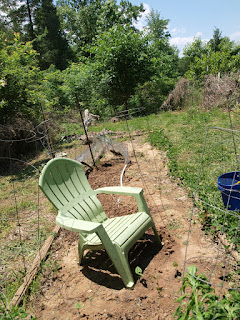 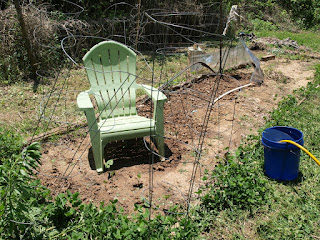 This is what I mean as primitive.. just what I can hack with the hoe and water with the hose.
The chair won't be there permanently.. it is keeping shade on the cantaloupe.. ditto with the contraption in the back corner for the tomato seedlings. 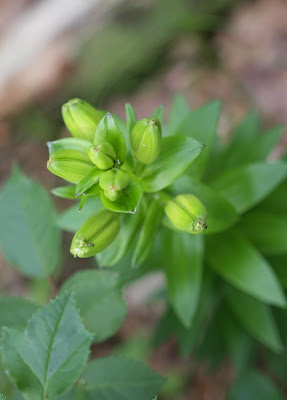 several lilies are getting ready to be showy 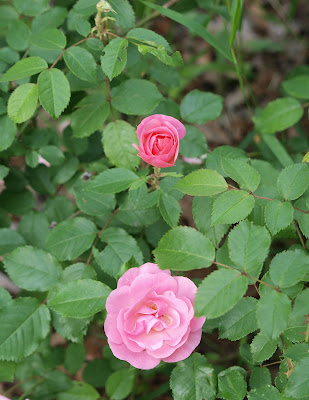 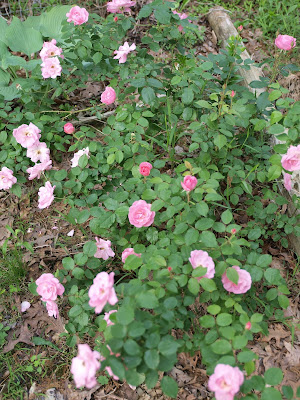 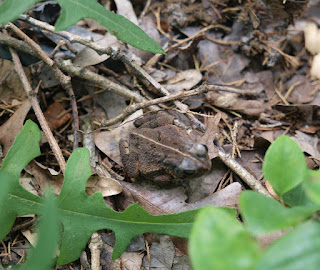 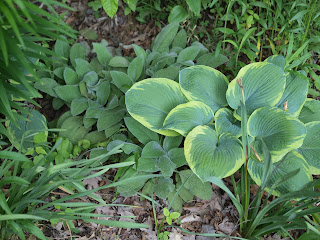 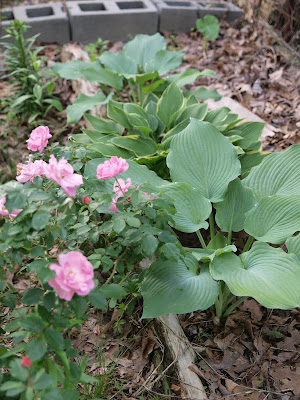 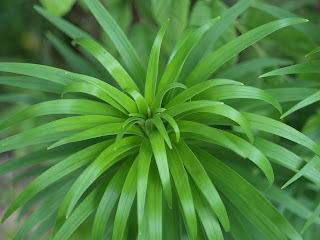 tiger lilies are getting ready, too - but a bit further off 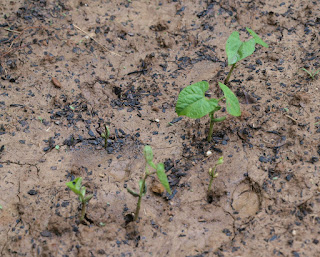 Posted by RheLynn at 9:10 AM No comments: 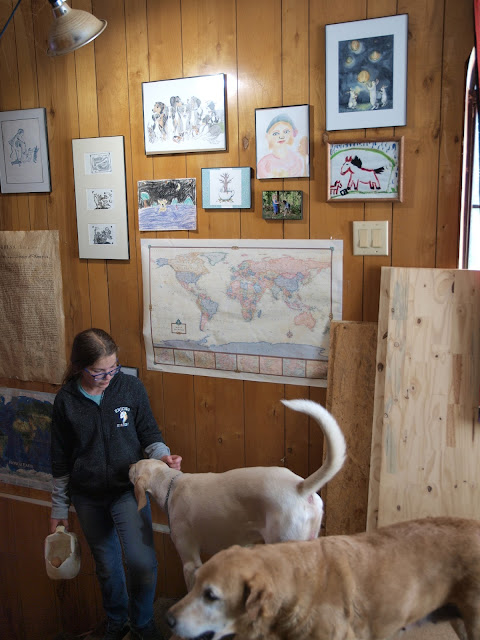 Esme, Kif and Tansy in front of the art wall
The print 'Lighting the Sky Lanterns' from Nakisha came today, and it was sort of for my Mother's Day... she was having a sale and I really wanted to have something on the wall from her.
Posted by RheLynn at 2:12 PM No comments:

read 'I Found You' by Lisa Jewell.. liked it much better than 'The Girls in the Garden' by same, which I read last month  I had to take a whole day off 'The Girls' because it was just disturbing me.  Actual 'worse' things happen in I Found You but it is very upfront peeling backwards of time - 'like an onion' the author says herself and has a clearly defined protagonist and antagonist - although the protagonist makes you wonder if under certain circumstances... but we know he is good at heart.   'The Girls' was sort of 'round-the-back-corner, maybe yes maybe no, you'll never really know who was the bad guy or if it was just an 'accident', will you now?' which annoyed me in the end.  Now I've got a silly free 'Highlander' type novel and another library book called 'The Bookshop of Yesterdays', which I'm looking forward to.

I've ordered a used copy of a herbology book that Esme had rented out of the library and kept overlong -- it should be here in a few weeks.  It has very pretty and detailed drawings of the plants.  I found a very cool diagram book of Automotive Engines and another on constructing Water Gardens when I was at the library returning the other.

Have begun working on crocheting a blanket in Minecraft 'creeper' colors.. didn't plan it that way, but the colors are the same *heh*.... Very nice yarn, though - LionBrand Homespun USA, bought on special, and mixing it with some Caron Simply Soft for a ridged effect and to stretch it out.  They're both soft.. and the Homespun USA is a beautiful marl but a bit heavy... so the SimplySoft balances it out.  I've finished six bags and working on a seventh.  I think I need to buy a new plastic bin tomorrow to put them in until it is flea market sale time.

We are going to visit the ships tomorrow if the weather cooperates!  Pics then.
Posted by RheLynn at 7:18 PM No comments: 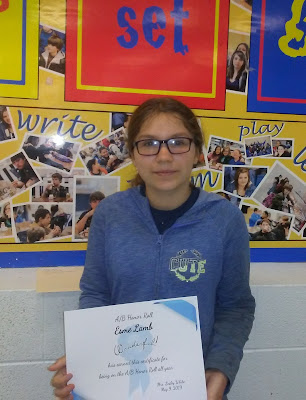 Esme got on the A/B Honor Roll for the year - and got excellence awards in Math and Science.  She held an officer position in her 4H for the year.  There was a little awards ceremony this morning and since it was my day off I got to go in to be there for her. 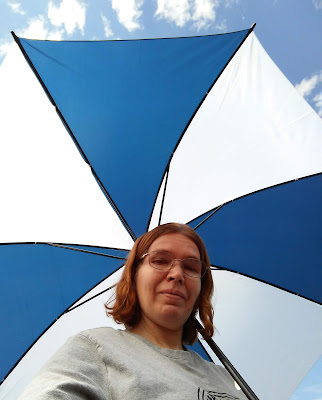 An extra umbrella I bought for picnic day this year - took a goof off picture at work to show Mark and Esme how big it was.
Posted by RheLynn at 9:35 AM No comments:

Wild geranium and others 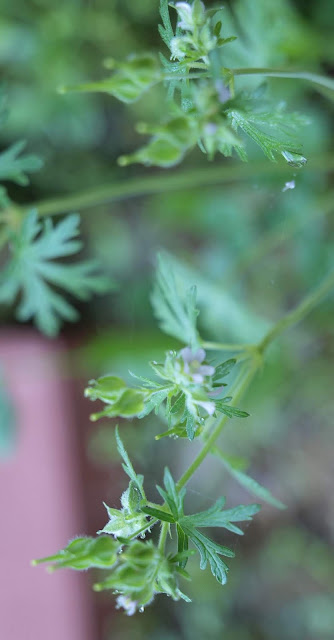 this is a wild geranium (above) 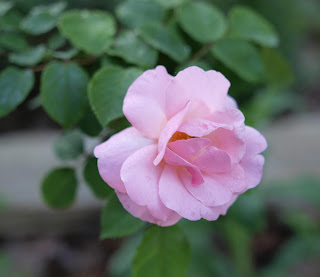 and some of our roses 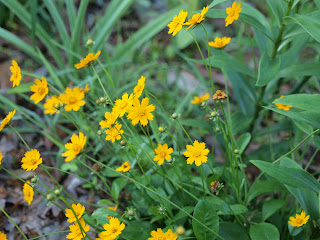 I've been working on some more of the genealogy notebook for Esme.. wondering if after I get it all handwritten down if I don't want to make a google doc out of it and have it printed out in a book form for real.  Have located the immigration records for the male line of both my maternal grandfather and maternal grandmother... and back a bit before that on both of them.  There is a Welsh connection on my father's mother's side, back in the 1580s.. a knight in Denbighshire, Wales.  Also, waiting on some photos to come in the mail we took at the fish fry the other day and copies of the 'tiny world' ones that I am going to hang up somewhere.  Waiting on some yarn, too - to make a blanket for the chair.

Read 'Girls in the Garden' by Lisa Jewell.. have 'I Found You' on tap now.  Was disappointed by 'The Umbrella Academy' because  I was NOT expecting a graphic novel and it loaded up on my Kindle in tiny tiny format and I was just not ready for that.. so I'm reading 'I Found You' now.. slowly... while crocheting more mesh bags for summer flea market stuff etc.

I also planted some beans in the garden - a mish-mash of some things that were in my 'landrace' box... white ones and tiger-eye ones and some black ones.  They are all things that grew here before and we ate them.  Got strawberries and peas out of the garden today.. lots of things are doing well out there.  I put a little scrap of Japanese Holly in rooting hormone and we will see how it does.  Transplanted some tomatoes and cantaloupe and watermelon seedlings into their own larger pots.

Esme's picnic day is Tuesday, collecting some things up for her to take, blanket and hat and umbrella etc etc..

Posted by RheLynn at 8:43 PM No comments: