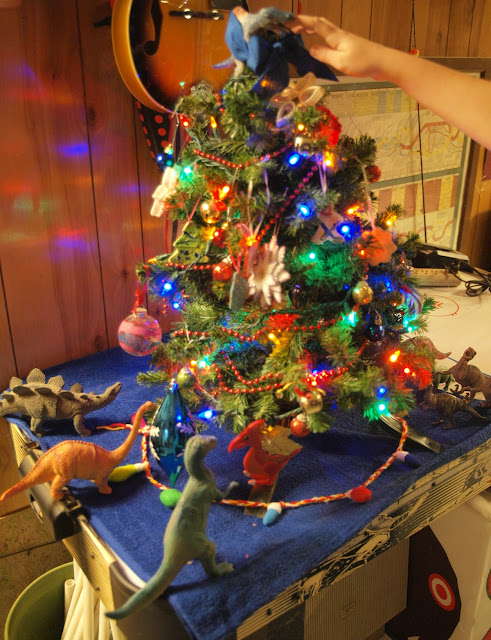 We dug out our Christmas tree tonight and had fun making a Dinosaur Extravaganza of it... all of these little ornaments are things we have made or collected in the past few years, and of course, our collection of plastic and vinyl dinosaurs.  I bought a new one tonight and tied it to the top of the tree as a tree topper! 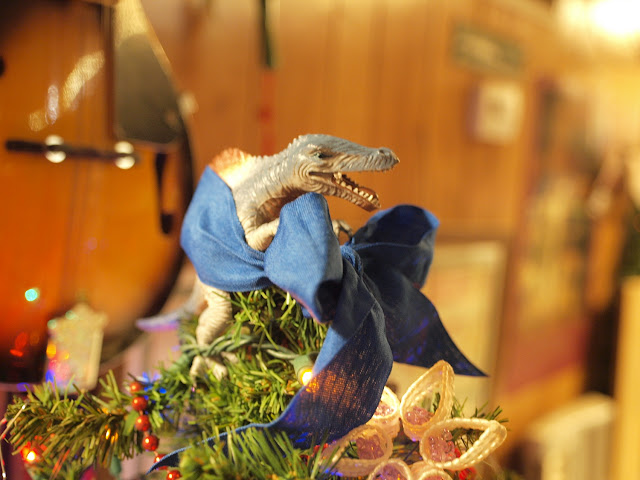 It was a Spinosaurus.. so I had to get it and couldn't call it a Christmas Present to anyone but myself, so up on the tree it went! We have not found our dog Freckles.  But, somehow, this skinny dog was in our garden the other night and Mark left food out for him as he wouldn't come to us.  Then the next day Mark convinced him to come inside to the warmth and more food.. and now it has been a week or more and he has a name and is in the routine with the other dogs.  We've called him Kif... after the green space alien guy on Futurama.  For one reason, I said 'poor kid' when Mark told me he was having a hard time getting around the house and then had crashed solid on the couch for hours.. but my phone keyboard came out 'poor kif'... but also, the other reason - it fits him.. he is very polite and worried about things and slinks around most of the time until he is right next to you being very much in your personal space, and then again, he is slinking away to a corner again to make sure he doesn't offend.  He is looking much better than this, already - having gained enough weight back so his ribs don't show.  Rex is doing a good job as a 'big little brother', showing him the ropes, taking him outside (which he needed, as he would rather hunker down and not get up until he needs to, and doesn't really like the stairs, so the first couple of days he had accidents because he was afraid to barrel down the stairs with the other dogs and would rather 'just rest up here' until it was too late.. )  He 's gotten quite a bit better, now.. although he is still hesitant. 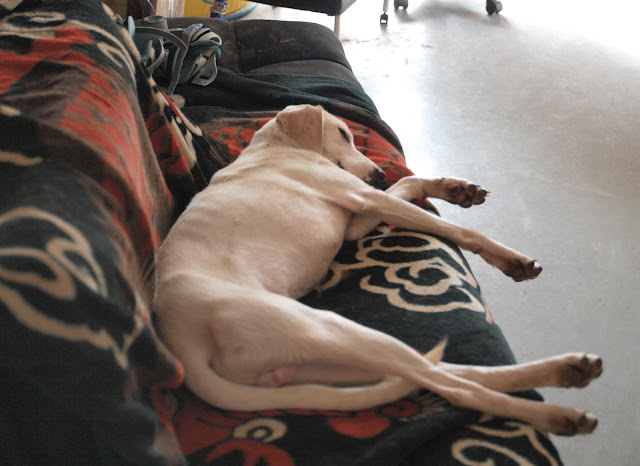 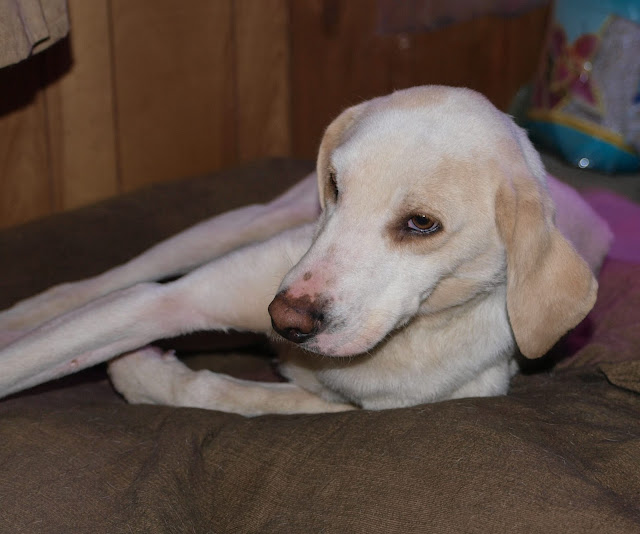 We did report him to the shelter as he had a stain of a collar around his neck, but no one has said they were missing him... so, he's staying with us as long as he continues to be a good kid.  We guess he is 1 to 2 years old, and the cats like him but he is getting a little pushy with them now - he must have had a cat at his previous home, because he thinks it is nothing to come up and push them with his nose and sniff them all over and then bark at them if they get hissy about it... and the cats are like 'Wait a Minute - WHO are YOU?'  What do you think you're doing with that Nose?'... That is another habit of his, he likes to put his nose ON you to sniff you.. and snuffle at things like our keyboards and chairs and shoes and etc... he and Rex have gotten in a little trouble pulling some cloth items down to lay and chew on.... taking liberties, but overall for a stray adult dog and one that was starved he is doing very well.
Posted by RheLynn at 7:38 PM No comments:

11th birthday at Grandpa and Grandma's house in South Carolina

I've been very late at reporting this, but earlier this month Esme and I took a serious trip - out to South Carolina, to visit my father and stepmother, Grandpa Harvey and Grandma Gale.

Esme's birthday was the fourth, and we went a little before that, to have time to visit the ocean at Myrtle Beach, something even I had never done before.  So, it was a pretty special occasion.

We flew on a plane to get to Columbia, South Carolina - changing over at Atlanta, one of the busiest airports in the United States.  It was an adventure there, too.  Esme was quite nervous about flying but she did really good (there still might be some fingerprint marks in the seat armrests on those planes, though!  kidding).

Esme got to see Mom at my 'most lost' when the rental car wouldn't start in the parking garage - but they gave us a different car and it was all good from there.  I also admit I lost the rental car in the parking lot of a Walmart we went to for groceries one time -- but we found it just as the parking lot police were about to come help us.  I also got lost a few times and had to work my way back with the Google Maps on my phone.  But I think she also saw that you don't have to panic and freak out - you can get out of these situations and learn something.

The day we went to Myrtle Beach Grandpa still wasn't feeling very well, and his oxygen tanks were low.. it was a Sunday, so I put on my brave face and Esme and I took the hour and a half drive to Myrtle Beach by ourselves, arriving just a bit after eleven in the morning.  We went to the boardwalk by the SkyWheel and then on to the ocean to gather shells.  I think we were out there up to our knees for a little over two hours ,then I made her come in, and eat something, and buy some souvenirs.. including a towel and a sweatshirt.  She really wanted a boogie board - and of course, to take it to the ocean and get completely submerged in the waves.  It was a 60 degree day at best.. with nice sunshine but a cold wind.  But armed with towel and sweatshirt I took her down to the beach again (after depositing like fifteen pounds of shells in the trunk of the car) and she rode waves for another 45 minutes.  Then it was quick put on the dry things and get to the car to make the drive home. 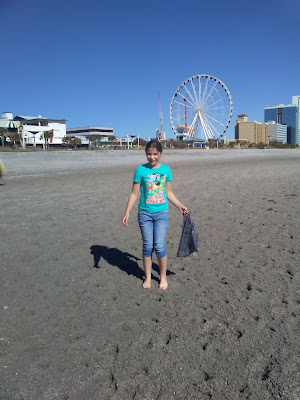 on the beach near the Sky Wheel in Myrtle Beach, SC 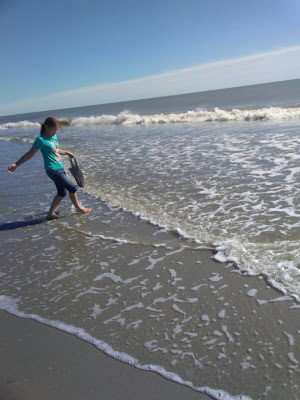 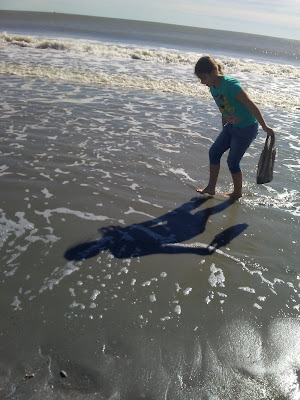 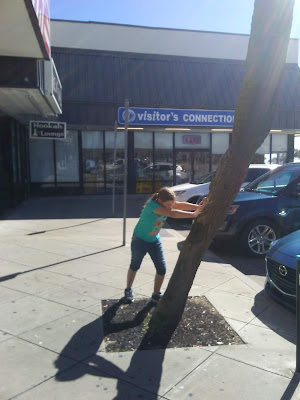 Trying to push over the leaning tree at the Visitor's Center 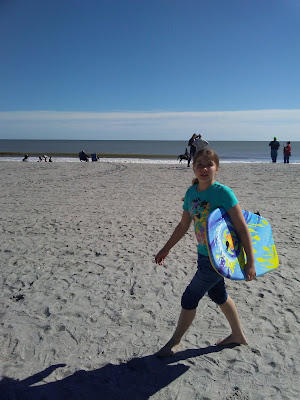 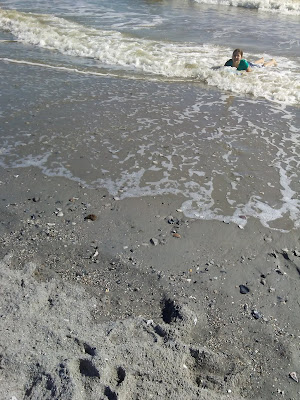 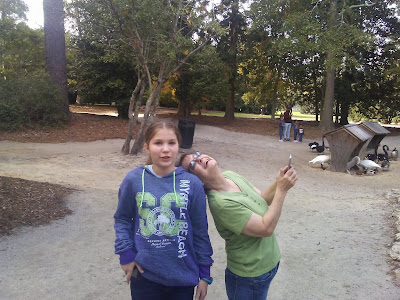 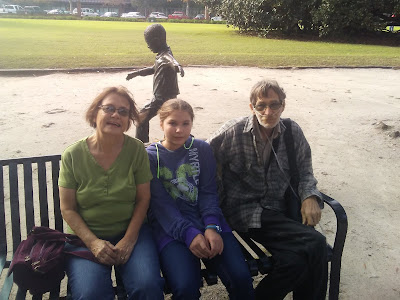 At the Swan Lake Iris Park in Sumter, SC 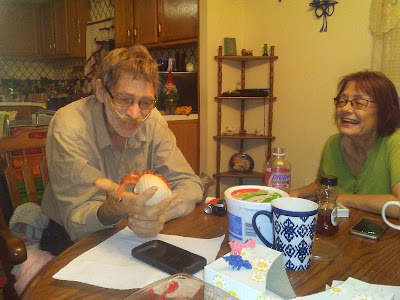 Grandpa and Grandma giggle at a toy hermit crab 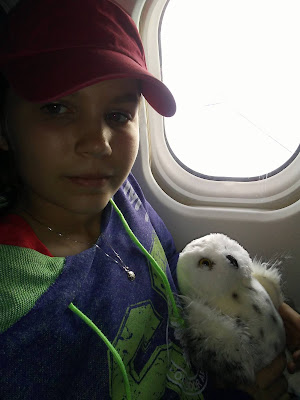 on the plane with her birthday gifts
tired and headed home!

Esme and her Grandma Gale made cupcakes together and Esme and I decorated them, and then they watched the Garfield movies.  The next day, we went to the Swan Lake Iris Gardens park and Grandpa came with us to see the swans.  Esme did get a headache halfway through there - but enjoyed seeing the swans and some turtles.  We grabbed some chicken and went home, and then Esme and I got a few more things at a craft store.  Later that night she opened her 11th birthday Owl, Harry Potter books and a sand dollar silver necklace I had gotten for her to commemorate the beach.  Grandma Gale gave her a souvenir net with shells that says 'Myrtle Beach' across the top which now hangs in her bedroom on the wall.

We had a great stay at Grandpa and Grandma's house.  Esme wishes she could have gone back for another day on the beach.. but she is happy with the shells and the boogie board and souvenirs and maybe a chance to go back in a few years (during a warmer time of the year!).  Grandpa said we probably got as good of a haul of shells as we did because it was the off-season for beachcombers.  When I finally asked Esme to come get in her towel to leave a six inch long blue conch shell (almost complete) washed up right by her elbow and I told her it was the Ocean telling her to listen to her Mother and it was time to go ;)  heh.

We made all the connecting flights back (although I got off at one wrong exit on the way back to the airport, backtracked and got back on) and Daddy picked us up at the Nashville Airport for a long drive home in the pouring rain.  We were so glad to be home and to have everyone together again.

One bad thing happened while we were gone - our dog Freckles ran out into the woods, maybe looking for us because we were gone, and she has not come back.  We have to expect the worst.  She was an excellent little dog, and we miss her.  Her sister Lucy, especially, misses her.  I got a sinus infection after getting home, as well, and that took up all the rest of my vacation time trying to get human again. 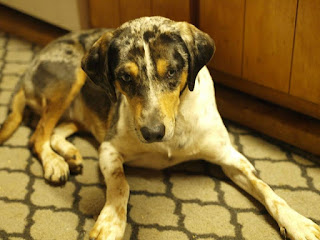 I'm putting together a 16 by 20 poster frame of some of the pictures and ephemera we collected on our trip.  I'm going to hang it in the hallway beside the crayon drawing of the beach (and oddly, a plane overhead!) that Esme had made years ago 'in case we ever went to the beach it would be like this..'
Posted by RheLynn at 7:55 PM 1 comment: