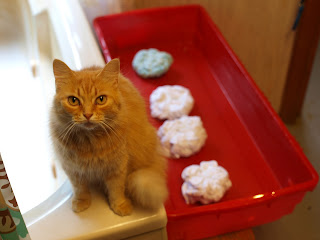 We did tie dye the other night.. they turned out nice but still with quite a bit of white in them.. we might go at it and tie-dye them again.  Mark bought a bigger kit and some more shirts.  I think I tied them up too tightly the first time. 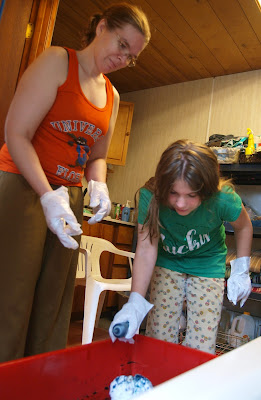 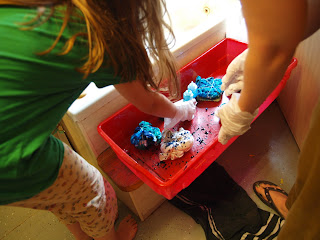 I tie-dyed a feew of our old shirts too.. they turned out pretty cool but again, might throw them back in for the second run.

We also went to that birthday party - I think it was good, Esme had fun.  I tried not to let my inner introvert keep me entirely in the corner not saying anything.  As always, I go over everything in my head and hope telling that story about Esme almost drowning wasn't too much, because it is an emotional story and the reason I keep checking the window every thirty minutes to see that she is okay in the pool... even though that was eight years ago... it sticks with you.  I think I did good not to actually be by the pool so I didn't watch her like a hawk, just peek through the curtains every once in a while.  Mom stuff.  She'll understand when she's older.

She's reading a lot of Warrior books.  I'm glad she likes them.  I've ordered a few others in the mail for her, one of those and several others I think she will like.  She has read a few Erin Entrada Kelly books and they are about kids her age and problems they face with their peers in school - good books, I've read them too.  I have one of those she hasn't read in there, too.

Work is doing its doctrine change again - but I'm taking this one a bit better because it matches some of my own feelings about what we are there for this time.. once in a while it rolls around from 'really?
to 'well, that IS what we do'.. the great cycle etc.  After reading all the new emails I can't get 'Hey Jude' out of my head when I'm cleaning displays I'm thinking 'make it better'.. I guess that is the best outcome.. I can make it a little better every day without losing the flow we have with the customers... improve just something somewhere every day instead of going all bonsai and overdoing it all at once.
Posted by RheLynn at 7:37 AM No comments:

Our garden is putting out cucumbers daily.. and I found a few little recipes to do something more than 'slather in mayo'.. which is generally what I do with the first flush of produce, and it works well until there are just too many to eat that way.

Cucumber mayonnaise salad
Wash, peel and chop up  cucumbers, you could salt them for a bit and then  drain it later, but I usually don't when it is just for lunch the next day etc.  Layer the cucumbers into a dish that can be covered with a lid.  Take real (like Hellman's) mayonnaise and slather about a tablespoon and a half over the top surface of the container.  Put on the lid and the mixture will become a salad overnight.  Good with turkey on a sandwich, or beside curry rice.

But now I'm branching out a little and trying to preserve the cucumbers as a relish or pickle without going through all the trouble of canning a big batch.  I've tried 'refrigerator pickles' before, and didn't really like them.  So I'm leaning more towards the relishes.

Did a Japanese relish last night that is meant as a side dish to rice and vegetables.
Ccumber cut up fine, salted and let sit for 10 minutes, rinse and drain.  Combine in a pint jar 2 tablespoons of white sugar, 4 tablespoons of rice vinegar and a little ginger.  Add a cup to two cups of diced cucumber.  Mix up by covering and shaking the jar until all is combined.  Let sit overnight in the fridge - keep for up to a week I would think.  These turned out sweet and sour, good beside some fish sticks and cantaloupe, but still very cucumber-tasting.

I'm going to try this one tomorrow - it is a bit more involved. I like the celery seed and turmeric in the recipe.  Even the Japanese relish with different spices in it could be a really good way to use the cucumbers.

This is the base recipe I'm going to try:
Spruce Eats sweet relish

It requires the cucumbers to brine for 24 hours... which means not any progress until tomorrow night.  I'll come back and update the post with what I _actually_ put together in my jars.. as I never actually follow the exact ingredients.

Mark says I need to get more pumpkin recipes, as we have a dozen pumpkins coming on the vines.  I actually have a cookbook for that!  I need to do more with the peppers, too - probably pick them and save a few for the relish but mostly bring them to work for a giveaway.  They go over really well.

//In the meantime.
We have almost all of our school shopping done.  Esme wants to tie dye some t-shirts so we bought a kit and some shirts.  We got her shoes, and I have almost everythign washed and ready.  A few school supplies are still coming in the mail, then we can put the binders together we are supposed to have.  We went to the library again today and she exchanged her Warriors books for the next in the series.  She has read four of them now, and the Evolution of Calpurnia Tate, which Mom insisted upon (because of the vet series Callie Vee, she read one of).  She is also getting into The Sixty Eight Thorne Rooms.. which I tried to read to her but it lost the magic when you aren't right at the keyhole with it... trying to explain things, trying not to skip over but not take forever reading a paragraph - it is different than reading it yourself.  We also stopped for ice cream with her certificate from the summer reading program.  We're both playing with new mods from Minecraft - IndustrialCraft is the big one.
Posted by RheLynn at 8:02 PM No comments:

School starts back August first, so I am worrying about getting all the things done before then... took a good chunk out of the shopping last week and ordered a lot more online this year than we have before.  Finding Esme jeans that fit was the hardest part this year, and I still don't think I did really great but we found something in junior petites that fits with a belt.. and isn't too small, so if it is a little loose now she has room to grow into it instead of just out of it... and I ordered a few that she has been wearing off the website since there were none in store...  We'll have to do shoes next week.

Esme went to a pool party on Wednesday and sleepover, and I crashed that night.  I had an early morning at work today, and a late one tomorrow.. so I'm fighting crashing for sleep right now.

Was listening to the book 'Black Rabbit Hall' by Eve Chase.  Some poetic melodic language in there...  was falling asleep to the lady's English accent but some oddly pronounced words just kept jerking me back.  It is a sad and mysterious tale that so far, I'm not sure what the point will be, but will see.. 1/3 of the way through that and I have two other books that have come up on my library wait list that I need to read soon, too.  Haven't finished the mystery I got from the actual physical library, or spent time looking through the dinosaur book, yet.

I've been playing a lot of Minecraft 'empire mode'... which isn't a real mode, just me making house after house across the map into each new territory, making each new place into its own 'estate' with resources and a name and its own flag etc etc... It's all on survival mode, monsters on, advanced hunger mode which makes you scrabble to create a steady food source or starve ... my favorite way to play, but again, it falls to not really having anything solid after all that time spent...  It is interesting to see the complexity grow over time as resources are found, spread around, technology becomes available (by finding resources) and how the latest houses are three stories and grand instead of little two room quick-builts.  The importance of a full kitchen in these is showing, too - a well, all the bakeware in a cabinet, taking the time to make the salt and the dough and grow the spices to pickle the cucumbers and etc etc...

Cooked several things in REAL life - peach soy ginger sauce for stirfry, and 'refrigerator-canned' peach and strawberries in syrup which we had on pancakes last night.   Planted some extra beans and zucchini in the garden the other day, have to do some more carrots but need to revamp three hard clay pots to do so, so, haven't yet.

Mark and I made a new chicken shelter by putting a split barrel over an A-frame of wood on legs.  It kind of looks like a fat hollow pig without a head.. and the chickens might be using it .. hard to tell if they understand it is to be their 'roof' in their cage to keep out of the rain - until it rains.. hmm.

Work was crazy today, nonstop, and all over by 3:30... which made it even weirder.
Posted by RheLynn at 7:13 PM No comments: