We'll be headed through the Twin Cities when the Republican National Convention is on - so Mark suggested we bring some KnitOwl elephants :) This is a new (sort of - I shrunk Bumblephant freehand) original pattern from KnitOwl (me!). 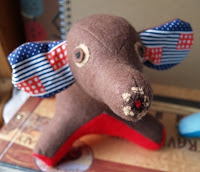 Showing some Stars and Stripes 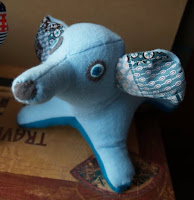 A few more days until we head off on our trip!

One Week and Counting

Mark and I and Esme are headed to Minnesota and Iowa in about a week. We will visit my father in Iowa (Hi Litljon!) and my Mom and crew in Minnesota. Esme will most likely get to see her cousin Elizabeth as well, which will be a great time for photos.

Pogo's kids are up to regular kitten antics. 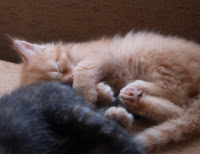 As is our own little kitten... 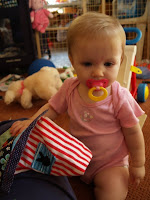 A fabric book I made her among the jungle of toys 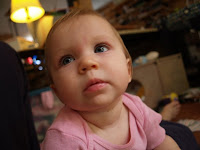 Esme has been experimenting with the word 'Mom' now. She doesn't quite use it to mean me yet. Mark says it seems like her universal word for 'I want something' which could be pick me up, feed me, find my pacifier etc etc... I keep answering her though when I'm around hoping it'll help her get the connection. 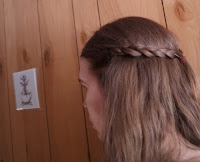 I dyed my hair brown, about two shades darker than the natural color. This picture doesn't give true justice to how dark it is in the front. It'll wash out in about a month but so far I like it better than the temporary red I usually put in it. The print on the wall is 'Bunny Tea' from Noosed Kitty Etsy shop. It is really cute with two bunnies peeking out of a teacup.

Other Etsy shops to catch my eye today/lately:
Dennis Anderson soap company. I've been buying his Ginger Vanilla soap for a while.
Mountain Shadow Designs Czech beads. Their Picasso beads are 'Gypsy Jewels.'
Handmade Pretties recycled wool art shop. You have to see her baby sweater balls and pincushions too, so inspiring!
Jessica Doyle has a whimsical and unique art style
Papaver Vert's felt bowls and canisters can inspire any knitter!

Blog Shout-Outs:
You gotta go see Ladysnail's lion drawings and Madame Bogg's parrot and Net at AreaThriftyOne's works in progress :) That is all :)

Esme cut a third tooth last night. She ran a fever with it but is better now.

We've contacted my Dad in Iowa. We're going to stop by there for a visit too on our way up next week or so. Wow the time is flying. I requested this vacation months ago and it is almost here.
Posted by RheLynn at 6:51 AM 1 comment:

I was thinking of some sort of long bag to put brushes and other things in for storage / travel etc.. and did some research online as to what kinds of containers were usually used for that purpose. After doing some searches for anthropology, nomads etc... I came across the term 'torba' which is a long bag nomads use for storing household goods. It is a Turkish term, as far as I have seen.

Links:
Posted by RheLynn at 8:11 PM No comments:

Added some stuffing and reinforcement to his legs. Sewed a lot of areas down tighter and he almost doesn't need support now. Quite a bit more to go but I like him so far! 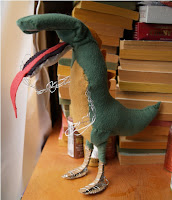 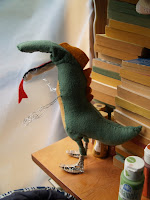 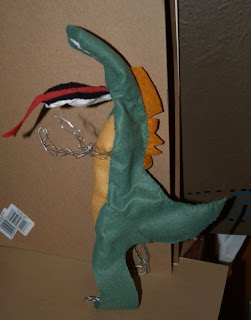 Adding felt skin
Posted by RheLynn at 10:28 PM No comments:

On My Desk: Crafting Wire Sculptures 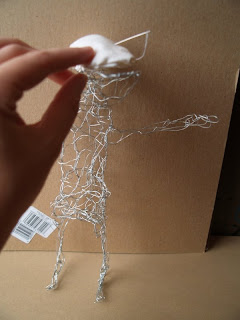 Lizard monster, stage one
Posted by RheLynn at 7:52 PM No comments:

Pogo's child is full of grace... 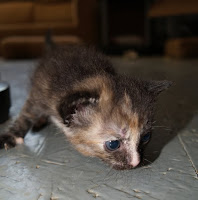 Pogo has kittens again.
This is the girl, and she is truly stunning.
White toes here and there, just like her mother.
Posted by RheLynn at 6:42 AM 5 comments: 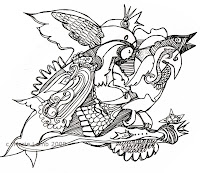 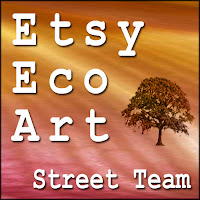 I've become a member of EEA team, Etsy Eco Art.
Each member seeks to depict the natural world through their own unique visionary style. 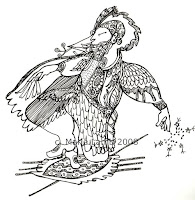 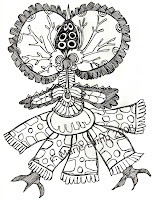 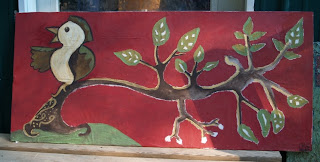 But I'm happy with it.

Posted by RheLynn at 6:31 AM No comments: 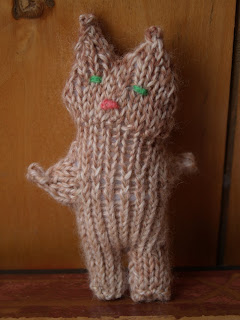 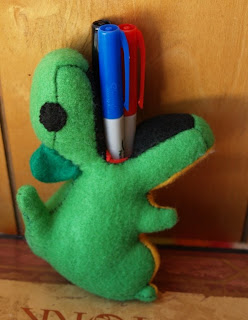 I had several custom alien orders to get out this week. Sometimes though, you also have to make or finish a few other things hanging about to get into 'process mode.' A few pictures of some of those process creations.

On Saturday afternoon something happened at work, still not sure what, that started me going on a semi-severe allergic reaction. I had bright red and pink hives spreading out from my neck, down my shoulders, up the side of my face etc... Benadyrl from an ER doctor put it down for about six hours then it continued it's march across my face, arms and stomach. Everywhere the rash spread cleared up four to eight hours, leaving only a slightly reddened surface behind. The rash continued in an 'orderly' downward and outward spread from the original point. That was actually the most confusing part, that it was so regular in pattern. I went to my doctor on Monday morning. She gave me a steroid shot. The hives have mostly subsided now but it was definitely something I don't want to happen again. Doctor couldn't explain the cause of it. She said most cases like this if the person doesn't know themselves what triggered it a doctor can't pinpoint the cause without allergic reaction tests. The pattern of spread was 'systemic', something following the bloodstream?
Posted by RheLynn at 12:29 PM 4 comments: 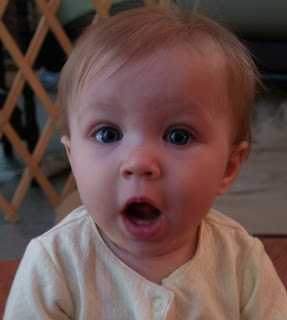 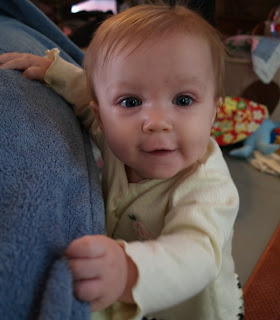 Fuzzy headed after a bath and grinning 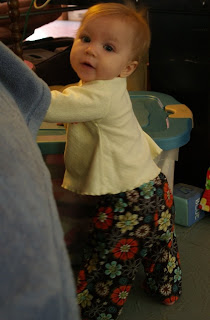 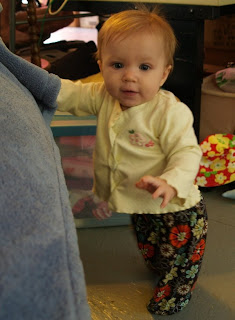 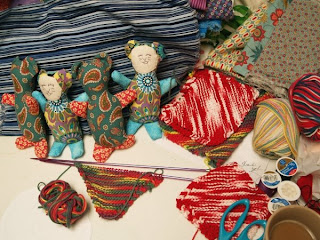 It's Friday, so it's a little late for this. But then, I've been working and haven't posted an 'On My Desk' for a while! Lately I've been covering two departments at the same time every night of the week, closing shift which includes putting away the freight truck while cleaning the areas up and serving the customers at the same time... and that was wearing on me some. Mostly I like my job - just that shift 5 nights in a row with nobody else in my department was getting to me a little. I had today off and start all over again tomorrow.

On My Desk is: Four unfinished mousebears for Kara, and several knitted dishcloths. Also some new fabric and yarn.

So why all the dishcloths? I've finally told my mom that we are going to visit in September. So there is a little anxiety there... Now I mostly knit when I've got something brewing on my mind -- and this is one of those occasions, even if it is mostly subconscious brewing.

Read all three of the Little Fuzzy books again. Love that series. Also have another book by H.Beam Piper 'Uller Uprising' which I had not even heard of before. But then, I wasn't really looking for non-Fuzzy books at the time I was reading him.

Baby Notes : Esme has two teeth now. She has learned to clap her hands, although she still sometimes misses ;) She is trying to 'fall forward' onto things when going from one cruising surface to the other, which is closer to trying to take a step! She is also saying 'kee' every time she sees Pogo cat, which is her version of 'kitty' :)
Posted by RheLynn at 5:51 PM 1 comment: