It is Halloween.  It is too cold.

I have been reading The Last Lecture, by Randy Pausch, almost through with it.  I'm getting a bit better at Go (the game).  Did a tiny bit of work on some writings, today. And my tile finally came in, so I can schedule a meeting for next week (finally).

Preparing to send out more books.  Looking for ways to advertise my vanity top / shower business. 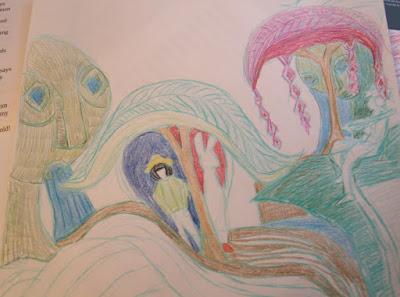 A small unfinished sketch for some worldbuilding I was doing in a story.
Posted by RheLynn at 1:43 PM No comments:

ach bit a dda gan i 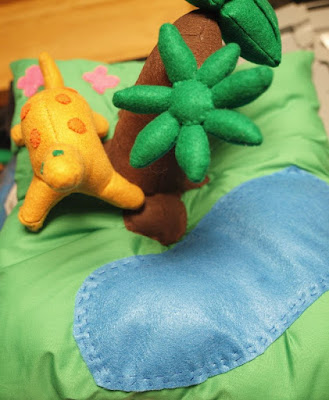 This was something I made five years ago and sent to a little girl.  It showed up in my memories.

My brain is all over the place.  I found a cool site with a forum full of people who do 'everything'.  It is a bit overwhelming and empowering.  They love languages, too.

Knit a washcloth, working on a scarf.  Making banana bread today.  Waiting on tile samples and a faucet and thinking about how I am going to set up my shower display in the garage.  Reading Seneca and Simone Weil and 'The Last Lecture' by Randy Pausch trying to keep my level.  Went out on a jaunt and took pictures of the Fall before the rain, and also found a tile sample, and two new places.  Should have pushed myself to stop into a third and/or a fourth but my teeth are hurting quite a bit.

Need to call the dentist and ask about them extending my antibiotic prescription since the appointment is so far out I'll be done with these long before then.

Playing Go, chess... looking at my other DaVinci plastic kit that I've never opened.. did the other one and it broke after not very long at all (did it with Esme) and it was such a pain... but still I'm considering it -- doing illustrations and stories... Mark wants me to look at programming a bit more and I am not sure if I can open up that part of my brain right now with the tooth pain.  But really I probably won't know until I try.
Posted by RheLynn at 7:35 AM No comments:

I'm back from my trip to South Carolina, have been since the weekend, but had to deal with some tooth pain during then.  Moving ahead on my bath design work looking for some tile that matches a shower, ordered the vanity top etc ... Today I am going to get the vinyl sign put on the car, and mail out a few copies of the book.

I collected a few more of my short stories together, working on pruning that, and writing more.  Tried to sit down the past few days and put some of my synesthesia and driving thoughts and dream images into a few scattered stories to come back to.  Found a few others that were half-written in my archive and added them in to look at, too.  Two more I remember but can't find.

During the worst of my tooth pain I had a few hours there where the pain came through as light and color.. it was pretty and gave me a bit of a break, but it came back to being only pain after that.  Synesthesia has its uses, but right now the world seems a little dim and black-and-white because the light and color in my mind's eye were brighter.  I guess this is where I get some of my weirdest writing from *heh*

Got a list of things to do today.  Brew the coffee, throw a few eggs in the microwave and get ready to go do it.
Posted by RheLynn at 6:48 AM No comments: 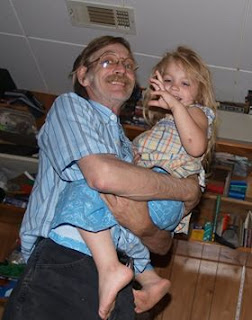 Harvey John Winger was born in 1951 in Grand Rapids, Minnesota, to Howard and Florence Winger.  He grew up in the Lawrence Lake area and attended Greenway High School, graduating in 1969.

Soon afterwards, he entered the Marine Corp and served in Okinawa, Japan and Vietnam.  He married Josephine Hurlbut in 1976 and later divorced.  He married Gale Luoma in 1986 and lived in Longville, Minnesota.  In the 1990s, he went back to college in Staples, Minnesota, earning an associates degree in his passion, robotics.

He also lived in Iowa, in Council Bluffs and Traer, living there for 15 years.  He was known as Grandpa to many and very active in his community.  In 2015 he moved to Sumter, South Carolina to work for Caterpillar, programming and troubleshooting the manufacturing robots.

Harvey loved being with family, COFFEE, his robots playing chess and his books.  He was very quiet and shy, unless you brought up his favorite subjects, then he would talk your ear off.  Although he was quiet, he had strong morals and values and was not afraid to speak his mind to help someone back on the right path.

Harvey lost his battle with COPD on October 11, 2019.  Even when he was sick, he encouraged and offered support and advice to so many in our lives.  He leaves a strong legacy of love, patience and kindness.
Posted by RheLynn at 6:30 PM No comments:

Tuesday night my stepmother told me my dad had gone from months to days left.  I was going through all the scenarios... how to get to them, what to do with my fledgling business whether to bring Esme on this trip when i might not be best and would be the driver on dangerous roads...  etc  And we had a plan to come by morning... but I also had this dream.

There was an old man I did not know, bald, wrinkled, quiet, smiling.  He was sitting in a roofed canopy at the top of a mountain, and like a child I sat beside him to his right sort of draped over his shoulder.  I was trying to look at something in his hands.  He was holding little rolled and crumpled pieces of bright royal blue tissue... like kleenex someone got wet and then rolled the wet clumps up in their hands.  The bits were lying naturally in the creases of his hands, lying gently on his lap, palm up.  He says to me: " I wonder what will happen."  And naturally, I begin to wonder what would happen, too.

The thoughts formed and washed away one after the other.  Would they turn red?  Would I add red with my fingers as if by magic and they would turn purple?  Would they unfold or would he drop them to the wind or would the wind come all by itself and blow them away?

I want to look at his face to see if he will say more, or if his eyes will say it if his mouth doesn't.  But I do not look.  I can't stop looking at them for fear something will happen.  And I am equally scared that by expecting something impossible.. a miracle.. I have missed what he was asking - what he was trying to teach as a lesson.

I ask my heart what I honestly wanted the little tissue paper crumbles to do and it responds it wanted them to unfold into great ribbons of silk starting small and travelling forever down the mountain before us like rivers to the ocean.. shimmering and beautiful.  And since I knew that was too much to ask I almost didn't let myself even dream it.  But at that same point I learned the lesson that I want to know more... more inside, more than can happen.. I want the Universe to speak to my heart and I must be open to listen and try...because otherwise I will always be wondering what could happen.. what will happen.. and what would have happened if I was brave instead of afraid.

At 1:48 on october 11 my dad passed away.  I was here after driving Esme on that same long road highway i didnt think we could have driven last year.  We're doing our best to hang together and i am trying to do all the best things to make this terrible time easier for my stepmom he would of wanted help for her.  She has had so much support which is good and i know there will be a continued outpouring after esme and i go back to tennessee.
Posted by RheLynn at 6:40 AM No comments:

I've worked on this book for about five years.  It also has my own original illustrations.   It is a love story, a rescue, and a revelation.  The genre is magical realism or urban fantasy.

Although it begins as dark surrealism, it revolves around hope and perseverance.

'Bran exists but only in apathy.  Isobel doesn't exist, but wants to.  Paul, trapped between the worlds, is prisoner to the watch.  Ingrid, a tiger with her claws the wrong way in, blames herself for surviving her brother's death.  To save them all, Bran must learn to fly,"

I have several other stories in the works, they are young adult novels about heroines.  This is much more literary, dealing with some dark but important topics.  It was the first book, and it wanted to get out the most.
Posted by RheLynn at 4:19 PM No comments: