It rained for like three days straight... hope it is over for a bit now.  We've nailed down the dates for going to South Carolina to see my dad.  I sent a few birthday presents on to them so they will be t here and we won't have to take them on the plane.  Esme had a great weekend with the J family to celebrate G's birthday.  They went to St.Louis Zoo and had a blast.

The car has a name - it is Lydia.  I'll just not go into explaining but it has stuck and that is its name.  I've ordered some special bumper stickers that will make 'reference' to the name as an in-joke between Mark and I.  Let's just say she was the topic of a song on the Muppets, and the words chosen are from that song, although that song is not why I named her Lydia in the first place.

Other bits.
I've kept going with my Welsh, and can almost understand the children's book third chapter I was working through without going to Google translate.

Did a little crocheting - a hat with two colors of yarn and a metallic thread intertwined.

We really need to get the chicken yard finished - they were so miserable during this rainstorm, but really just because being wet they didn't want to huddle with other wet chickens in the only dry place and the dry chickens kept kicking the wet ones out or something to the effect....
Posted by RheLynn at 7:54 PM No comments: 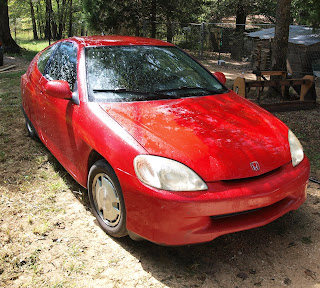 We drove a couple of hours each way to look at this Honda Insight, and came home with it.  It is in very good shape, and we hope to keep it that way.  It is a hybrid, meaning it has a gasoline engine and an electric battery that combine for really good gas mileage.  It is also about sixteen years old... but it is really hard to tell that because it was kept so well.

It is a two seater.. with a hatchback.  We had told ourselves we were looking for a four door... but this was a good deal and the specifics of the car really interested Mark more and more as he looked deeper and deeper into it. 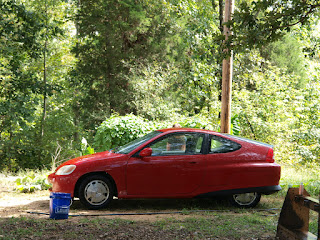 Esme got some extra allowance today giving the new car a good wash down. 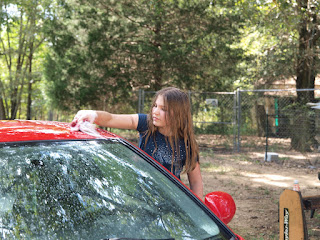 I've been a bit absent.  We got the home loan and have begun lots of projects.  The tractor went into the shop  - we worried briefly that the pole garden would get torn up bringing it out of its storage place but the man who came to get it was some sort of genius and made a very complicated maneuver look easy.

So, tractor fixed and we can get gravel and fix the road.  Have to call the insulation guys, they said they would be out here Wednesday to estimate and they did not call.  Mark has been looking at used cars.  I ordered the panel for the bathtub to fix the disintegrating wall.  We plan on remaking the chicken pen for winter this weekend.  I've been looking into airfare and such for the trip to South Carolina we want to do in November.  So, very busy.

I've been doing my Welsh every morning, since I close every night at work.  I've been putting a podcast on my to-do list every day so that I will actually take some time out for it.  I've done a little Japanese and some Spanish, too.  I really dislike Spanish - how it rolls through my brain.. but I'm trying with a new app that has good reviews.  It feels weird that even Japanese can find root in my memory quickly and the Spanish rolls around instead.. and it is quite a bit like French so why can I listen to French and it comes back out correctly but not Spanish?  Probably just a wall I need to break down.  I secretly think it is because of the different versions of Spanish between learning apps and my brain knows they are not the same 'slot' but can't sort between them without lots and lots of input..and I don't do enough ever to get that sorted so Spanish just feels 'hard' when in fact it is two or three languages.

And I've been listening to the audio book Willa of the Wood... audiobooks take up so much time.. I couldn't get my hands on the paper copy and I really wanted to read this story after liking the Serafina series so much.

There is a drawing I want to make - a couple, but haven't gotten myself the photographs that I should in order to make progress there.

Esme's friend wants to take her to a zoo and museum next weekend.
The weekend after that we have a birthday party to go to that I already promised.

I feel a little bit of overwhelm on some of that coming .. but baby steps and don't let the full calendar loom at me I guess.

I've given away what.. ten pumpkins now?  And we still have about ten on the table.  One of them weighs in at forty pounds. 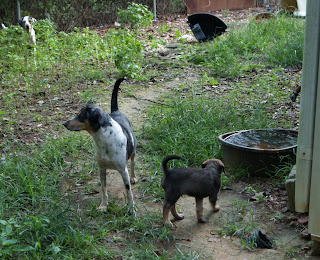 Rex is growing, he is twice as big as when we found him.
Freckles and Lucy were the last to really warm up to him - they were the puppies before he came along .. and now they are playing with him in the yard and rubbing him in the dirt.  Also, since he is bigger, they aren't as likely to make him squeak, which they were probably worried about. 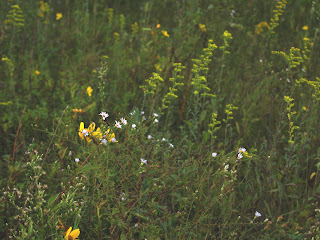 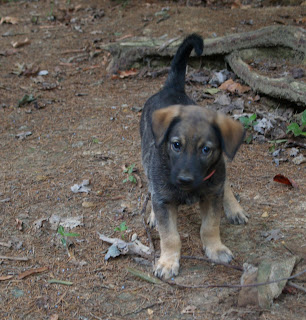 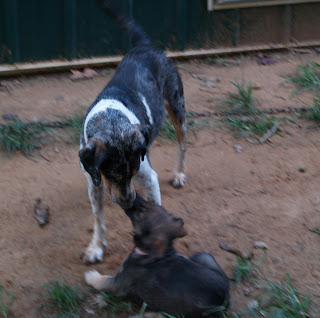 Freckles and Rex in the classic 'your whole nose still fits inside my mouth so there puppy' pose we have seen time and time before...
Posted by RheLynn at 5:04 AM 1 comment: 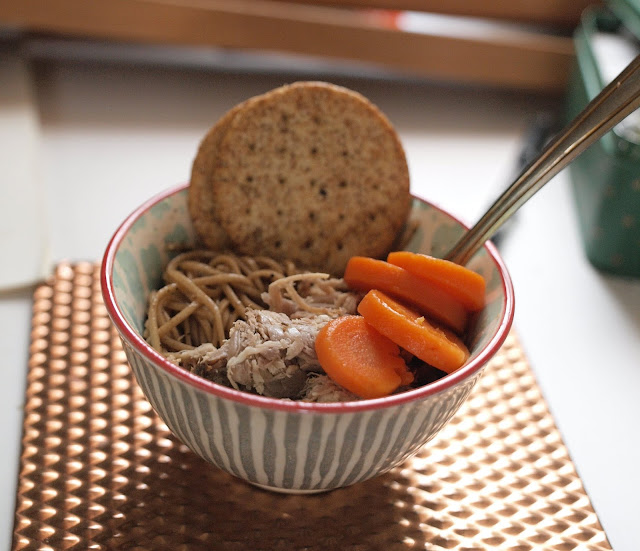 My soba noodles came in on the special order.

Take about one to two fingers-width of noodles and put them in boiling water for a minute to two minutes, drain, splash with cold water, drain again.  Toss with soy sauce and extra virgin olive oil until well mixed (about a tablespoon of oil and a little less of soy sauce).  Grind black pepper on top, mix, grind again, mix.

I used to eat this combination nearly daily in college, because it required so little to put together - you could even use soy sauce packets instead of the refrigerated bottle.

This is one of my favorite meals, along with a few sesame crackers or other dark grain.
Carrots and/or green onions or broccoli go really well with this.
The pulled pork was from Mark's roast the other day - and it goes really well, too.
Posted by RheLynn at 10:05 AM No comments:

We've had Rex for a week now, he's a very good puppy - has the idea of going outside with people every time he gets up for a nap ingrained in him (although sometimes it is hard to get all the way to the door quick enough if we don't have our shoes on)...

I've been studying the Japanese and the Welsh together.. interesting parallels there especially in the time area.

Reading a series of books found from a book review.. waiting on my soba noodles to arrive.  We're going to the bank tomorrow to secure our loan for doing the insulation and the barn.
Posted by RheLynn at 8:41 AM No comments: