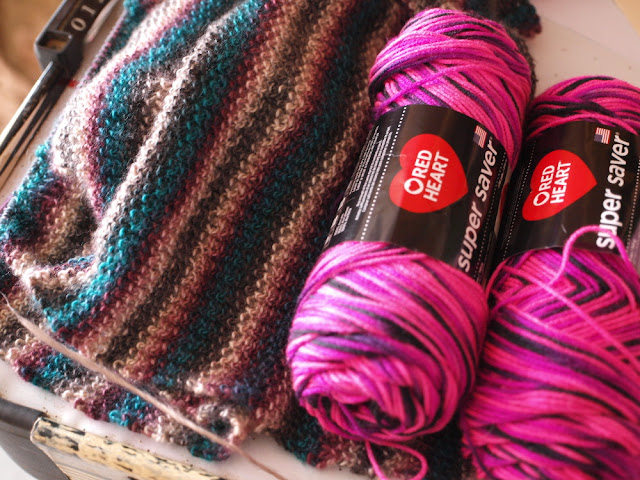 The current knitting project and the next one.  Esme did go to school today - so she'll be in the third grade class picture.  I work late, then very early the next day.  All the changes at work and they give me a back-to-back, too.  *yikes*.
Posted by RheLynn at 6:17 AM No comments:

I'm continuing to work on the seed stitch scarf/shawl in the Christmas yarn.  And I bought some new yarn in bright neon pink and black for a new scarf for Esme.  I haven't started that, yet... but it might be something I could pack up and bring back and forth to work for me.  Big changes at work... again... *sigh*  Esme was sick today, but seems to have recovered from drenching the kitchen sink in barf this morning (after complaining of a headache and taking a dose of Children's Tylenol, only to lose her cookies immediately afterward)...  Mark said she was bouncey and even wanting to play outside - so he made her do one of her homework projects and sit down and read a book for some of the time.  I've been fighting a sinus infection, too... not sure at all what her issue was but we'll see how tomorrow's wakeup routine goes.  She has class picture tomorrow.

I'm reading the 'Curse of Clan Ross' trilogy that was free on one of my ebook sites.  I really liked the first one - didn't see that neat little bow tied up until just at the end.  And now we see how they'll untie it and tie it again in book 2?
Posted by RheLynn at 6:45 PM No comments: 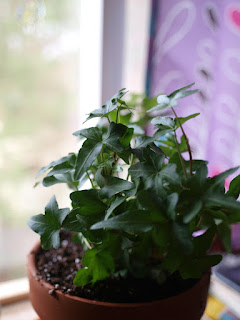 I adopted a wilted ivy plant from my workplace sale the other day - it seems to be quite at home in the collection.  Today I plan to go out to the new yarn shop, 'Skeins Up' in Paris, TN.  They are closed Mondays, so I've been waiting for today to go. 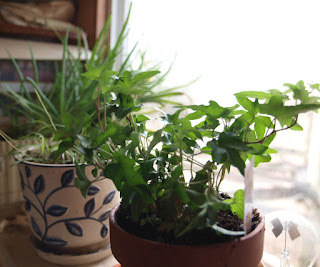 We have an aloe vera plant, a pot full of babies from our spider plant, and the ivy in this terracotta pot we had in the garage.  It had been all winter inside without sunlight and drastically changing temperatures - the plant specialist said it was probably 'done for'... but we'll see.  It was worth a try and I think it likes it so far.

Posted by RheLynn at 4:44 AM No comments:

We went and installed Grandma's Christmas faucet today - and it went pretty smoothly except for getting the old one off.  We used a plethora of tools, and finally between Mark and I we got the old one loose.  The new one went on easily and I hope it lasts a good long time.

Esme got straight A's on her report card - all 97s and above.. pretty amazing.  She said she thought it had been a 'bumpy' week last week because she got a B on something and she didn't think that was possible to have an A then.

Our old Maytag washing machine is down for a bit.. we're trying to fix it or take it somewhere to get it looked at.  That is on the agenda for tomorrow.  I've also got to make my Sweetie dog a dog bed in the next few days of vacation... and that is almost everything checked off the list.
Posted by RheLynn at 6:53 PM No comments:

Painting of our road 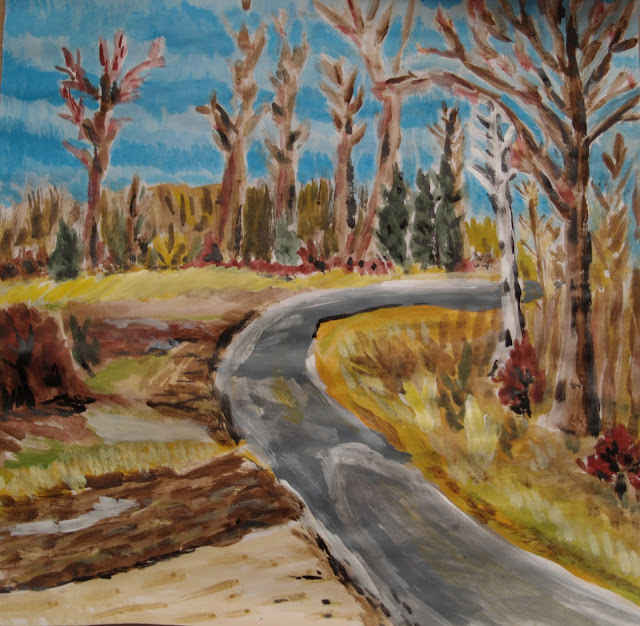 A color sketch using my acrylics as watercolors.  I was going after t he road and trees up by our bus stop.  Esme says it does look like that place.  She also said it had some of the 'same idea or same feel' as a Van Gogh painting I've had up on my computer for inspiration.  I've ironed it out after it dried and put it in my portfolio.  I might make another one from the same photograph and then compare them.
Posted by RheLynn at 1:29 PM No comments: 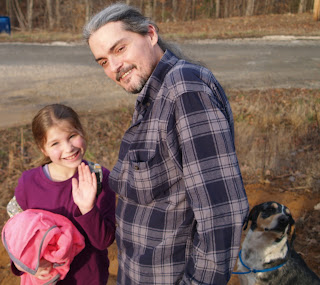 Mark and Esme (and Spud) posing at the bus stop yesterday.
Very sweet.  Mark has a great smile and Spud is doing his best to pose for the photo, too.

I had just taken these others of Mark and Spud before the bus came.
We had been up there the day before laying out paver bricks to make the school bus stop less muddy. 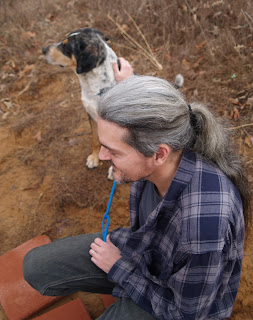 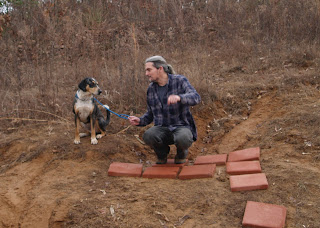 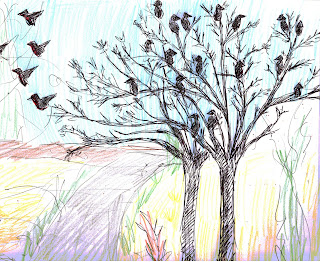 A sketch I'm working on towards a painting later.

I went to get my glasses redone today.  I thought it had only been four or five years, but it had been seven.  I took some time choosing the frames, and think I picked something I will like for more than one reason.

I also found Esme some miso soup and have read a little in a new book today.

Posted by RheLynn at 4:02 PM No comments:

Mark and I had our ten year anniversary yesterday.  We had a nice morning at home.  We both just sit and revel in the idea it has been ten years... we were both in a very bad place that day and it was made better by joining together and saying 'We're gonna do this.'  Ten years later we're all the better for going through everything we've been through together.  And Esme is nine now!  In a few more years she'll be a teenager and then things might get really 'interesting' as they say... Not sure if she'll be more like Mark was as a teen or myself... Time will be the only one to tell.

It was so windy all day yesterday.  When Esme got home from school she wanted to fly kites.  We took her dragonfly kite out and she actually got her up for a while.  I used to fly kites with my dad and have good memories of that.   She claimed she sprained her leg muscle running around.  We really need to get out and get more exercise now that it has started to get warmer again.

I am planning a painting I glimpsed while driving.  Not sure if I can really capture the idea - one of those time / math / shape ideas formed by birds and a tree and a field.  I know what caught me about it but not sure if that is going to come across in the visual work to others.  The colors and the pattern and the presence of the shapes still captures me nearly a week later, though... so this is probably something I need to pursue.
Posted by RheLynn at 5:16 AM No comments:

Esme is back at school - she said yesterday was good and she did well on her assessments before Christmas - will bring those home after they go over them in class.  I'm preparing for a week off at work - some things I need to leave notes on etc.  Mark and I have our anniversary next week and Grandma has her birthday coming up, too.

Into the third book of the Phoenix Decree.
Posted by RheLynn at 9:13 AM No comments:

Esme and her friend had their sleepover the other night - and it went fairly well.  There was a lot of screaming and betrayal over Minecraft maps.  Esme and I have been playing a Minecraft map of mine and building our own houses, cooperating and sharing.  Mark has her learning Unreal Tournament as well - and she is getting the hang of it.

Olive Spinach Mayonnaise:
About 10 green olives, handful of spinach leaves, 2 tbsp of mayonnaise, a little water and about a teaspoon of olive oil.  Mix it all up together until it blends (water) and put it back in the fridge to congeal.  This is like a salad dressing consistency and I have spread it on bread, over green beans and in a tortilla underneath some meat.

I'm reading the Phoenix Decree series, and liking it.  It reminds me a bit of 10th Kingdom with the way they are going back and forth in time and discovering family secrets etc... with daemons and other creatures chasing them and magic.  10th Kingdom didn't have cars and helicopters or English estates.

I have another vacation starting on the 8th.  It's a bit tough at work right now because our manager has his arm in a sling from a surgery and cannot use it.  I close all this week up until the vacation starts.  Esme starts back to school tomorrow.