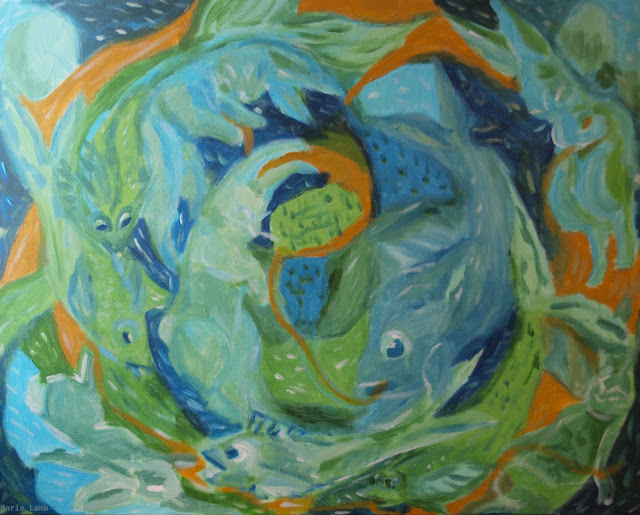 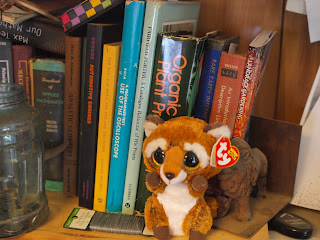 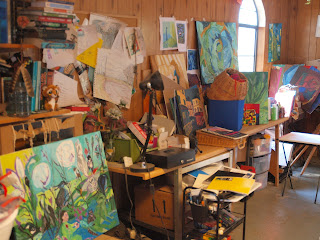 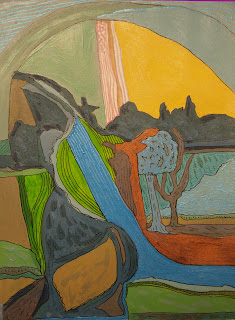 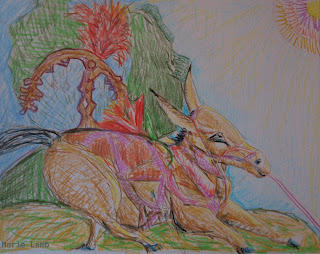 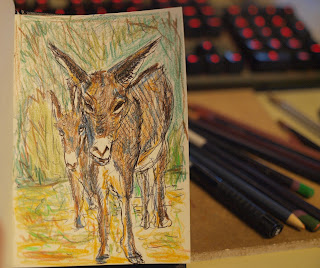 still working on languages, but I have a few other goals in mind for this year - advance my writing efforts that I had shelved for a bit, work on the math concepts I was working on before, practice art more often because I so often get stalled by a blank page or stopping in the middle of something and then not doing anything else either for a good while

did a little of : 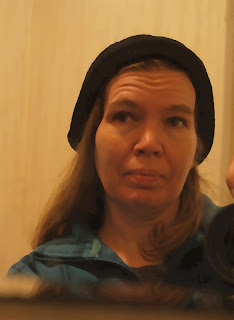 a bit of a self-portrait from a week or so ago, but really, the portrait lies in the poetry and the art, and the pressing on through the fog

and stayed for a little while

holding me in that in-between place

grabbing an icy grip upon my knees

hurting from many stairs

but now it felt good to fold them even

tucked in, soft against the blankets

the sunlight red against the inside of my eyelids

a Spanish poem filtering through my mind

of mariposa, and verdant, and a word that did not mean wings

it is the opening of the year

the music has quieted

– beautiful in the background

--||-- pinks and blue tips and the paper yellowed with time

and the light it shines

thoughts that nest vibrating as sparrows 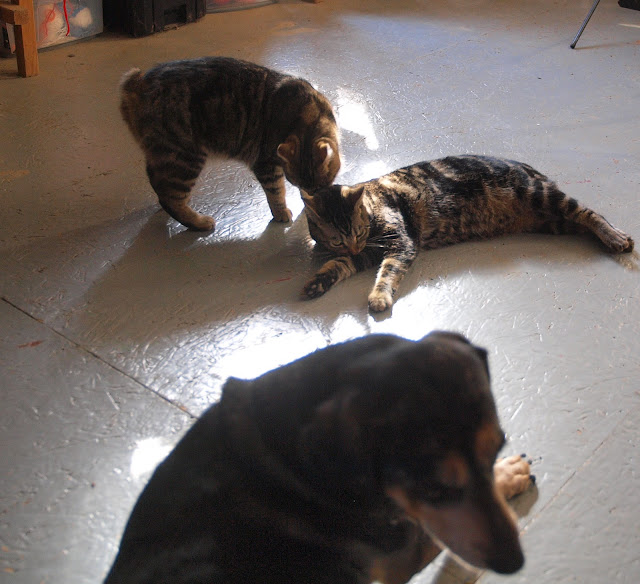 Lyffan, and Loki, and Minerva 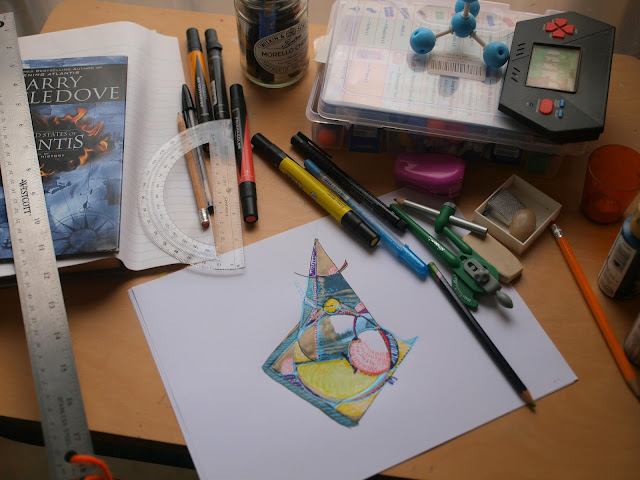 'The Man and His Flying Machine'
drawing play with compass 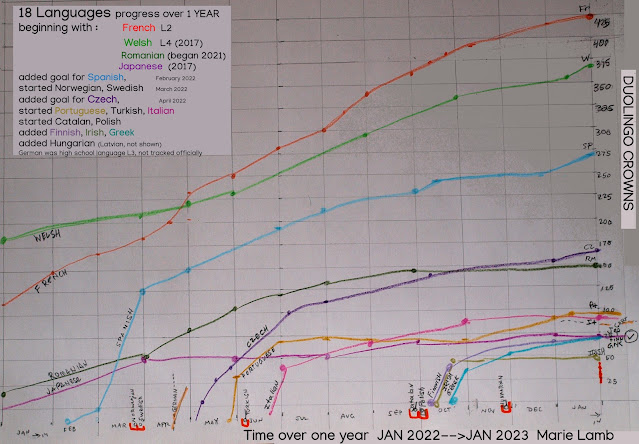 The Language Project
polyglot
This was my project from last January 14th, to this one.  I started out with only French, Welsh, some German from high school, some Japanese in the can from a year or so back and had started working with Romanian.  I wasn't sure where I was going to go - but the main goal was to explore all languages as much as I wanted, and gain some connectivity and proficiency in listening to tv and radio, and reading books and news sites.
So four languages (five if you count the German) turned into nearly twenty.  I read that article about the carpet cleaner who was a polyglot.  I knew that with my type of memory, and the fact that I've 'dumped' a lot of it into the faded-out realm from my job where I kept tens of thousands of item locations in my head (hardware store) that I was very capable of doing something similar.  I've always been 'good' but not fluent with languages.  But then, I've always shied away from them when people said I wasn't capable of becoming fluent, because I'd never use it, because I'm dyslexic.. who knows.. and I decided who cares.  I took off after whatever language looked interesting.
There was Spanish, which my daughter will take next year in school - but OH BOY was that incongruent!  More on that later.  There was Swedish, which seemed to fit my brain, but then someone said Norwegian was more useful.  And then I just segued into Czech and that fit my brain very well (but it is SO hard so many say, but I went with the fact that other people's logic doesn't always work for me, and kept going and enjoying it).
I added Portuguese and Catalan in an attempt to reach Italian - which several friends were studying.  Italian is 'ok' but I found I liked Portuguese even better than almost any of the others.  Little point - when I was in middle school I spent weeks listening to a course in Portuguese on tape from the library.  I was convinced by a friend it would never be useful, and that I didn't really know what I was doing even after weeks of checking it out... but I think some of it was still in the brain files... it was like drinking a familiar tea or soda you can't quite remember the name of to ask for it, but you know it when you taste it.  I added Hungarian, Polish, Finnish, Irish and Greek because of different people who posted in languages and also because of a Comparative Linguistics course I took.
That was fun - I took a Comparative Linguistics course on audit from the Leiden University in the Netherlands.  And I really enjoyed it.  There was a lot I knew - but then a lot I had never heard of, like Lapontic.  I was amazed at how easy the Greek alphabet came to me - the Japanese is still 'in there' from years ago, as well, it's just like remembering how to divide fractions.
The Spanish is still hard but in the 'middle' lessons it was so much harder than ANY other language.  It's supposed to be an 'easier language' to learn?  Not for me.  It was like it was sorting into the holes the French was in and the French was pushing it out and there was no where for it to 'stick' except clinging to the French.  As I learned the Portuguese and Catalan, it seemed to come through those a lot better.  The Catalan course was IN Spanish, so I had to answer and type in Spanish to translate the Catalan.  That made my brain smoke!  And then the middle-level Spanish finally started to repeat sentences and concepts (like past tense) that the Portuguese had covered very early.. and it was like the glue was finally there.  I began to understand and pick up Spanish in many places where I saw it online, and understand it when I heard it without looking at the screen.
So now I'm headed into 2023 without such lofty goals (although, I'm proud to have achieved level 25 on DuoLingo in French) and the Spanish has opened up a little.  I'm working on reading more books, including Spanish poetry and my Czech novel, and a few German things as well.  I've added a few other languages - Latvian and trying the very beginning of Russian and Ukranian which seems to sort next to the Czech and Polish nicely.
the results:
((fairly fluent, second language, third and fourth))
French - level 25 radio, some tv and books/news
German - level 12 but not 'trying', just using it as filler space, reading books
Welsh - level 23 (second time around)  tv, radio and books/news
((some fluency)
Spanish - level 21 - reading books but with a dictionary
Czech - level 18  - reading books but with a dictionary
((Still learning))
Japanese - level 13  - recognizing words and grammar, remembering symbols
Portuguese - level 14 - reading recipe websites
Italian - level 14 - not sure, but it's not hard either
Greek - level 14 - very interested in continuing
Catalan - level 9 - very interested
((stagnant))
Romanian - level 16
Finnish - level 13
Norwegian - level 10
Swedish - level 10
Irish - level 9
Polish - level 9
Hungarian - level 8
Latvian - playing on children's game sites, reading news (badly), watching kids shows (lost but enjoying it) 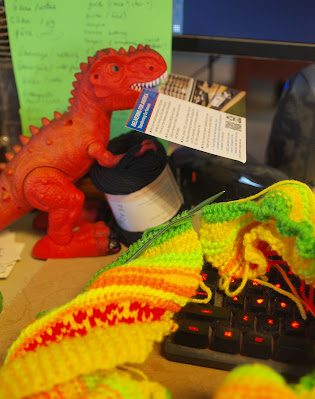 Posted by RheLynn at 2:56 PM No comments: