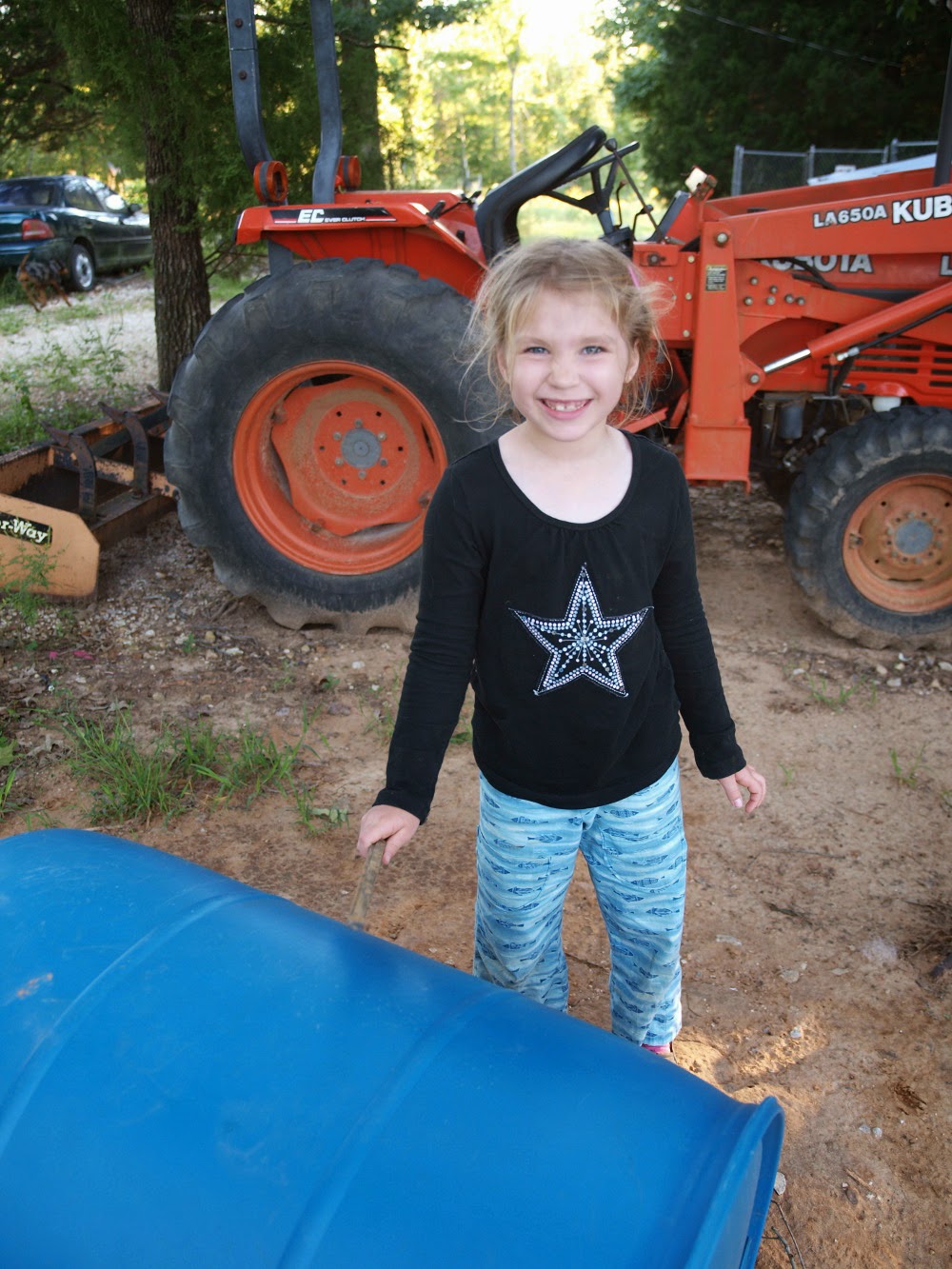 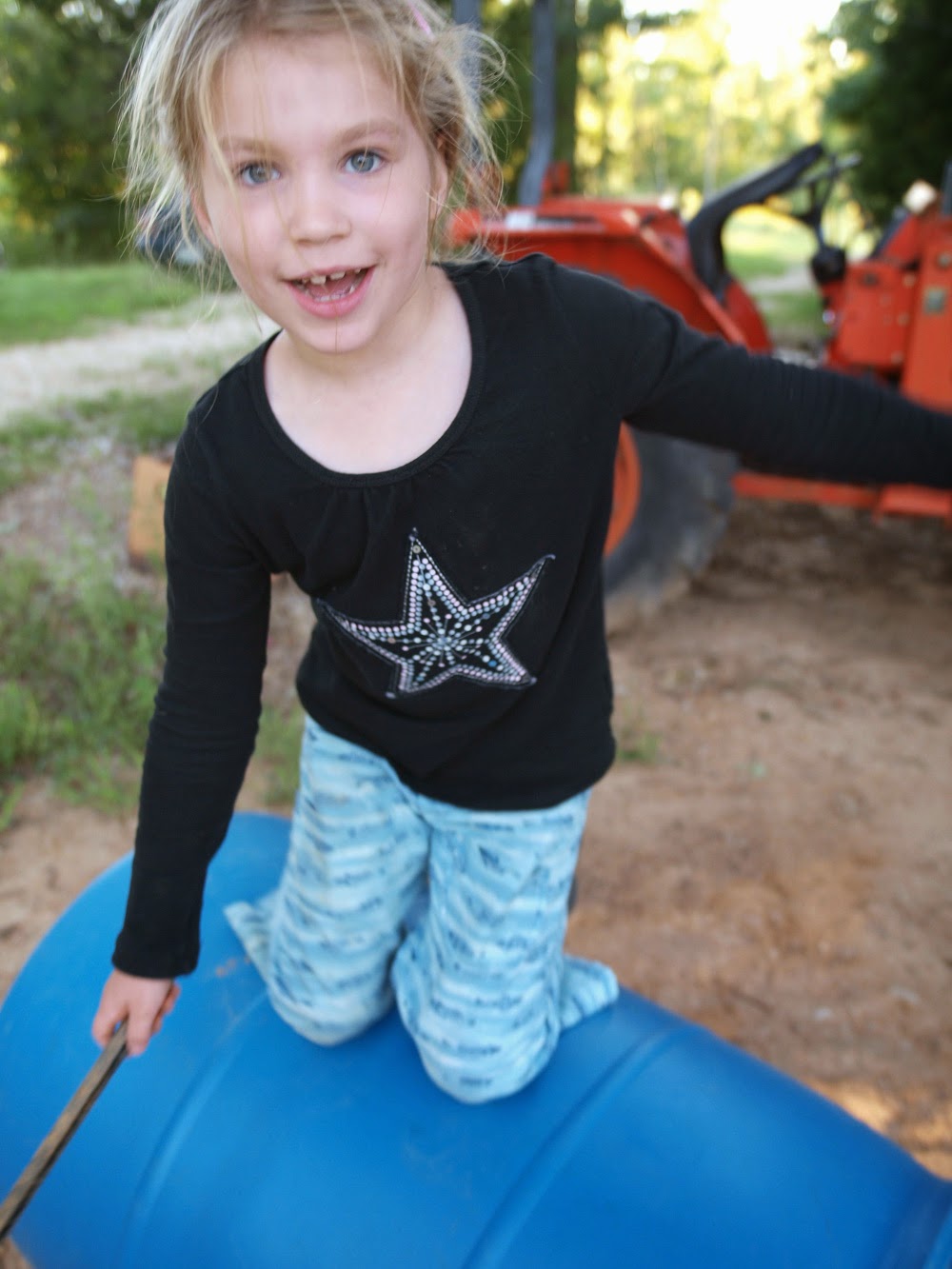 This has been a long week - and it's only in the middle of it.
Esme has a sleepover at a friend's this weekend... and there were things to get ready there, arrangements etc...she had to have a sleeping bag, we had to make a plan for the timing with my work etc etc...

And I barely get to see her this week because of work.. and she has been on 'bad behavior' report at school although it is mostly for talking while the teacher is.  This is a disconnect for me - it is first grade, and what do they expect them to do?  I am still just glad to have her talking  - and sounding more and more complete and grownup all of the time. In fact, I've come to the thought that maybe we are just sending her to public school for the talking to other kids- the very thing they are saying she is in trouble for every day - and everything else she is actually challenged on is happening at home.  Their idea of reading and math consists of things she has known since she was three.  There are a few challenges in English and spelling... she needs to write more, and learn noun/verb/adjective.. and her comprehension/memory skills need challenging.  I really can't truly homeschool with my schedule.. and she couldn't learn about other children and social day-to-day at home.. so, here we are.

She is 'ready' for much more than what they are giving her in school...which is addition practice up to ten.  I complained some and she got longer reading assignments, they were painfully short and were asking us to repeat them three times over if she finished them early... I know complaining is going to be bad for her in the long run.. I feel it, actually, not know... but it is so tough when she is, for them, nowhere near their 'norm'.. but for us, she is right where we expect her to be.  Mark and I have discussed where we would like to take her with reading... doing lots of library books, leading up to starting some longer books like Mark Twain.  I want to get her another Franny book or another Magic Treehouse at the library next time.. she is going through level 2 readers now in a fair time, ten to fifteen minutes.  We have studied South America some, kicked off by some National Geographic kids stuff and wanting to find something that isn't in and/or out of step with their curriculum to spark her interests.

I paged through her Kindergarten math book that was on our table for something to occupy while I brushed her hair this morning.  Nothing of use... so we started talking about equations a little, worked out several and she wrote one for me (2x)3+100+10x=___ if x= 10.  She writes 'the hard ones' for me and I wondered when and where she would ever stop *ha* writing it so I could answer.   I had to remind her about the parentheses between the 2x and 3, and that is going to take some explanation because she has forgotten what we worked on months ago there.. she knew what I meant and put them in where I asked...which was good.  The next time I have more than ten minutes with her for it we'll go over that and order of operations.. if I feel her multiplication has reached a good enough level to rely on it.  I've only taken her up through fives by fives really...

I need to be doing more in my workshop.  But, there is just not enough of me.  Some days I want to scoop it all up and clear it away.. others I know that eventually I will get back to it and do something good there.  Work days have been long and boring at times... inventory coming up and lots of little tiny tasks and digging in dusty areas - with my allergies going off right and left.  I'd love to just stop sneezing for a day.

Working towards the weekend.. and the days and nights are already feeling like Fall.
Someday soon I'll probably be knitting again... then we'll know it is fall.

///finished the entire Harry Potter series.
//read an English history novel 'The White Princess' by Philippa Gregory
//have ordered the first book in the witches series by Deborah Hawkness, since the library had all but that one - try it out and see if I can get into it.  Fiction is so hard for me to find something I like and can commit to, and my brain is too skipabout lately to work on anything deep...
Posted by RheLynn at 5:30 AM No comments:

Extremely wet hair but all smiles as she tries on her new dress - it is like a princess :)  Daddy said it was like a Swedish dancing dress, mostly because of all the ruffles and the bow in the back.  I took in a lot of room at the neck zipper to make it fit better (because of the issue I spoke of earlier with the pattern and my inattention to the zipper/button area), and that actually worked out nicely with extra pleats and ruffles in the skirt.  The tie back strips make a pretty bow and that draws it in just a bit more. 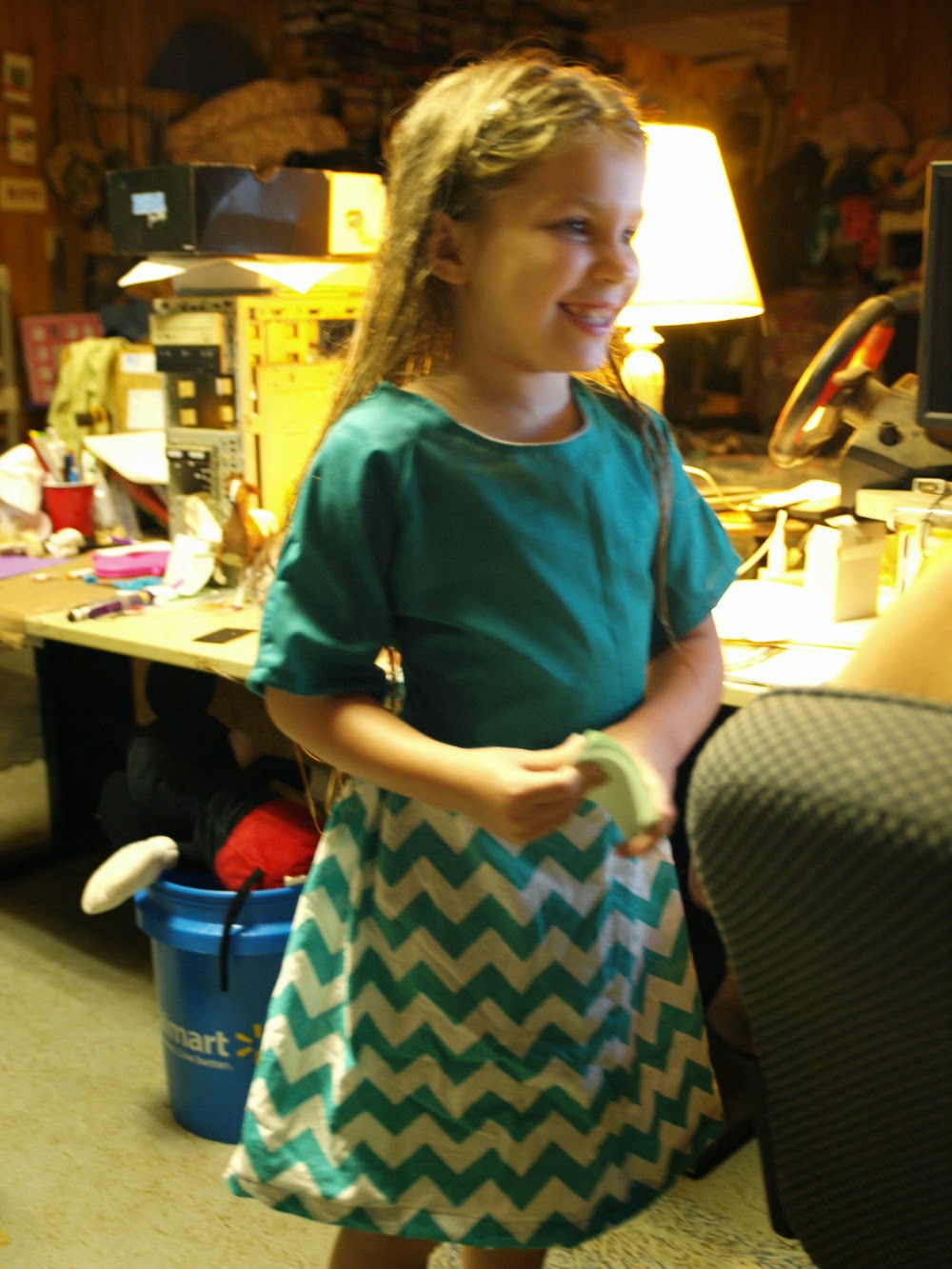 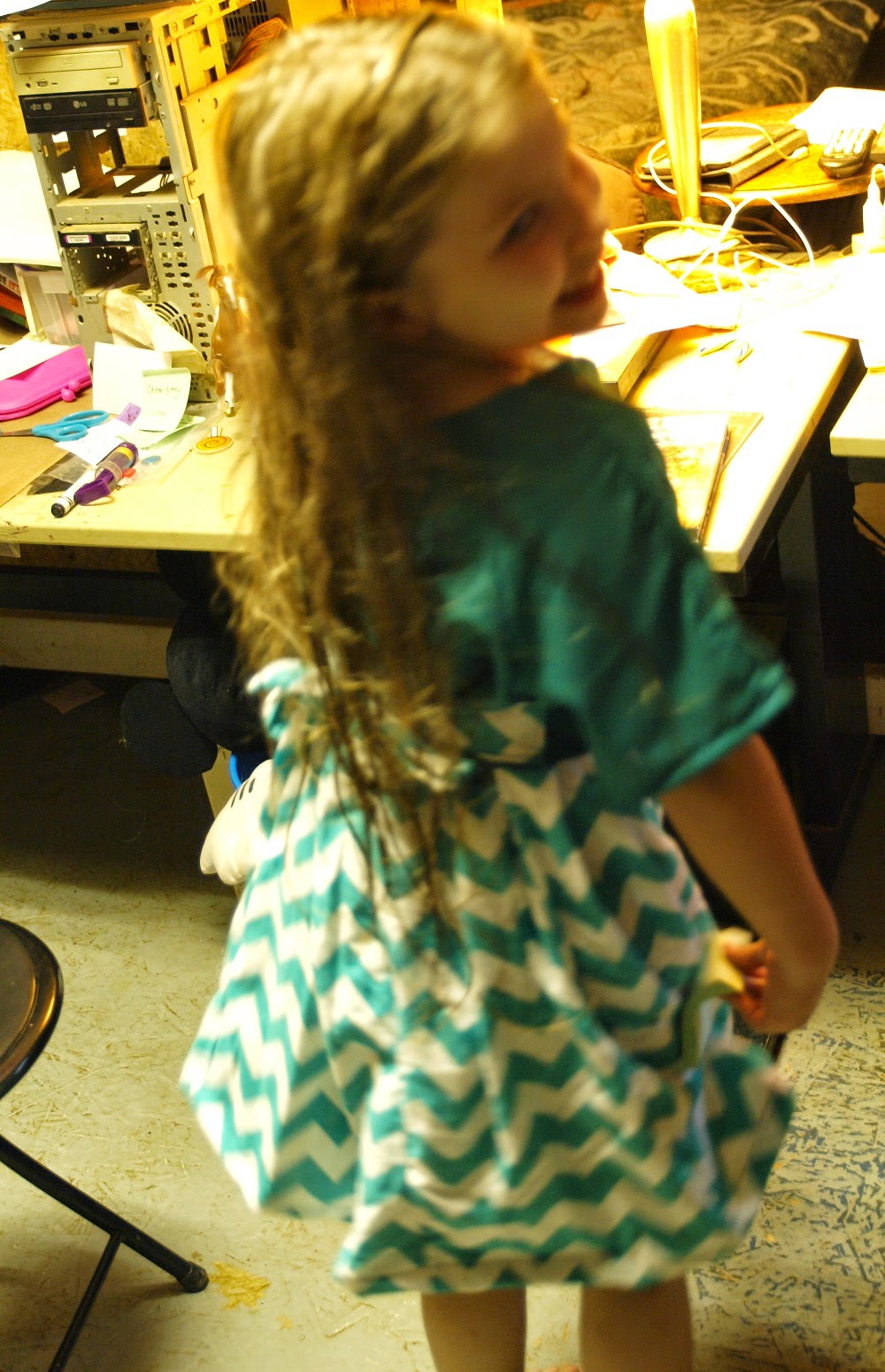 Not the best picture for the back - but she was twirling so much it was hard to catch one at all ;)
Posted by RheLynn at 5:53 PM No comments:

A box and markers makes a fun filled afternoon

Every once in a while I bring home a box from work - because it says it can be something more.  This one was a portal, a car and a puppet-box (last picture) slash TV station box. 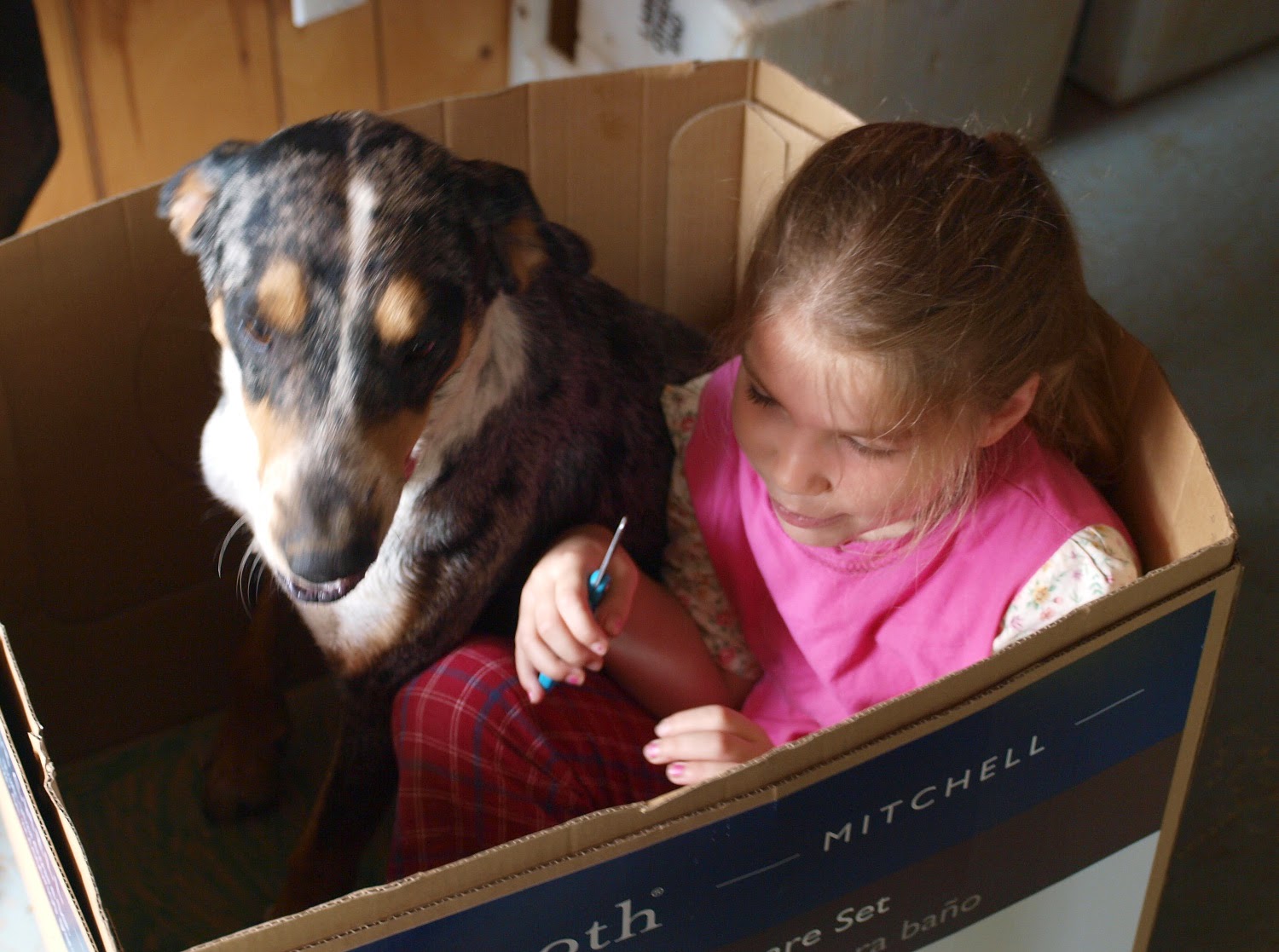 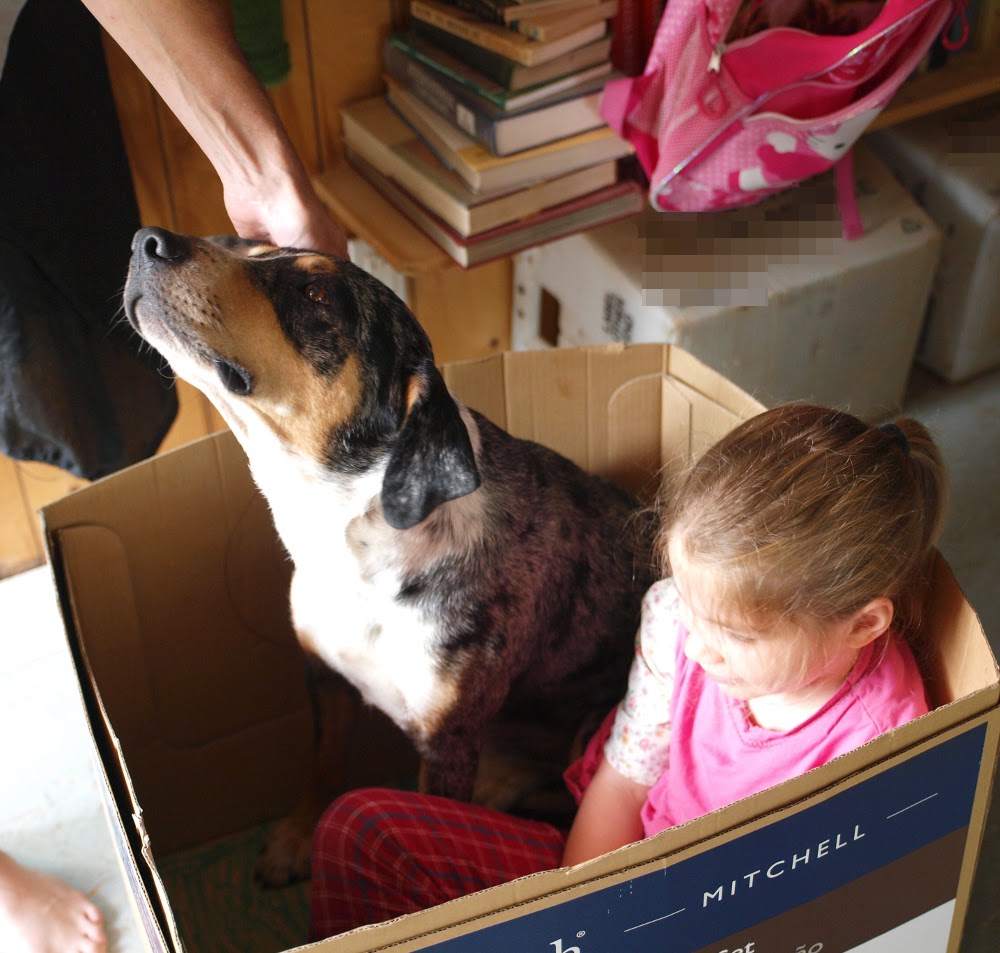 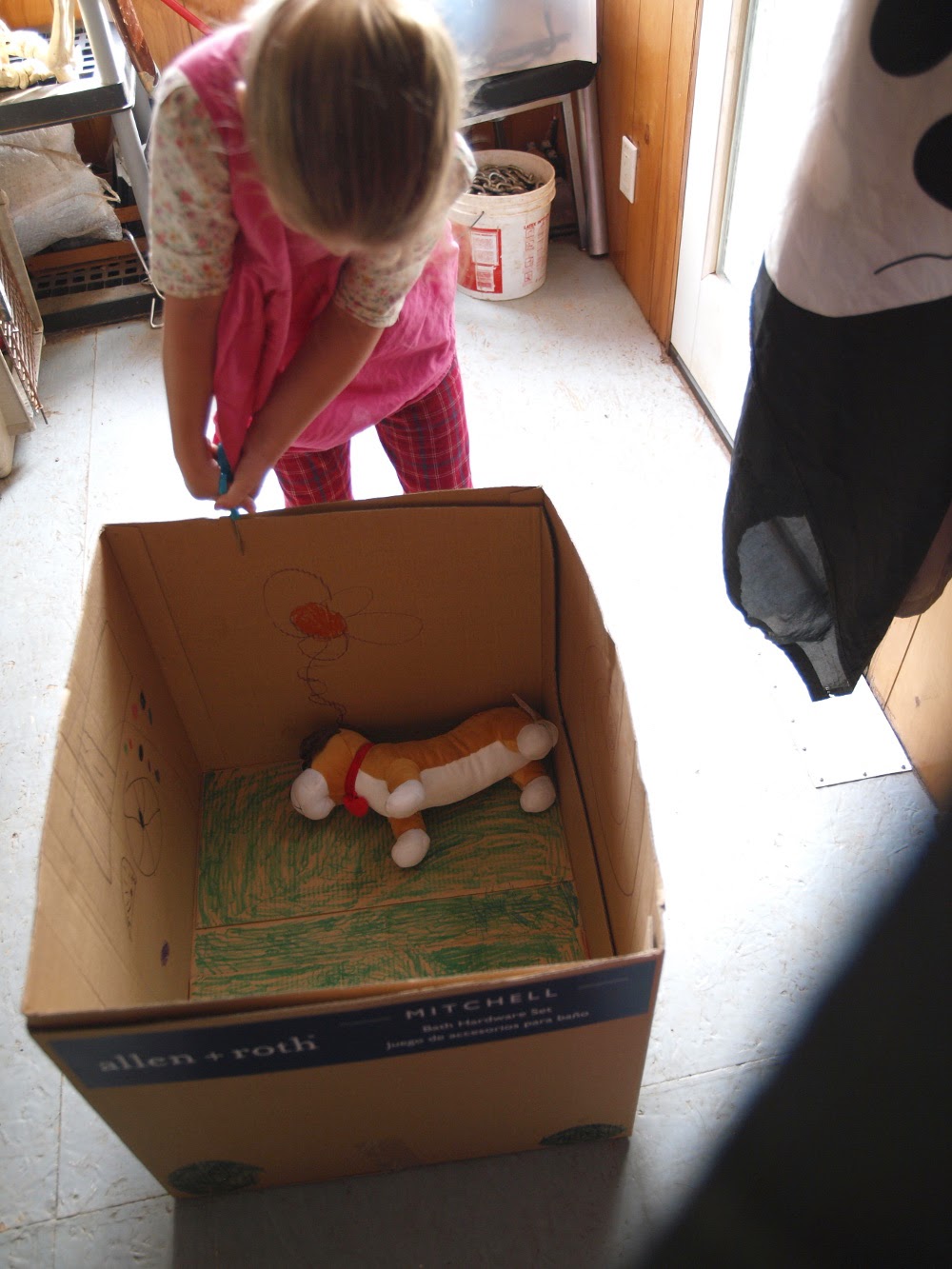 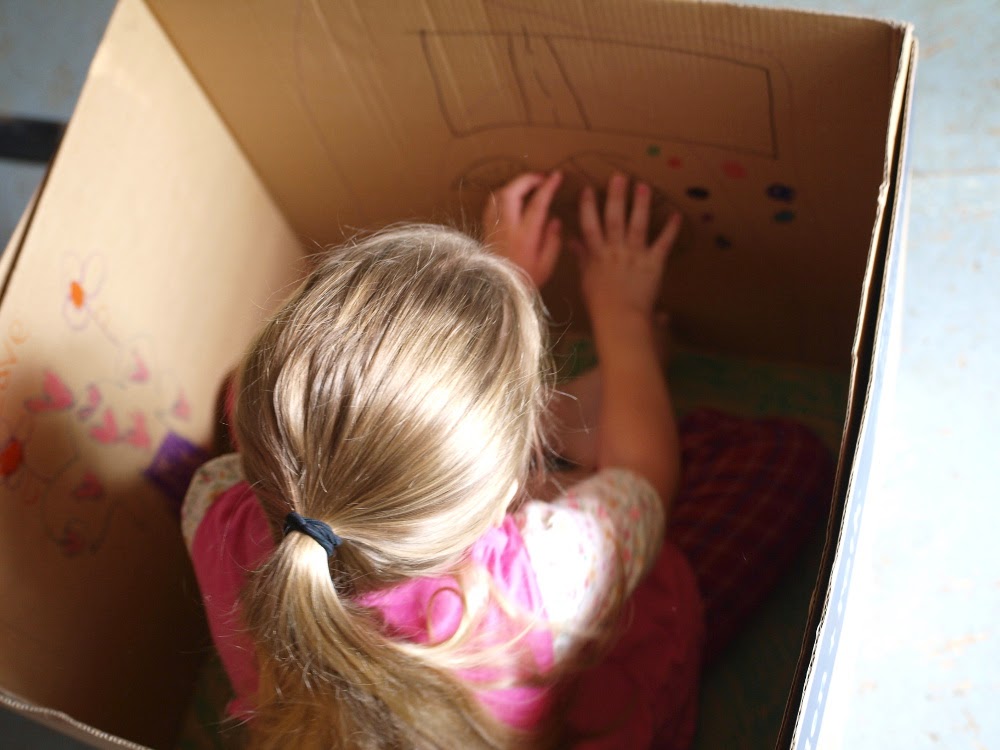 She took her markers to it and made a window and controls.
She said she was driving to Florida, with Spud, the dog. 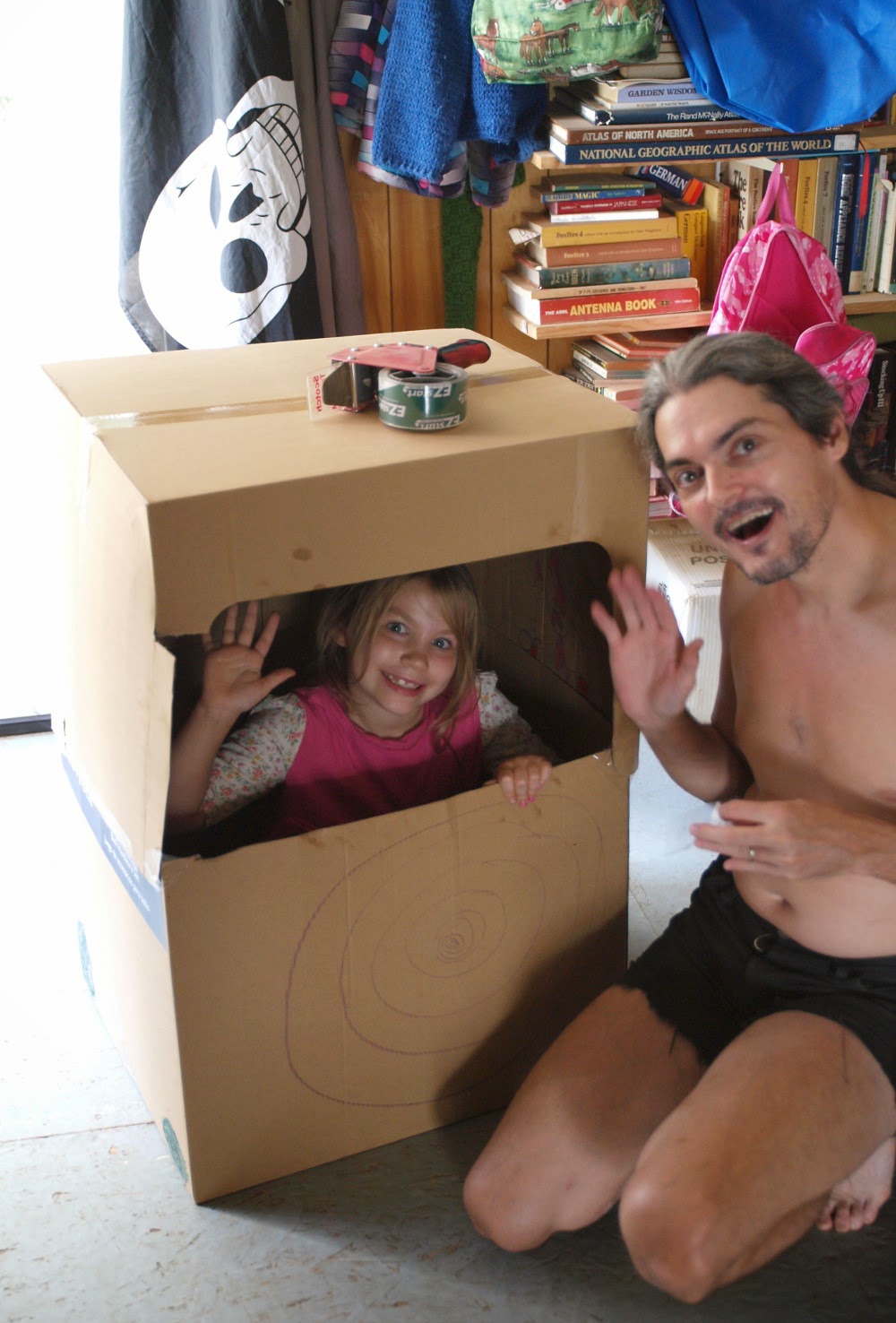 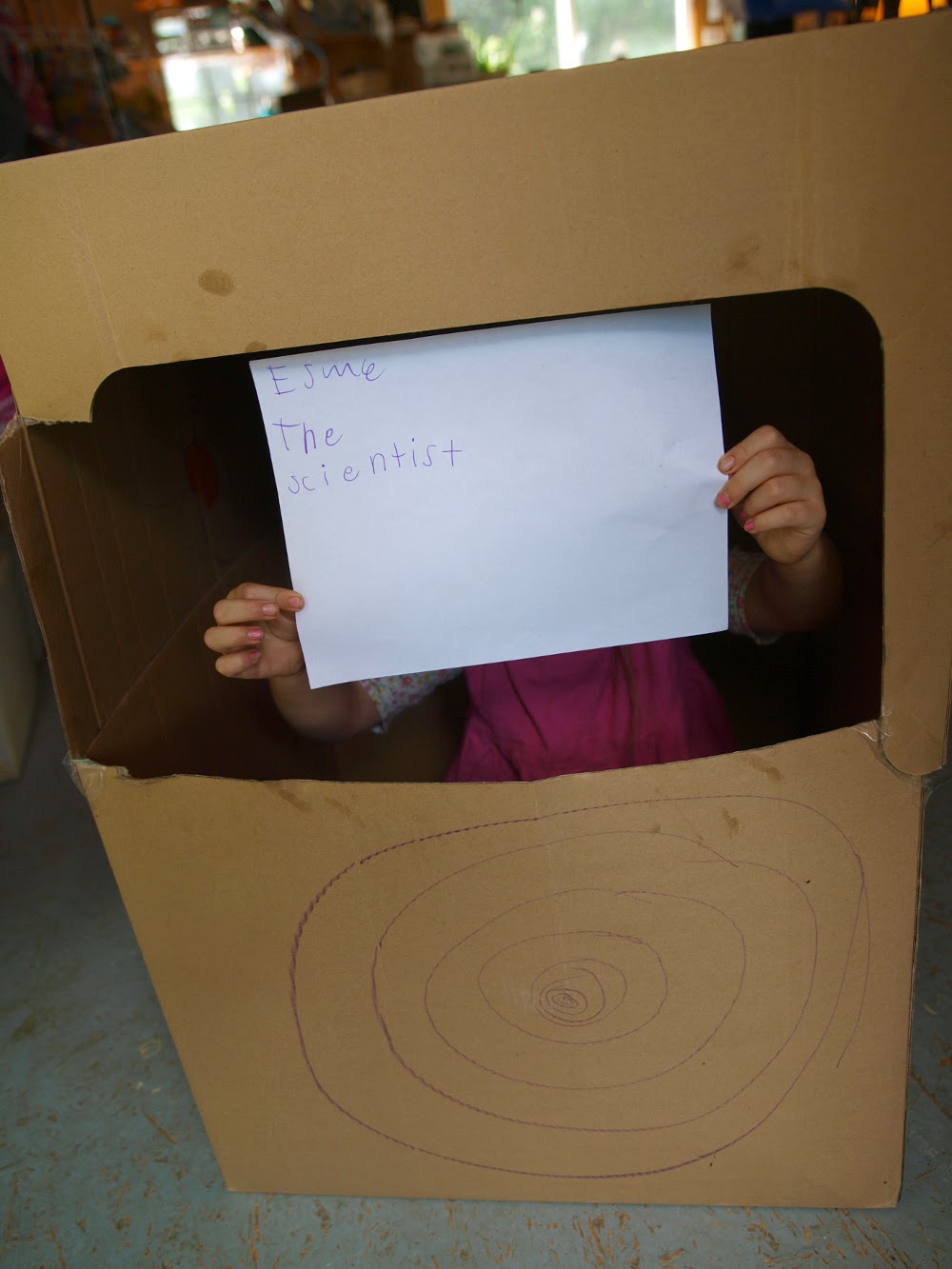 Esme the Scientist show - which shows you how to build Lego toys. 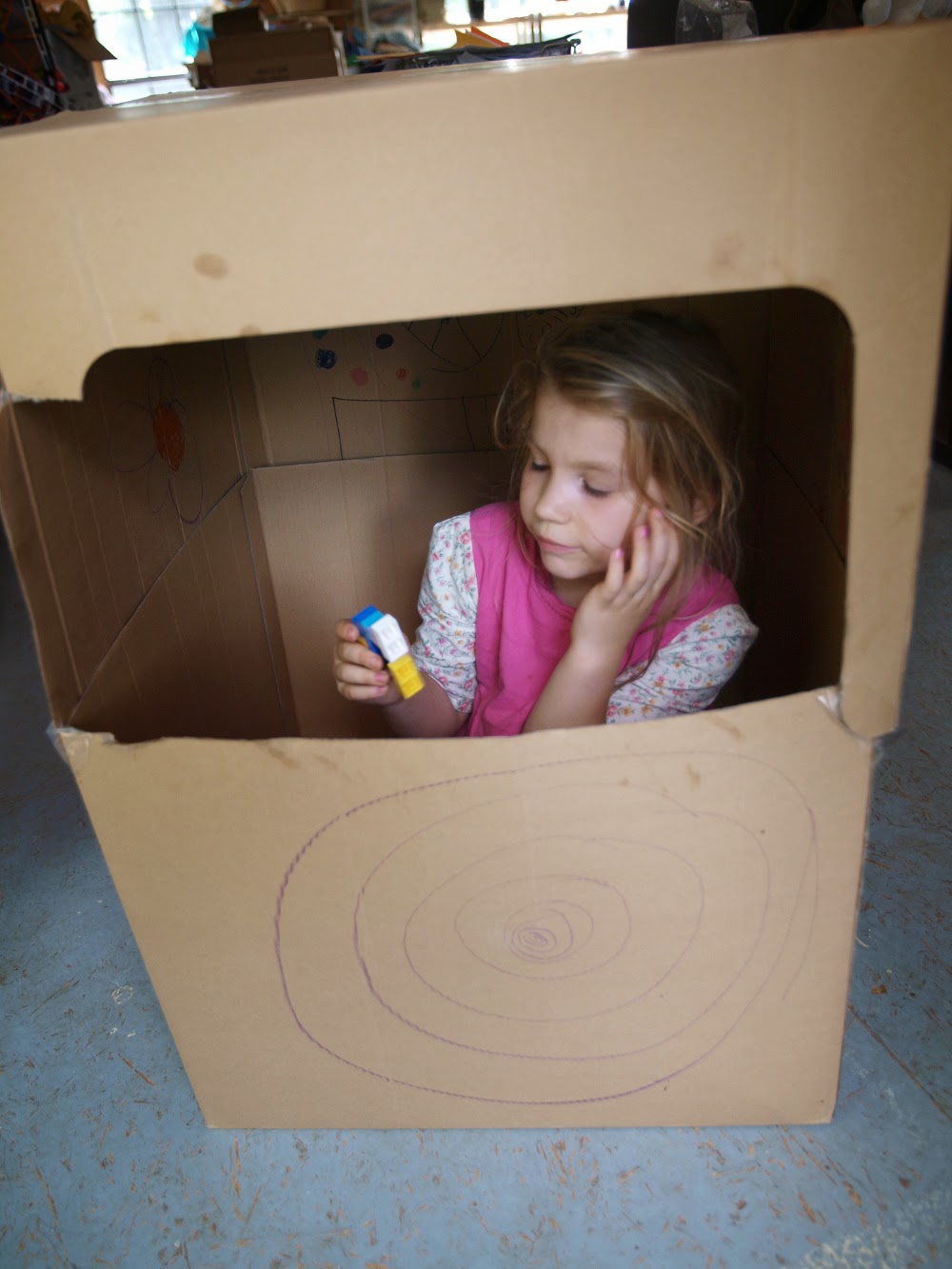 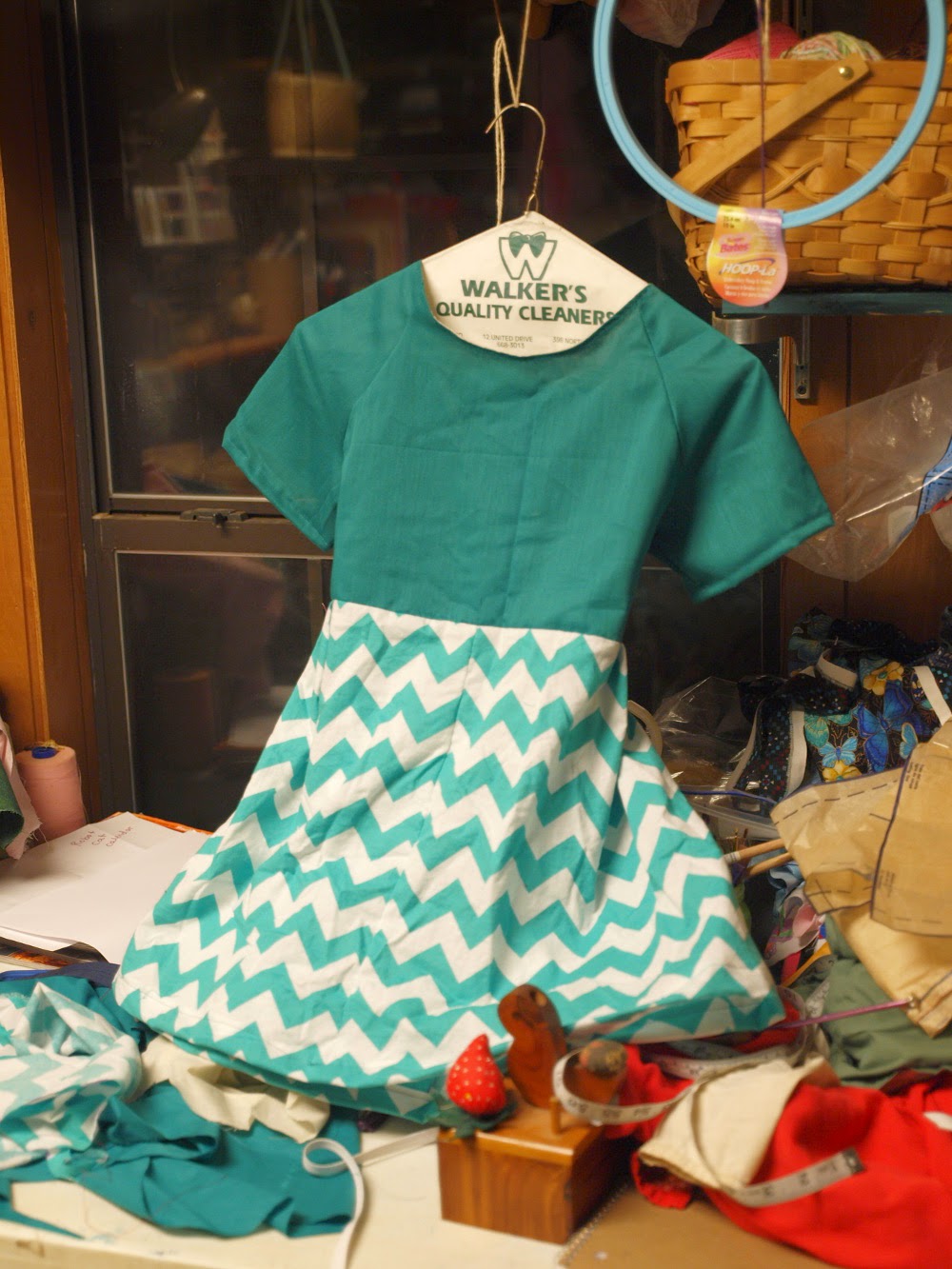 Posted by RheLynn at 6:57 PM No comments: