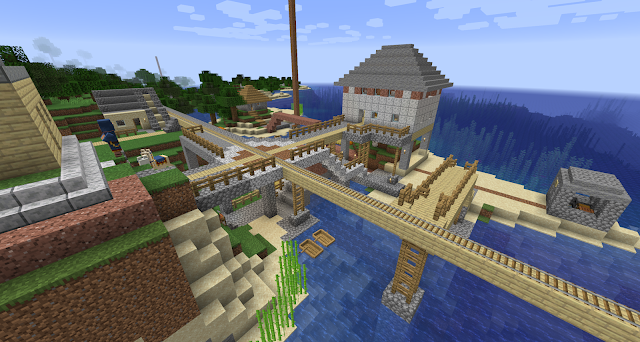 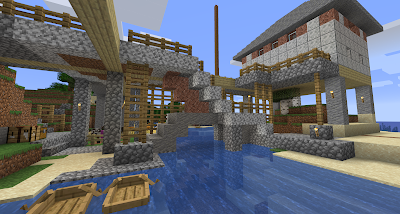 A little railway and dock station I have been working on this morning, since my new Screenshot won't load, this is in vanilla 16.5 and mostly survival (I admit I popped into creative because I was sick of running out of fence).

It's Mother['s Day, and I am off of both jobs, which is good.  I bought us a cheesecake last week and it has lasted through today.  I bought Mark's mom a plant and brought it to her yesterday.  It has been rainy and stormy all week - including this morning, with a huge wind coming up at seven am.. it is as dim as twilight out there still and it is 1 pm.

Might move down the shoreline a little on this one, already took a trip across the ocean and it was more of the same landscape.. and the birch and oak trees seem to travel on forever... except, there is a mushroom Island.  That's interesting, but not material wise, for me.  I'd like to find a village or a mineshaft to get more crop varieties and make bigger gardens and stops along the railway for agriculture. 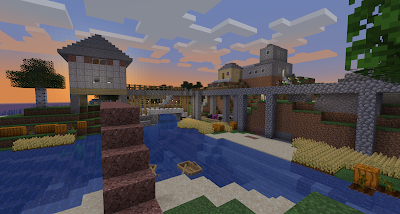 I've been knitting a lot of things, toys, a big shawl scarf, mittens, and today a hat.  I've been working on some new charts and some new patterns. 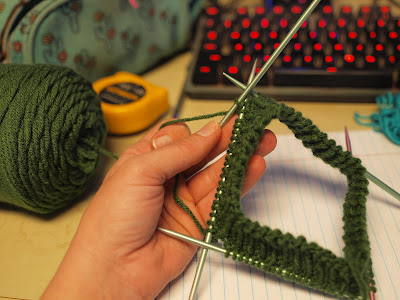 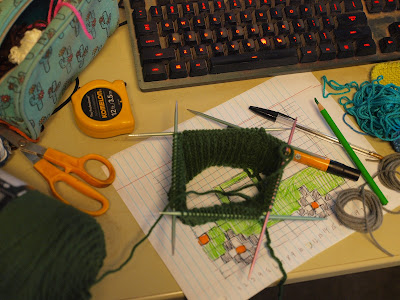 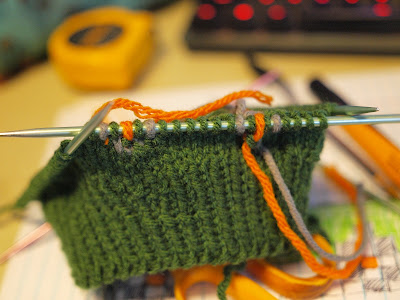 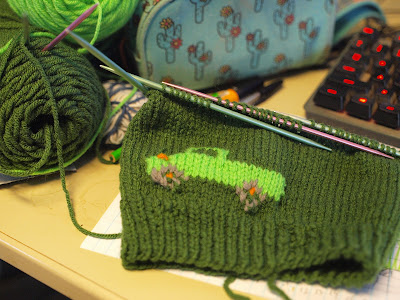 I started out with the same general pattern as my basketweave hat so long ago (2005?) and then just changed it entirely after the rib with a hand drawn knitting chart of a truck.

Posted by RheLynn at 5:35 PM No comments: 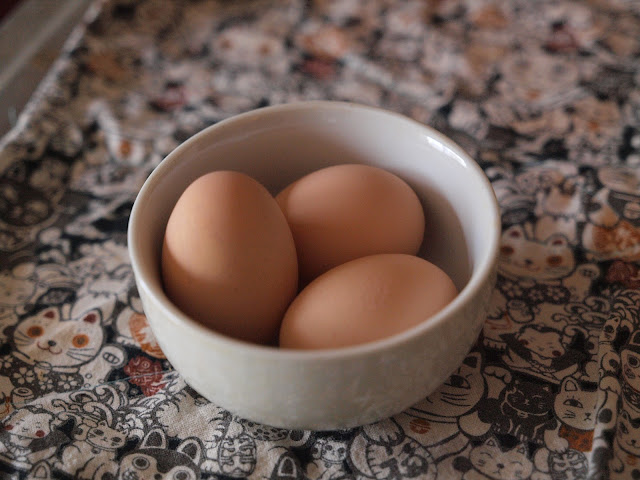 Well, it is January, that time of the year gardeners the world over start looking at their seed stores and starting things in little pots in hopes that they will grow into big strong transplants.

The chickens had their first eggs in about a month.. it has been that cold.

I checked on the front bed with the carrots and parsnips planted last September.  The parsnips (Hamburg rooted parsley) are about a pencil's width but still have green tops.  The carrots are a bit larger than that - nearing on index-finger size, but they are supposed to be short Oxheart version.  Both of the seeds were sourced through Victory Seeds.  Mark has said I should dig out that entire bed soon and put greens in for the year, as it keeps warmth and moisture from the brick wall behind it.  I had forgotten there were a few vines of Jackson Wonder Lima Bean in there, as well - and pulled those out just now.  There were about six dry good seeds there and about six that had started to germinate, and the rest were a loss.  So - the germinating seeds are in a pot indoors here.

The picture below is a pod of Shackamaxon bean that was the same story.  That was about a week ago when I cleared vines out of the main garden, and they are now starting to grow.  One has a taproot four inches long - and they will need to be repotted as soon as the second gets above the soil.

So now I'm growing heirloom landrace 'rescue' beans... I'm kidding, really.  But we have been keeping the same varieties alive for years with my hobby.  I studied the articles of Joseph Lofthouse with his 'landrace' seeds that changed to adapt to his location in the mountains of Utah.  We have been growing the children's children type seeds of our plants for long enough that these really are 'pea ridge adapted' for Tennessee.  These Shackamaxon were from northern New York and are the survivors of several plantings, some which did better than others - over the years here.  The ones that we planted in July seemed to always do the best and be the most prolific, but not until they were at least two month old vines or more.

There is such limited space and such limited time as well.  What to grow out this year?  Last year I didn't have time for much, but still got some Shackamaxon and a good crop of Whipporwill peas out of it.  I think using the main bed to grow lots and lots of kale and mustard was very useful for cooking - although I did not save any seeds off of them.  I had planned to look for seeds from the arugula/rocket and it was attacked by some sort of fungus halfway through.  I have more seed for that this year and did enjoy eating it.  Our purslane came back up from self-seed but then the weather never did get great for it, and it died back without making much of itself.  The lemon balm, however, went EVERYWHERE as did the lemon-scented basil.  I collected heads off of the basil and the perennial lettuce and will see if any of that is good seed. 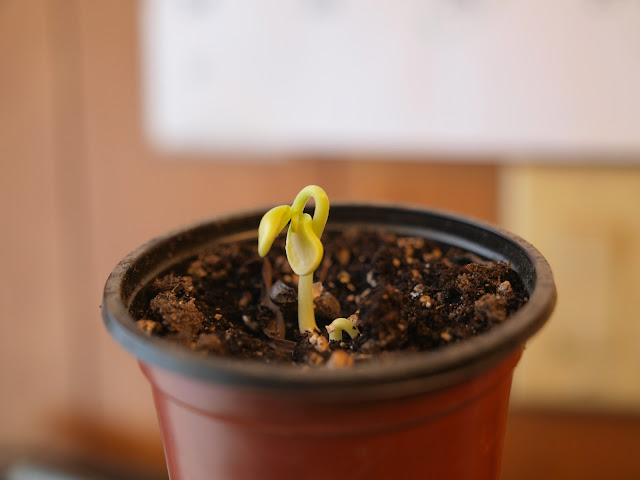 The 'rescue' beans, sprouted after a week

There is another pot that was started today, will check back on them in another week

I saw a lady

walking with her Manx cat

I wasn't sure who was walking who

as they nearly danced

the cat weaving in and out between

she placed each foot down carefully

as if to some melody I could not hear

as she talked on a cell phone

the stretch of rural road

as they have done

it was obvious to me

so many times before

they were rhythm intertwined

the cat would have had its tail up

if it had one

the love was obvious

the day was ordinary

and still - when I reach that little stretch

of road with the wide fields, bare trees and grasses

I think of them

dancing - in their little slice of world

that for that moment

Posted by RheLynn at 7:03 AM No comments: 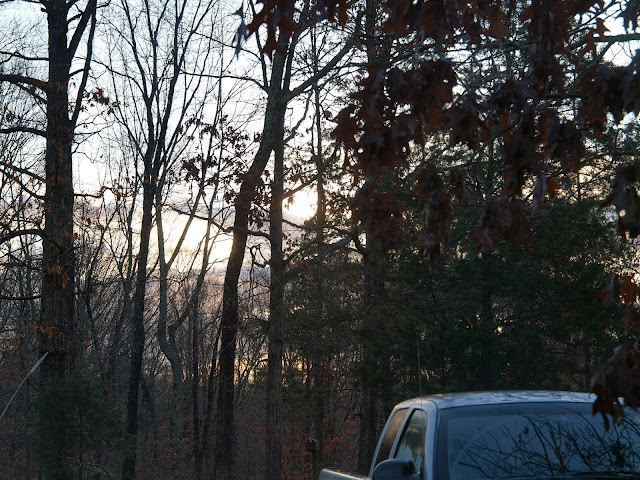 Even when the others do not see

the mathematics in the bend of the grass

feel the soft spray of seeds brushing your cheek

the golden light filtering down

the deepest red in the leaves

still clinging to the branches

see what has been laid out

for it is given

and even the hard rocks under

the soft soles of your shoes

see the mathematics in the light

even when the others do not hear

messages are still being spoken

to the ones who listen to sunlight and see wind 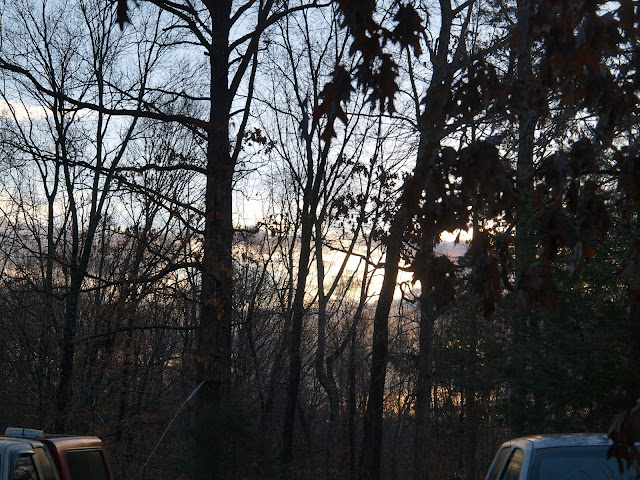 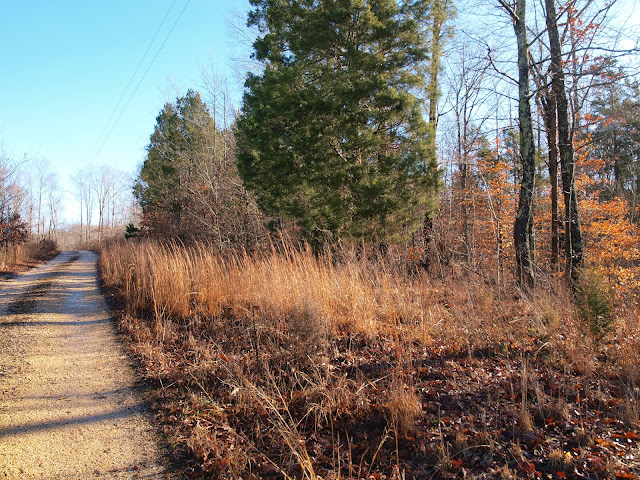 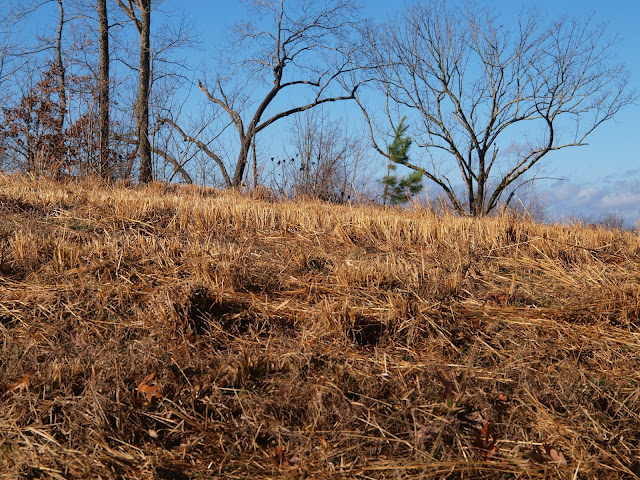 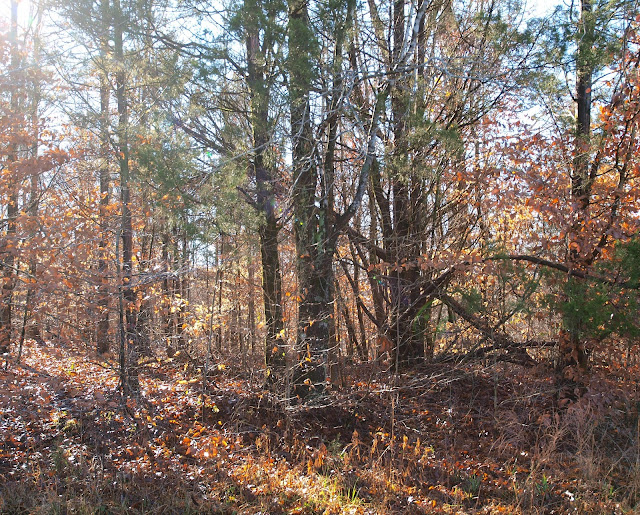 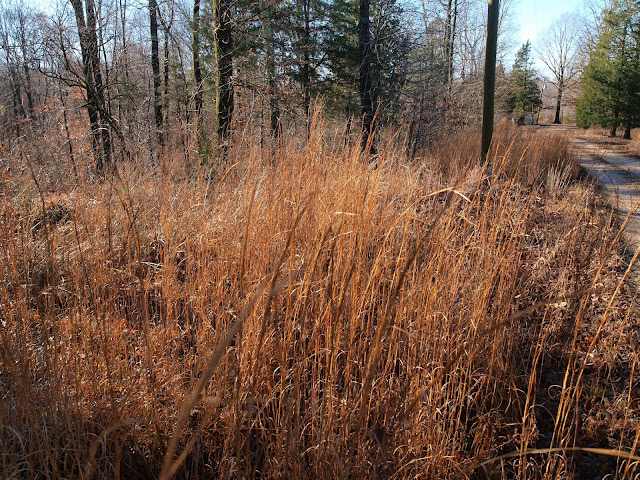 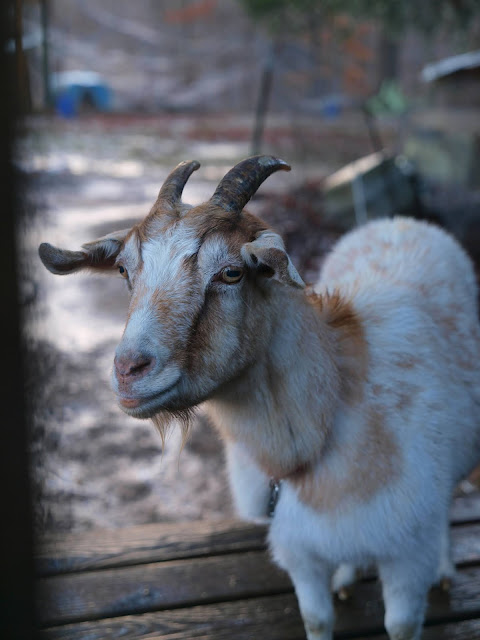 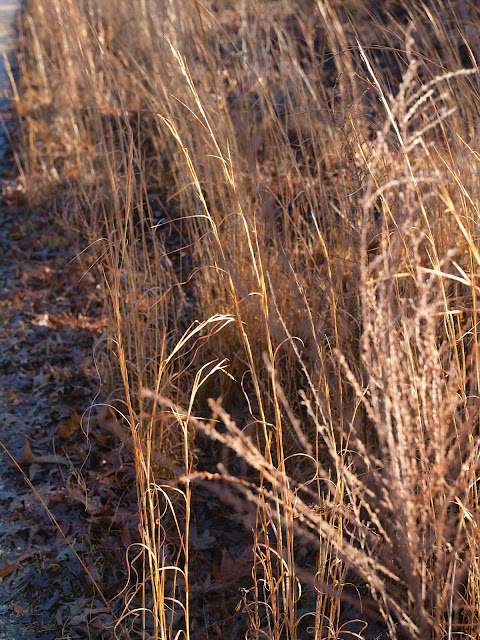 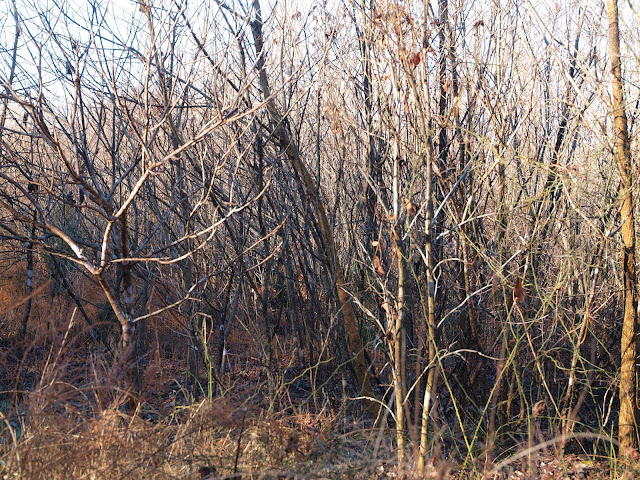 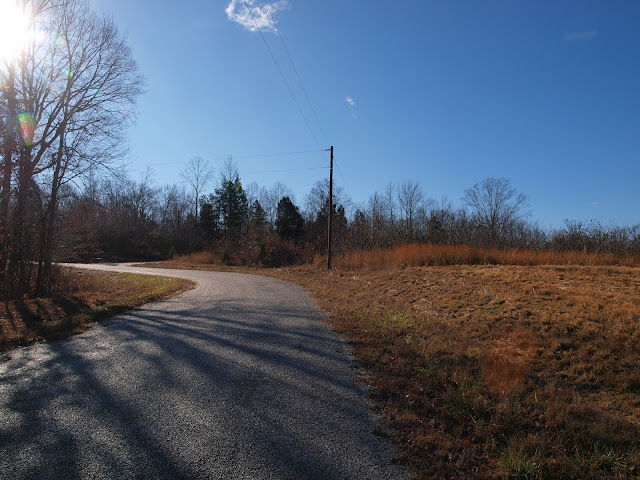 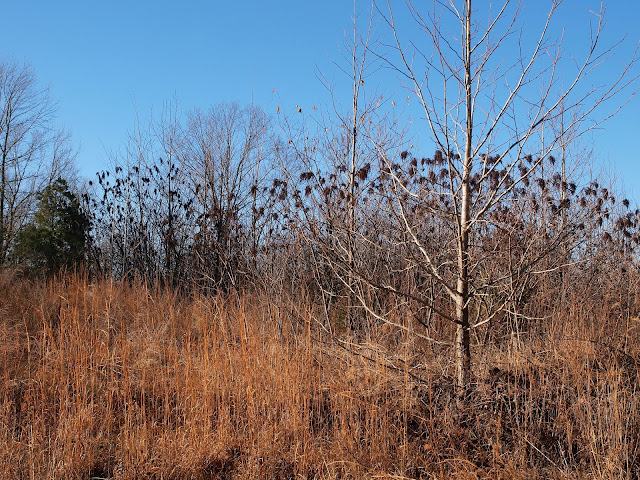 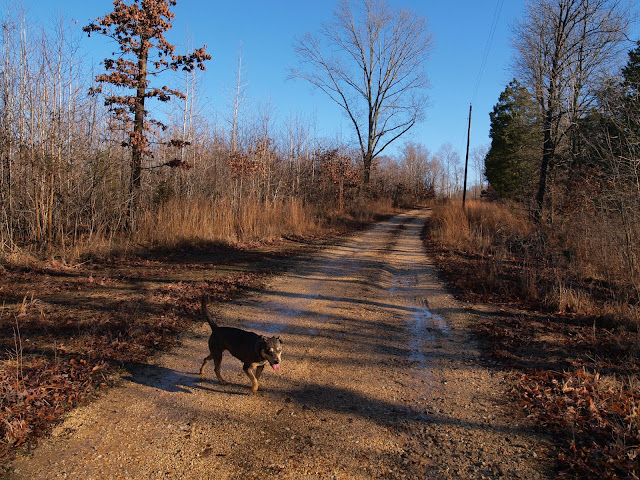 Posted by RheLynn at 1:59 PM No comments:

Some bits inprogress of Clifton village 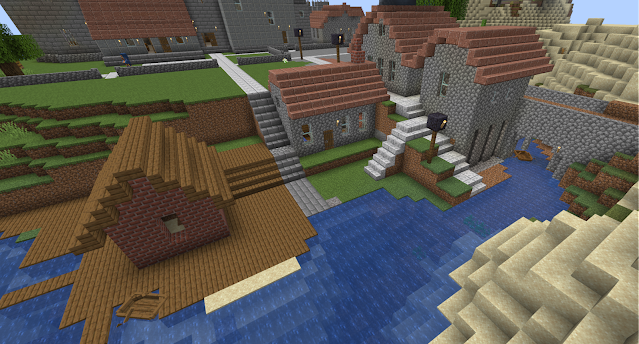 Bits of village behind Clifton Castle, docks and bridges 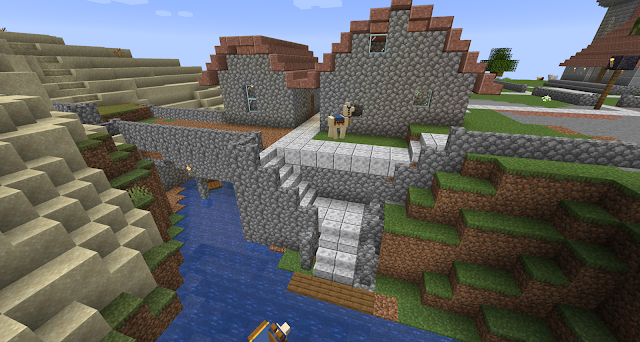 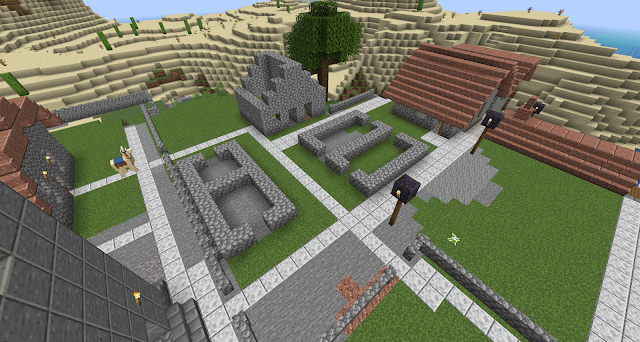 setting up foundations for smaller apartments and shops

every little building will have some sort of sign and info about what is used for, chairs, desks, beds or work equipment inside 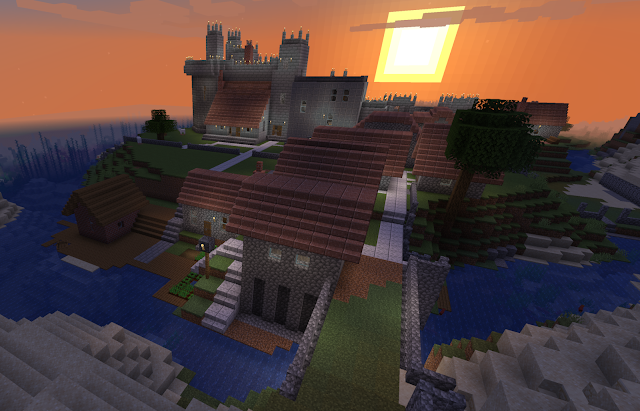 I didn't get a lot done, but at least these buildings were finished... some views of it in the sunrise and from above during the day 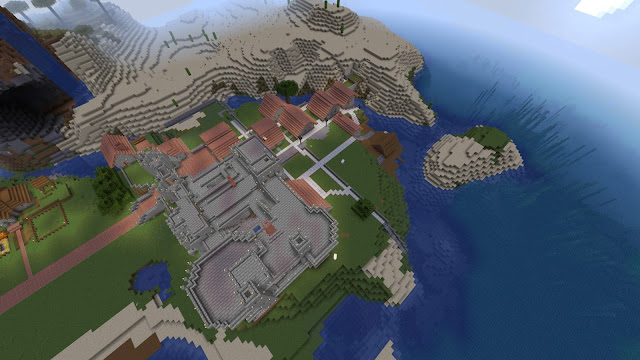