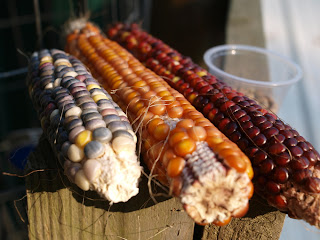 After reading the corn chapter I did a few 'field tests' on the corn seed from last year.  The first test was extremely low-tech.  I found a flat rock with a depression in it and a sharp rock and hit the kernels of corn until they cracked in half.  Then I examined the inner makeup of the kernel to see how much flour and how much 'flint' it had in it.  The flour parts are powdery bright white and the 'flint' areas are clear and glassy.

The blue/white/yellow cob was interesting.  The blue and purplish kernels in it were mostly flour based and I could almost pick off the outer coating with my fingernail itself, while the yellow and white kernels in it had a hard glass-like outer coating that went much deeper and very little flour around the middle.  And these had all been part of the same single cob.

The 'butterscotch/rose pink' cob had mostly glassy kernels with very little flour.  These were the hardest to crack open. It would be called a flint corn.

The reddish/striped variety cob was right down the middle.  It was easier to open than the butterscotch and had some flint and some flour.  It would be called a dent corn.

The second 'field test' I did was trying to parch some of the easy pop corn.  It did not go well.  I used too much oil and really didn't get the concept.  Plus, the pericarp (outer coating) of the corn was too hard I think.  I did not get any 'parched' corn.  They do have specific varieties that are 'best' for parching - but most of them seem sold out by this time in the season.

The third 'field test' was just trying to pop a bit of the b/w/y corn and the easy pop in the microwave popper and see what happened.  Both popped about half of the kernels in 45 seconds.  The resulting popcorn had a VERY hard hull center with soft white popcorn around the outside.  Keep in mind I don't really 'like' popcorn - it gets stuck in my teeth, which was why parched corn sounded like a good idea.  However, the b/w/y popped material had a salty 'limey' feel to the inside of it that was good.  The easy pop corn was like very dry fake popcorn and not worth the trouble.  The flinty yellow/white kernels of the b/w/y popped easier than the floury blue/purple kernels but the floury kernels tasted better.

And now the drumroll - the west field is planted with : b/w/y corn kernels  It will be interesting to see what comes of it this generation around, and what the 'sweet' cobs might taste like if I pull them a bit early to try before the rest dries in the field.  Mark makes a good point that chickens will not care about these qualities of corn - but well... it is nice to know more about it than I did before.
Posted by RheLynn at 7:52 PM