We've had a great and productive day.  Esme went to school and we went to buy the toilet while she was there.  She did not want to leave the playground when we arrived - thought the teachers were mad at her and that is why she needed to leave. We completed the toilet install, and hauled a lot of trash away.  I did some work in the garden and also went to see Grandma and Grandpa with Esme.  We put out another tray of seeds in the window and also repotted the aloe vera plant.  The garden still has a long way to go - but it is progressing nicely.  I need to get out and do some careful weeding tomorrow.

Esme's comment about the toilet:  It has no batteries and goes crack. (it does not work/flush and made an awful clattering noise) But, you fix it, and this one has batteries and does not crack!  She thought we did a good job.  She fixated on the new shiny silver bolts as the old ones had blackened. 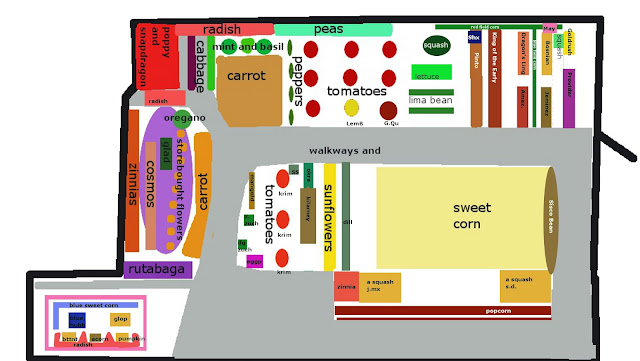 planted today:  blue sweet corn, new squashes in the bottom left hand square because it seemed the seeds had not taken there.  The blue hubbard and glop pumpkins are in that square too, but they are plants and seem to be doing okay.  The strawberry popcorn was put in last week in front of the sweet corn in two rows, with a few squashes and zinnias between them.  There is spinach planted between the rows of the sweet corn which is not on the map.  I found the summer savory and basils coming up in small amounts.  There is 'maybe' a speck of chamomile coming up - and I planted more again there.  The zucchinis are coming up by the black krim tomatoes in front of the sunflowers.  I put a few Kilarney beans in front of the sunflowers where the okra did not take.  I really think there are some 'volunteer' tomatoes coming up from last year - probably yellow pear tomatoes.  I see some carrots here and there, as well.  Only two of the lima beans are up :(

I put one third of the Virginia bright leaf seeds, several bean varieites and several squashes into the next greenhouse flat.  The tomatoes in the other one are getting close to having their second set of leaves and there is one solitary pepper seed that may be germinating out of three pots of four to six seeds each.  There may be more coming.

Labelling Notes for Myself:

The zucchini on top is the zephyr while the other one is 'dark green zucchini.' label from the sample bags.  In the bean patch the identifications are: on the left are pintos (second planting - first with parchman/lockwood which did not do well and now with my seed from last year) with blue/black shackamaxons on the 'top' (3/5) of the row by the red field corn.  The next row over is the 'King of the Early' bean, which came up the best out of all of them.  To the right of that and on top are the dragon's lingerie beans (2/3), then the maria amazalatei's bean (1/3) below them.  Then the blue field corn in a row, then the Bosnian bean on the 'top' (2/3) and the 'jimenez' on the bottom (1/3), the ingot summer squash is on the top between them, and the 'goldrush' bean (of which only one came up) is the last row on the right.  I planted more Provider bush beans where only one Goldrush did not come up, and the little pink square are Mayflower pole beans.  There are Dragon Tongue pole beans actually at the 'top' of one of the other rows but I did not note which row for the map.  The Lina Siscos are planted along the 'right' edge of the sweet corn and are bush beans - they seem to be coming up about halfway and I planted more of those today along the rest of the row.
Posted by RheLynn at 7:01 PM