While I'm waiting for the dirndl with the gathered sleeves to arrive I'm thinking of what to do next. I've finished knitting my green scarf, a hat to match and have started on a pair of gloves - but every time I go through my sewing patterns I keep coming back to the Butterick pattern as the best option for going forward.

But do I just alter it better to fit her or...? I guess I've been so busy lately I want something exciting and although making my own pattern is that - it is also a bit more involved tweaking bits here and there and making multiple items to compare etc... A new pattern to play with is what it is - and always will be material for the future. When the dirndl size 4 arrives I'll definitely be playing with it :) Until then I keep going through pages and pages of newly listed vintage patterns every few days, and have still not found anything more intriguing than this. 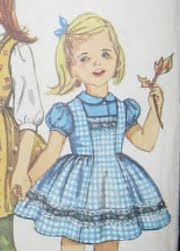 This pattern is VERY similar to the one I made the last few dresses out of - except it is a square neckline jumper with a fuller skirt. It has the same 'princess seam' front panel meeting a full skirt.

And I really should make a few more pairs of pants. I've made those two longer legged pairs but still have at least one fabric earmarked by Esme for pants that have not been made. My intuition says I'd make them easier if they matched a new dress :)

Other note: She STILL loves her Osaka dress. I asked her again today and she nodded and said she LIKES the pretty dress and thank you mumum :)

We are nearly ready for Christmas. We put up a set of snowflake lights I bought on clearance. Esme really likes them :) I wish they didn't blink, but well... they do. We have a few things to wrap still and a toy to put together. Esme really wants to put up a Christmas tree. She has asked me to put up a Christmas tree and/or have a Christmas present every morning and several times during the day. She brought me a superball and told me it was my Christmas present. Mark also thinks Esme was saying 'bicycle' (bik-ik-ik-ik-klee) in a very strange way after seeing her toy. I think she was trying to read the word off of the box. I heard her try to pronounce 'circle' a few weeks ago - and it sounded like 'curr-kuh-klee'. She's getting closer and closer to trying to sound things out - but then she will still do things like sounding out 'huh-ih-ull-ull' (hill) and saying 'house!' without even thinking there might be something wrong there...
Posted by RheLynn at 7:43 PM