A flurry of handmade bits and bobs

A little flurry of handmade bits and bobs - one from Christmas (previously undocumented) and the things I was working on yesterday. 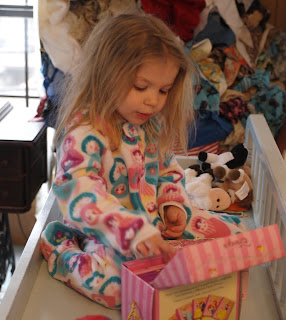 Esme playing with the other music box Santa brought her - it has books in it and she finally took interest in the books today. 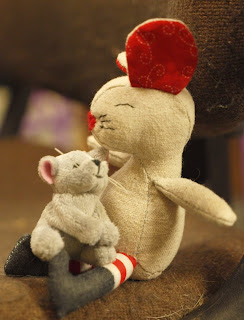 I made the mama mouse at work last month during lunch hours - and bought the baby mouse at the regular store. The baby has velcro paws and it can put it's arms around the mama's neck and hug. They are a sweet pair together and Esme likes to roleplay with them already. I gave her these as a gift from Mama to her Christmas morning before we went to Grandma's.

She's playing with them here... there is a ball underneath the funnel and they are 'talking' about it. 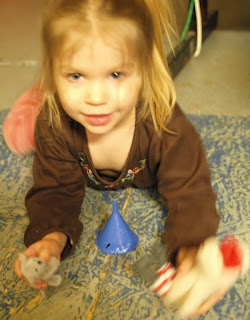 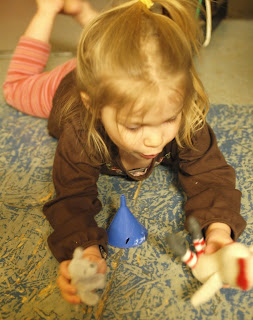 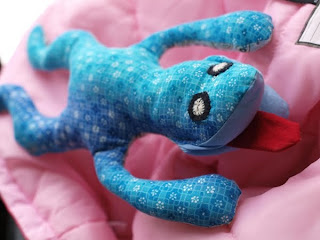 A blue frog I made yesterday.. just for fun.
His legs are very springy and he 'hops' well.

I made a few little things that didn't take much, and would get some use. There was also a pair of red pants cut out, but I plan on sewing them up today now that the machine has been working 'ok' for a while again. 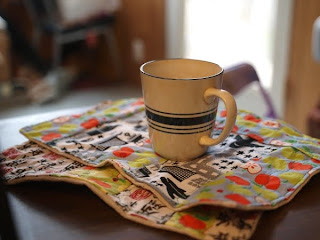 A good use of some small pretty scraps I had. They are smaller than placemats and larger than coasters - they catch bits under coffee cups and snack crumbs and can be easily moved around and washed hard. I put one under Esme's cereal bowl this morning and she seemed to like it. They are almost exactly like the diaper changing mats I made once upon a time for Esme *ha*, a universally useful kind of item. 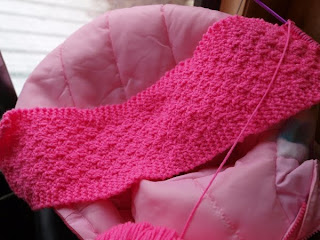 The violently pink scarf (in progress)

For the record: We showed Esme this picture yesterday and asked what she saw. She said 'dirty'. I said to her 'yes that is what it _is_.. but what does it look like?' She looked at it for a second, then said 'monster', which was pretty good. Daddy said he saw a horse, and she agreed. I asked her if she saw the horse's head and feet and she pointed to them, but she thought it was a mean looking horse!

Also for the record: I've started an attempt to eat a lot less sugar. I used to hardly eat any, everything was 'too sweet'.. but I'm relying on it more and more for something quick to bring to work. With my mom being a diabetic (and all her cousins, as well) - that is not good. I did a good job yesterday, and I'm planning to make some four cheese rice today and bring it and some crackers to work tomorrow instead of pop tarts.