It is Mark's birthday tomorrow - so we went to Jackson unexpectedly for him to pick up some new books that had been released. His big find was John Scalzi's 'Agents to the Stars' in hardcover, as well as some Charles Stross and David Weber paperbacks. He is curled up on an electric blanket now snuggled in the bed and reading one of them.

Esme was a VERY good girl in the bookstore, for a three-year-old. She ran around the room a lot, but did not bump into anyone, knock anything down and never went out of my sight. She also put everything she had picked up or investigated back in the right place and did not complain or cry about it. And when we were ready to go we put back the horse on a stick she was carrying and went to go see Daddy in the car. I had jellybeans I had bought for her at the coffee shop there - so there was a brief 'put me down!' when I started to carry her out but it was immediately followed by 'oh jellybean! 1 2 3 jellybean box please!' I said out loud to a store lady that a jellybean box was not a bad idea at all, considering the alternative ;) She thanked Esme for putting the horsie away where he lived ;) 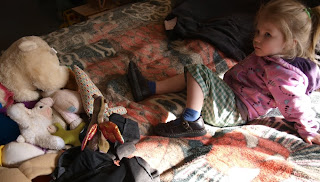 Highwater pants.
A good example of how much she has grown!

In the picture she has her knee up, but these pants are highwater by several inches when standing. I'm sure I've made these not too long ago... Mark called them the 'golfer' pants. The bee raglan shirt she is wearing under the jacket is getting tight around the middle, too. So - it is definitely time for me to get cracking on new larger clothes.

Mark's aunt Dot called while we were in transit - and she was extremely tickled by the pictures and card I had sent her earlier this month. I am glad she was so happy :) She gave me further encouragement to make a book out of all of the craft and clothing projects I've made for Esme over the years. It would be a huge endeavor! 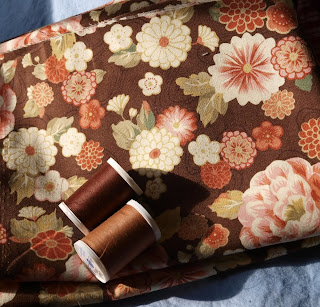 While we were all the way in Jackson, Mark said it would be a waste of a trip if I didn't go to Hancock Fabrics... Even with the latest influx of fabric I was left hunting through my stash for a few coordinates (and not finding them) and was running out of both colors of brown thread. So, I conceded ;) how could I not? I also let Esme choose a few other things within a small budget.

Esme chose this brown and pink floral. I would not have chosen it myself, even for her... but she was adamant about it. She wanted THAT dress... Hmm. I can see something very classic in it that will get a lot of use and wash well. So, a good choice. It was also the most expensive thing on the receipt! The kid has taste, apparently. I spent less than half of what I had at the Murray Sewing Center...but that is why I chose to go to Hancock's instead of the specialty store in Jackson. It wasn't my birthday ;) and I really only needed solids -- everything else was extra. 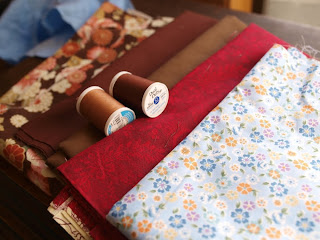 other browns and a red

The red fabric was also Esme's choosing, for pants - she said. I really thought she meant something else next to it - with dragons... but no, she pulled this whole bolt into the cart saying that THIS one the pants (and the floral the dress and everything else.. well the pants). I think I bought enough! She wanted some red plain fabric for pants, too - but I told her I had it at home. She really likes RED! The brown fabrics are solids meant for coordinating the fabrics from the last trip, and a blue floral I was surprised to see since the last time (6 months plus) I was in that store. I bought a half yard of the blue just because it still 'spoke' to me after all that time as something I wished I had gotten then. 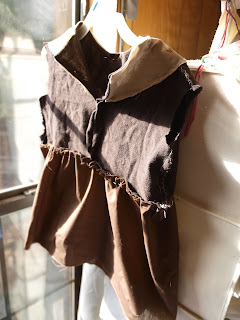 The project at hand

And this is the Cinderella dress - inside-out and hanging in the window for adjustment. It is half done and ready for the skirt to be better distributed about the waistline... when that is done properly I can sew it on and be ready to put the sleeves in and finish the rest of the hems and zipper. The sleeves will be some of the soft blue from the last batch of fabrics. Can you believe this is the same pattern as the cow dress? Butterick 2194.

I've moved my sewing machine back upstairs because it is just too COLD downstairs even in the middle of the day. Hopefully that will help me get more work done again. I had moved it down there a few months back when Esme was in her bubble obsession and didn't want to come back upstairs with me.

Sewing machine rant : The machine is a Singer Advance 7422. It wants to be a pain mostly when the bobbin thread is low... and especially when there is fuzz collected there. It starts churning and burbling and threatening to sieze. If it does sieze it throws the entire bobbin carrier into the back of the machine and nibbles on it with the needle before coming to a stop. That doesn't kill it, but it is a very tough thing to unravel and make right again. I have to take the cover plate off with a very tiny screwdriver (or a bobbin), clean out any fuzz in there, realign the carrier, fill the bobbin with new thread (emptying out the last few yards on it) and then reassemble everything and start over. And then it acts like normal... until the bobbin thread gets low again and it starts it's wobble all over routine again. Apparently... this is a common problem with this machine and it just needs a 'onceover' often. Mark is buying me a new bobbin case for it for Christmas :) The part is a 051045 Singer item (future reference) and they are apparently hard to find!

We were in Jackson yesterday too. i wish I had gone to Hancocks, but after Target (for pants - carter is growing like a weed too) and Old Navy for a coat, it was time to go.

It looks like the Cinderella dress is coming along nicely. I am excited to see it.