I heard from my father last night and he had a heart attack on Christmas Eve. He is better now, but recovering. I am very glad he is alright, and hope he takes care of himself now. My stepmom will help him, I know. (Thank you Susan and Elizabeth - he says he is actually feeling better now than he had in months, which was a sign for him, and he is working on eating properly and quitting smoking).

Esme's new phrase is 'I hate that/when that happens' - for when she falls down or runs into something or gets stuck in/on something ?? Mark thinks she got it out of a cartoon. She also wants us to get quarters out of the VERY heavy change jar for her to use in her jellybean gumball machine. It is hilarious to hear her ask GET IT I can't pull, and to see the reaction when I tell her those are Daddy's quarters and she already used hers up. She already had three quarters this morning out of my change jar and that is enough. She did get a tangelo when she asked for one, but only after all her cereal was eaten. She was fighting a helium balloon for a while there. Three times it came down from the ceiling and stuck to her hair when she was eating an orange. We told her it wanted some orange too and she told it no no go away my orange bad balloon. She loves the music box Santa sent her - it has a spinning Minnie Mouse inside and plays 'it's a Small World After All.' She learned to wind it quickly and now carries it around the house and plays it many times a day. 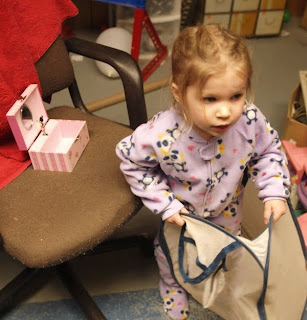 Wearing new footies from Aunt Gail
she likes the bears

and also she likes getting into this old worn-out hamper and wandering around the room in it...odd kid 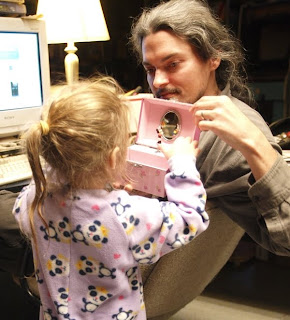 looking at the music box with Daddy

Trying to put a storebought shirt on Esme's head is like wrestling a rhinoceros. It takes three rounds to accomplish anything while she screams bloody murder about the neckline being around her eyes and ears. I think she just has a big head! We both like them just fine once they are on and she takes them off easliy... it's just putting them on that is the issue.

Sewing: The pretty little puff sleeve on the green shirt was of course non-functional. I tried to make some alterations to the pattern but Esme is not in a cooperative mood to try anything on that isn't 'done'... I might be losing ground already with doing anything like that for her.. or maybe she just needs a better goal. I got her to try that shirt on for a cracker *ha*. And I do know her pants pattern fits her - so I should go make that red pair of pants she wanted the other day, or work some more on the pink scarf she is happy I am making. Pick my battles well, eh?

Oh no! I am so sorry to hear about your dad. I hope he will be OK.

So sorry to hear about your Dad. Hope he's well soon!