Happy New Year to everyone! I hope you are safe and start the New Year with friends and plans to make 2011 even better than 2010. We are not doing anything special, just laundry and the usual... observe midnight and then head to bed.

Mark has the sinus yuck that hit me a week or so ago... I'm hoping he can kick it quicker than I did but it is making him quite miserable :( and he can't use aspirin which really did help me quite a bit when my sinuses were hurting with the slow sludge.

I've done well with the 'not much' sugar plan - haven't touched a pop tart or a Zebra cake since then ;) even though Esme has pushed them at me saying they are to go with my coffee! She ate a LOT of chicken noodle soup and even ate a few bunny cookies (although she cried for a few of them). I made an apple oatmeal pan in the oven (with brown sugar) and a 'strange' combination of vegetables and olive oil that went quite well on bread with a glass of milk. (kidney beans, red peppers, onions and mozzarella cheese). The four cheese rice went to work with bits of Christmas ham leftovers and crackers. And for breakfast I've made an egg one day and a cheese tortilla the other. I have been left VERY hungry between meals - lunch-->dinner and right before bedtime. Trying to find good things to fill in there, a glass of milk or a graham cracker etc...

I've finished Esme's pink scarf, and the blue gloves are getting closer to done, but only working on them at lunch hours. I've started another 'undocumented' project with some of the canvas that will show up later in the month. Also ordered a little of this fabric, which I think is very pretty. 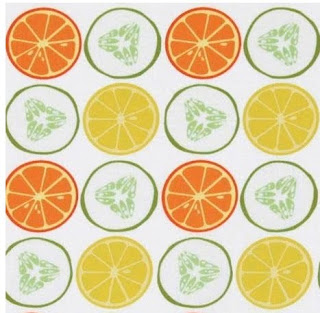 Will it be an Esme dress (my resident orange lover) or kitchen cloths? We'll have to see. If she doesn't like it I have plenty of plans it can overflow to.