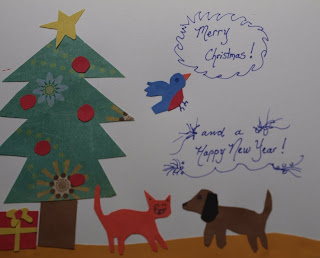 Merry Christmas and Happy New Year
from our house to yours 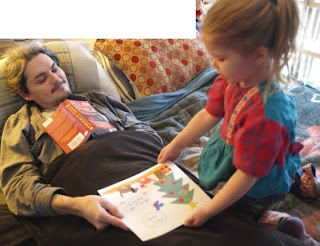 I have the day off from work so we are sitting home playing, toasting on the electric blanket and doing a few little crafts etc. Esme is watching Donald Duck cartoons with Daddy, who is not feeling the greatest but better than a few days ago. He has had a bit of an upset stomach but nothing serious. Thus, his idea to cook bacon just now has me a little at a loss for words - but if he wants to take the dragon by the tail it's his choice *haha* Esme and I will enjoy it, and so will he at least to begin with.

I've been unable to coax myself to do anything larger at the work table than this little Christmas card. I'm just happy to be off and able to putter around. I'm crossed between cleaning up some, just working on my gloves or starting something else. We do have a few more gifts to attend paper and construction to later on in the day, and a visit to Grandma's house perhaps. Esme has been cranky on and off since yesterday - but mostly because her nose is stuffed. First thing this morning she was VERY obstinate and did not even want to do the standard routine. A bath this morning with eucalyptus soap helped her some and Donald Duck is doing more. Her crankiness is another reason I haven't started anything major today, and a reason I'm listing Grandma's as 'perhaps'. If she gets in a napping mood I'm definitely going to let her!

We'll hang the Christmas stocking tonight before we go to bed. I don't know how that will go.. but I hope she will understand it and be happy to see things in it tomorrow morning! 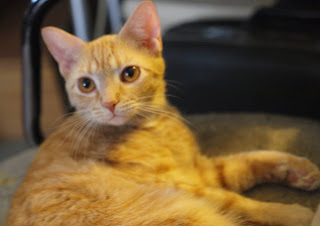 Peanut Ninja
It's not as nice of a picture as the one I captured of Suki, but here is our 'Peanut Ninja' cat, Ninja, for short. She is always at my ankles and following along at my heels. She is the most dog-like of our cats, and never goes outside. Sometimes she tells me when Esme or one of the animals is into things they shouldn't be - she stares at me with those huge eyes and tags my knee a certain way - then leads the way to the offending happening. I was talking her up the other day and realized I hadn't taken any pictures of her in a long time. We thought we were going to lose her from an infected neck wound a few months ago - but she recovered, and I'm thankful for it. She also REALLY likes potato chips, and will do a similar 'tag' thing when she sees the package in your hand and put on an awful show for it.

I am excited for your Christmas stocking plan and anxious to hear how it goes. We are also trying the "Santa is going to bring you something overnight" idea, but I am uncertain as to how it will go. Emily asked Santa for ONE thing (a yellow train), so of course we got it for her. I am excited to see if she "gets" that Santa brought it for her!!

We are also going to leave cookies out for Santa, which of course will be gone when she wakes up....