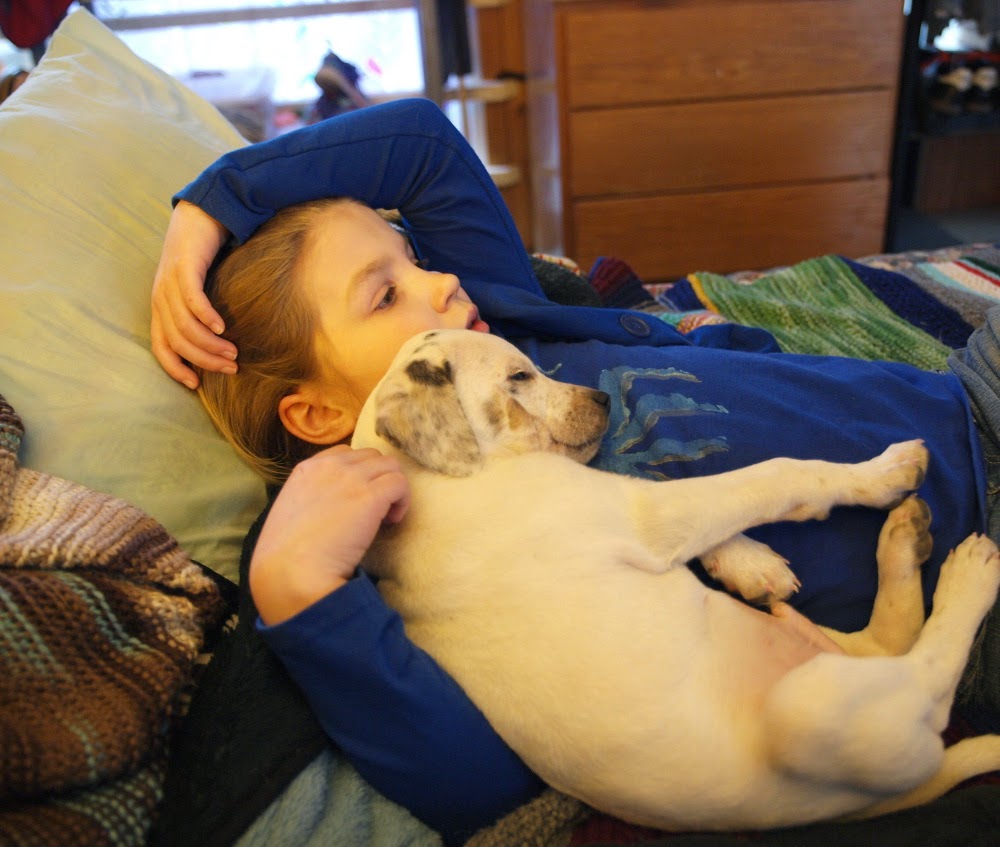 We had originally planned with a friend to go out to a park but they had something else to do last minute, so we made our own plans.  We bought some groceries and the sequel to Cloudy with a Chance of Meatballs today, and Esme and Columbus were watching it as seen above.  We also finally found a world map - and hung it up in the hallway where Esme can see it easily.  I've seen her steal glances at it on the way down the stairs...She may learn some of it by osmosis, perhaps.  She chose a Minecraft poster for her room and pored over it for fifteen minutes recognizing what was happening in the many scenes and if it was purely funny or a real possibility in the game.  She is growing up some - gone from having an animal alphabet poster on her door to a video game ;)

//laundry now and a few little bits.  Esme wants to try to feed Minecraft cake to pigs, as seen in her poster.

I've got to remember to look for 1987 NGs at the library this next time we go.  There is a map of walruses in one of them that we didn't have.


bits of note:  I've made a few observations lately.  Esme is much more 'grown-up' about some things than she was even last October (when we began homeschooling).  It's not across the board, but it is noticeable and it has been creeping up on me lately that I needed to try to put some of them to words.

She has finally started to take more direction for herself, and be vocal about future ideas although she doesn't always follow through.  She was in quite a bad mood when our friend cancelled on us - and I thought she was doing very well with it, but she blew up a bit later when something else didn't go as planned, and it lingered for a while with her unhappiness on things - but we told her to shape up and she teetered a bit and came back to acceptable behavior.  But, in her favor she did not throw any 'tantrums' .. just was unpleasant and snippy...that is a good change from a year or so ago, or at least a more sophisticated one.  I haven't been kidding when I say things like we've had a teenager in training since she was three...

Her language ability has taken another step up the ladder - which is a big thing because she HASN'T been in speech therapy or around many children her age, which were supposedly the best things for her (therapy and 'audio bombardment').  She listens more to conversations that don't directly involve her and remembers more of it for later -- a skill she was lacking on.  And she has started to understand and pick up some more of the little bits of language that are odd or colorful..  She is starting to sound more like a teenager in the words she uses, although she still makes tense, gender and question/declarative mistakes often.  'Do you want to know what kind is it?'  'There's Mom, Columbus, you can tell because he is much taller than I am.'

However, spelling and writing are her least favorite things.  But, I've seen her spelling improve when she doesn't know she's being watched (names in Minecraft, signs, notes she writes for herself)..and she is more willing to attempt to spell things phonetically than she was before.  She throws some huge words around now that she doesn't always know what they mean - but they're there.. and she is gaining ability with them (magnificent and superstitious and pteranadon, today...)  And her sense of humor is getting better.  She is less 'lost' when it comes to sarcasm, jokes etc..

Last bit, her names and pretends are becoming some bit more interesting and using info from many places..her creative streak is coming into it's own.   And she still does things that are very much like a seven year old little girl.   She had a sweet little 'dress shop' made out of a book holder box, some dresses I had made for other dolls and her chosen favorite animal dolls to put the dresses on.  Her rubber "Leaferella" frog was given a dress and getting some very special treatment (even a baby bottle).  Her own fashion sense is coming along nicely - pairing her clothes and such in a less haphazard way - that is worthy of note, too...even if it isn't something she sees in either of us, it is a step to growing up.

She made an awesome 'Flint Lockwood' type computer out of the bottom of her book box, drawing a screen and keys on it.  She then put on her white 'lab coat' and told me her new pretend sister Sam Sparks was coming for a visit and they were going to do science!  She said she can look up pretend things all day long on her new computer and real things on the computer upstairs with Daddy.

//Notes
Homeschool articles:
Why do some schools feel like prisons?   // Yes, if you had read our Homeschool Decision, this was half of our complaint about the local school district.  School should not be like prison.  School should have talking and playing somewhere in the day for six year olds - not constant lockdown and punishment for whatever the teacher decides is being punished today. ie: stand in your square, don't drop your pencil, etc etc..  They then tried to tell us those are the skills that she will need in her job someday.  I think you're doing it wrong, especially at six.
De-Schooling Me // Great article, especially about halfway through I started seeing the reasons we are homeschooling.

Note: The best medicine - humor and laughter - is the best teaching method with this girl.  She shuts down when something goes wrong, or she is wrong - perfectionism streak...trying to teach her to try again, laugh it off (if possible) and learn from mistakes.  If something is funny or really really cool - she wants to learn about it and doesn't mind doing things related with it, as long as they really seem related to it.  Bribery doesn't work too well...at least not for hurrying along - she is very in the moment when she is working on something.

We've been talking about 'the fourth dimension' though, and thinking back in all of the time you saw something (photographic memory, making it an asset) and thinking with your brain what the future can be - because we make the future, and how to make it happen.  She was skeptical about the idea when I brought it up a week or so ago (while looking for something at the supermarket that had moved) and now she is quoting it back to me and pointing out areas the skill is useful and how to use it.  //Mom would fist-pump the air at this one if it continues to progress!  My photog.mem has really become an asset in my work because I took the time to train it...it can still be annoying at times, too - but it really helps as well when I can quickly access orders and product locations in my 'mental file' instead of the computer one that takes more time.