Our not a snow day snow day and recipe

There was still snow, and we were still going nowhere today.  But, Esme was becoming listless and ornery about 10 am ... so we decided to do school today, but do it slow.  There were lots of grumpy times - mostly because I wasn't doing exactly what she wanted and I tried to hurry her to feed her chickens.  She was lolling in the bath and there was no more hot water.  She didn't speed up and Daddy did it while I was still fighting with her about clothes to put on to go back outside.  She did come back to center a bit later - she probably started out on the wrong foot having a corndog for breakfast (her own cooking).  Thus, I didn't press her to eat anything else 'big' later.  We snacked instead of making lunch anticipating a heavy spaghetti supper with garlic bread and possible baking. 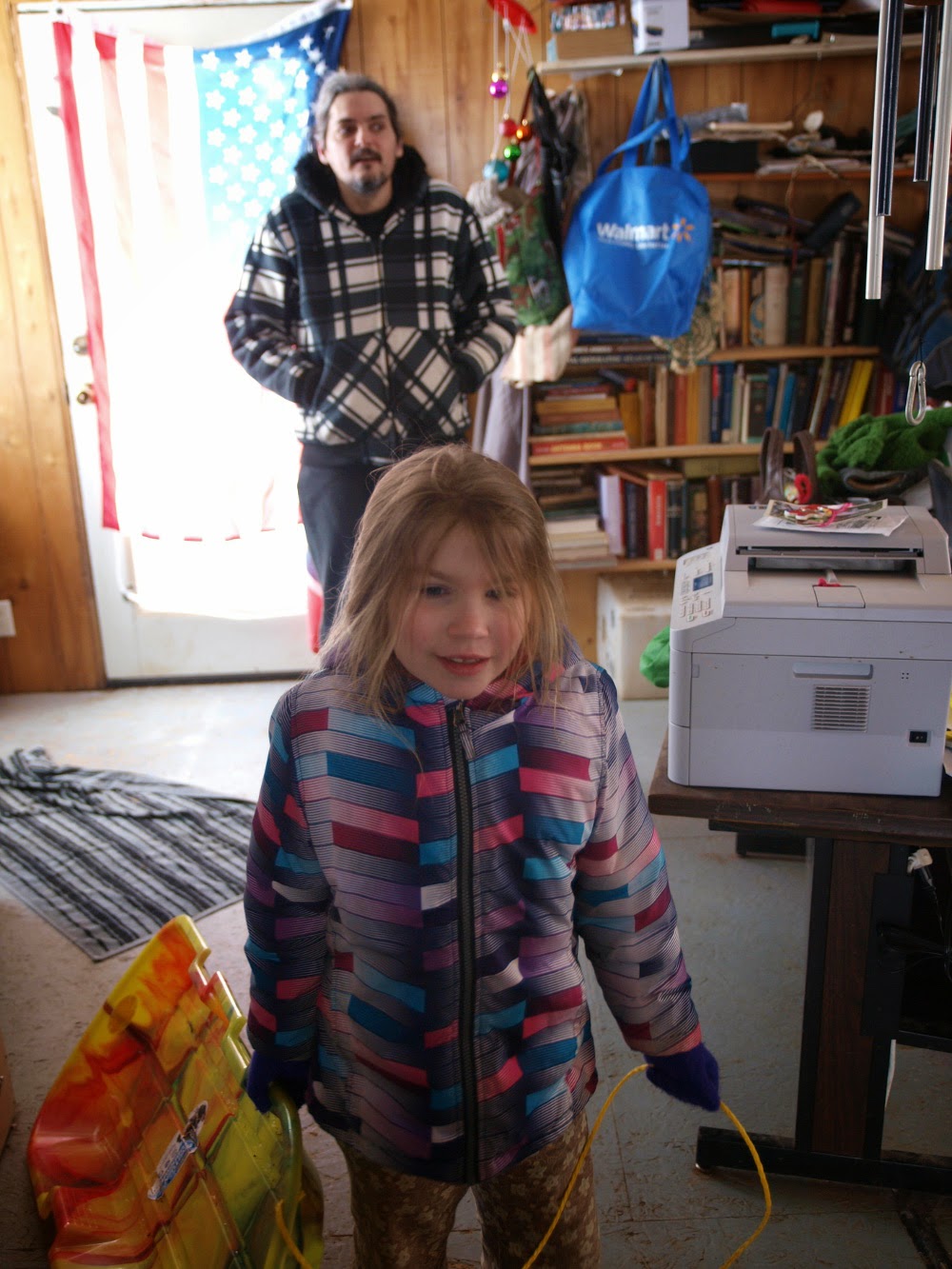 Coming in from sledding from the top of the drive almost all the way down to the lake (about a half mile) with Daddy as the steering gear.  Daddy says: 'successfully negotiated three curves and missed the truck (which was still mired halfway up the drive)'

12:00 - sledding outside with Daddy, then by herself
1 pm - break
1:45 - 2:15 - researching articles about what it takes to take care of a pet bird, kinds of pet bird
break
Playing dragon game on her own...playing outside
Attitude Check, discussion, bath and grump session - more playing outside and talking to chickens about why she didn't feed them (she insisted they needed to be talked to)...
break
Watching Joy of Painting - two episodes while eating dinner, discussing what she was seeing
Baking lemon cornbread cookie sheet with me.
Reading another chapter in the Stink Moody Freaky Frog Friday book.
We ended at 7 pm. 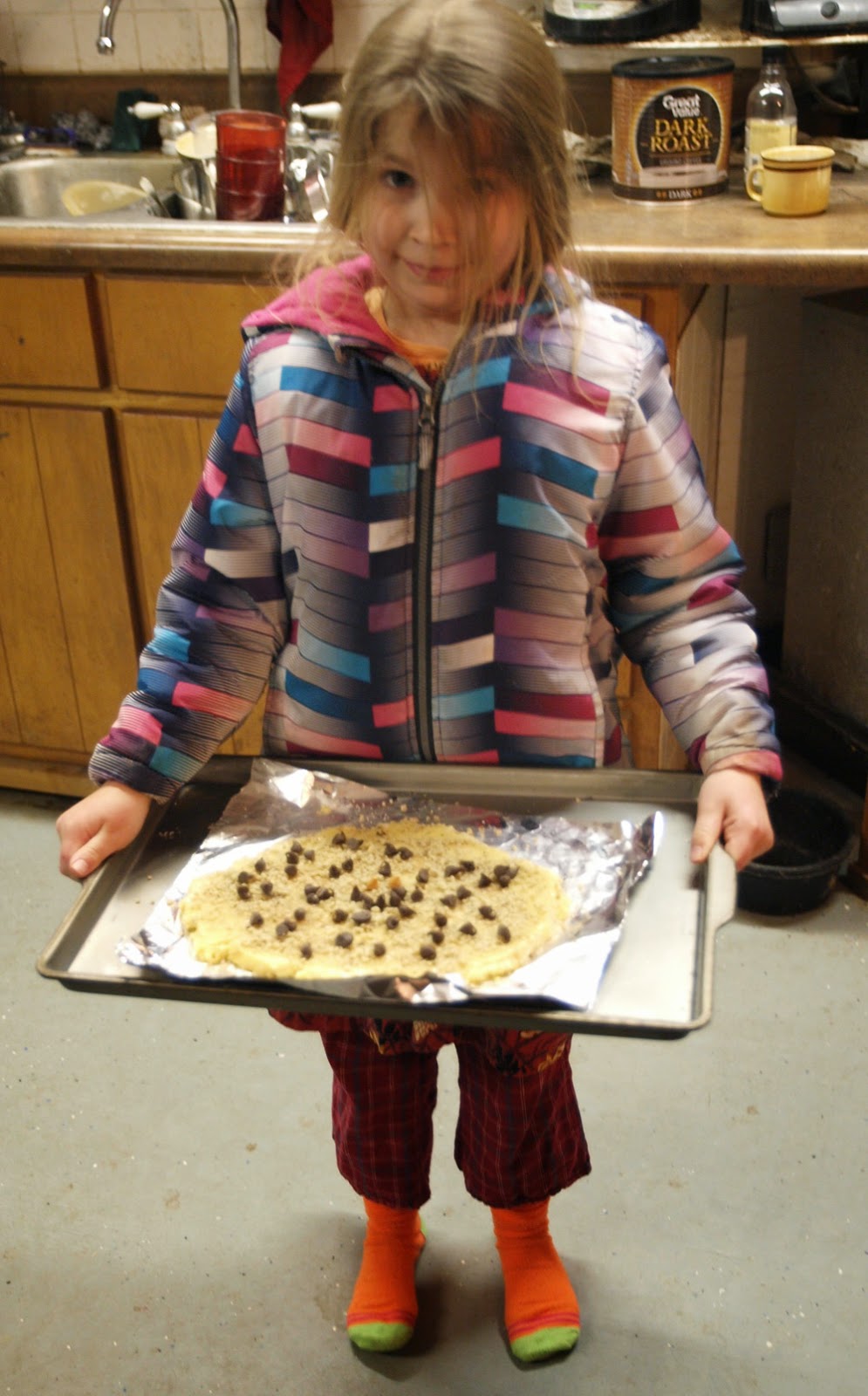 Baking with me the recipe listed below.
She had taken her jacket off and had a bath in between all of this...
and ended up never taking it off again after she came in the last time.

Preheat oven to 350 degrees, grease a sheet of aluminum foil with coconut oil and set aside on a flat baking sheet.

mix the flours, baking powder and salt together in a small bowl
beat the butter and whole egg together in a larger bowl.   Add lemon juice or zest - we had no zest.  Mix in the flour mixture in small amounts.. may add a tiny touch of whole milk if needed to combinen all ingredients.  It stuck to our beaters really badly - but we used a spoon to get it out from between the beaters.
.
Spoon batter onto the aluminum baking foil and press down as best as possible into a flattened ball.  Spoon on egg white and start to smooth mixture out to the edges until mixture is 1/4 inch thick or so.  It was amazing how easily the mixture began to smooth when the egg was spooned on to it - it felt like a whole different batter.  Sprinkle white sugar (optional mix some cinnamon in) over the egg wash.  Sprinkle ground nuts on to mixture and other toppings (like dried fruit, baking chips etc.).

Bake at 350 degrees for 27-30 minutes.  Edges should be browned and little bits of brown showing up in the middle here and there.  Remove from oven, carefully use a butterknife to separate the cookie from the aluminum foil... leave to cool and tear off piece
Posted by RheLynn at 5:48 PM