I am listening to Haydn's 101 in D-Major (Clock Symphony) while drawing today.

We had pizza last night! We rarely order out, except for Lucky Dragon Chinese. I got my own medium black olive and mushroom pizza, which lasted through breakfast.

J, who is 6'4", finished off a large vegan pizza by himself.

Willow is organizing a delegation in support of opening a can of tuna early. She claims (loudly, mind you) to be hungry while her bowl is full. She then rushes to the kitchen when I get up from the desk. These cats are spoiled... they get a half-can of tuna about once a week.

I am wasting away my morning doing :

1. Playing Sudoku!,
But I am a wimp; I have the hints turned on.
2. I wasted at least an hour at Kittenwar.
Some people have made up very unique dual cat names.. like Chamomile and Earl Grey, and Thelma & Louise, Gozer and Zhul.. and maybe Chaos & Diablo will be seen, soon, there too ;o)
3. We watched the comments on two eps of CSI...
I could swear they had the actor that plays Gil (Billy Peterson) stand in for the coroner on one of the episodes. J doesn't believe me...
4. Hopping through blogs connected to Crafting Japanese.
Hop, Skip, Jump has more herringbone creations!

Actual work done, (not a waste!)

I've cut out all of the pieces for this patchwork to back Miss I's gift. It may actually be prettier than the original patchwork for the front. In plain geometry, however, it might hurt the eyes! All of the fabrics are scrap pieces. The pattern in red is a friendship star. I don't remember if the pattern the white pieces are making is called 'Broken Dishes', 'Whirligig', or something else altogether.--I take it back, it looks like a variation on either Lincoln's Platform or Churn Dash, with the friendship star added into it. 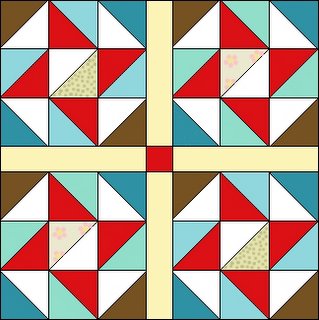 I have to sew it together later.
We made big progress on the puzzle, but it isn't finished yet.
J says his brain was injured somewhere between the jigsaw-puzzle and Sudoku ;o)

The purple sock is now cast on +5 rounds.

I can't look directly at that quilt graphic!

Diablo is doing better than
Chaos so far...

Oh... They got up to kittenwar so quickly! I'm amazed!

I see Diablo winning 5, and Chaos battling 6 and winning 4.

Not all of the actual fabrics are solid colours, making the result much easier on the eyes ;o)

Woah, is Willow on there? I think I got Willow!

I checked out kittenwar and found 4.5 Trouts. (.5 because one is named Lincoln Trout) I am surprised. What a cute website.

There are -lots- of Willows on kittenwar, and oddly, quite a few of them look like my Willow!

I only submitted the 'gangsallhere' picture. I did submit one 'Willowpede' picture, but they must not have liked it :o(

I posted two of the 'kitten cuteness' pictures to kittenwar.. let's see if they get in!

They don't have any Salamanders or Willowpedes in their search engine!