My oral surgery is today.  Trying to get the laundry done and mail sent out before I have to see just how functional I will be.  Downloaded a few new books onto my Kindle, as well.

I've already started easing Esme into the first grade writing prompts.   I'm trying to use a Minecraft mailbox to make it work better .. .as she had a stomp off fit the other day.  She is so perfectionist she doesn't even want to start - lest she have to ask how to spell a word or write something wrong...and then there is the fact she just doesn't like how slow writing is...so many other things we could be doing! *reach terminal mass and explode*  That is what it is like sometimes trying to teach her anything.  But, because we know this and that it comes and goes in waves - we persevere. 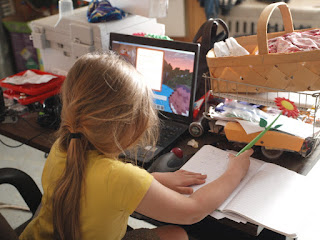 writing her journal entry prompted by a Minecraft note I had left in her mailbox.
It worked for today- she has four more days written out for her to answer the prompt.. we'll see how it goes.  The other night her blow-up was because I hadn't written the prompt down and she 'couldn't find' it in the blank book.. and didn't have 'any idea' where to write her answer because she didn't find the prompt.  She was being difficult for the sake of stalling...maybe she could stall right out of having to do it, or go run and hide and not do it..etc...We did argue, she did attempt to hide in her bed..but she ended up doing the sentence easily about five minutes later (after Daddy and I both told her we disapproved and expected better of her at this age).  There are also several things she will not be considered to be able to do (like a sleepover at a friend's she doesn't even know about) I hinted about once she had come back upstairs and was sitting at the desk again.

Also, I am planning for the school year...still...
I asked her if she would rather have several books that were 'easy reader with pictures' style about animals solving mysteries or one book to read with Mom about a mystery group of teenagers who have to travel in time to solve their mysteries.  She chose the second with great excitement over both the 'teenager' and 'diamond chip' and 'time travel'.  So, I am thinking to order that book coming up soon - it is from Tumblehome Learning Press.  We are almost finished with Little House in the Big Woods and before I continue with 'on the Prairie'  I think she wants some more 'excitement'.  They also had a cool dinosaur exacavation kit.  She says she loves fossils -she found one out in the yard.  We looked at it under the microscope and she drew a little line drawing to send to her Great Aunt in the package I need to send today. 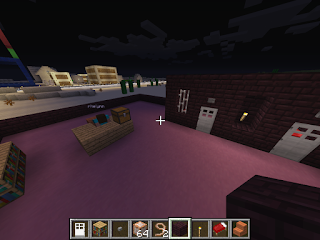 Besides building a home point for her Mixie Engineering Primary School (and mailboxes) in Minecraft, we also built teleport stations between the major landmarks (and she had to figure out how to get to places that required two or three jumps between known places, which she said was annoying, but she picked up quickly we couldn't have a spot for every junction at every place)...and we made a jail out in the desert.  I said we needed a saloon or tavern, too - for the Sheriff to keep busy ;)  The jail has two cells, an evidence lock-up, an armory chest and a lost and found station for lost horses.  She pretended to have the 'sheriff' sleep at the desk while the jail was being built. (picture above).

So in a few hours after my oral surgery I probably won't feel like posting much..not sure actually. But we are getting it done.  **hopeful** that the healing won't take too long...