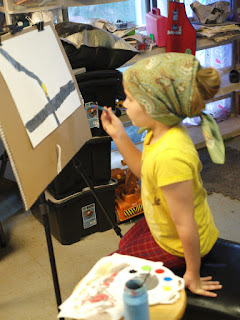 Her hair was swishing around even in a ponytail and getting onto the palette, so I tied it up in a scarf out of my dresser.  She is painting a 'road scene' with a traffic light and (eventually) lots of grass and some cars. 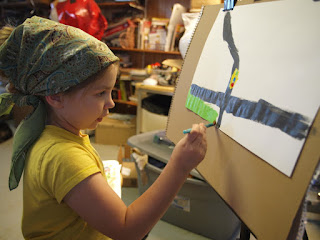 I told her we need to print out her quote from the other day (about her writing journal, but it pertains here, too.  'Practice Makes Greatness!'(I ordered it as a cheap poster at the photo center - we'll get it in about a week and hope it looks good!)

We also received some of our dinosaur and evolution dvds in the mail that will go with our science unit this year. She wants to know if Jurassic Park could have been real, how the 'blood sample' became dinosaurs, if extinct creatures can be made again, and a host of other things related to the topic.  So, we have some background info in video form, a magazine and a few websites earmarked for discussing that topic.  I am wondering a bit if I need to plan out an order of topics....we usually just go 'organically' with what she asks about and hopping around to relevant information as she needs it.

A few other notes:
Definitely do at least a good overview of geology and fossils before we do the museum in Kentucky later this year...

In the Spring we might be able to find a docu on the Rosetta Stone and early writing because she has asked a few questions to that regard.

She asked me to find some Spanish resources for her to look at this year - and I bookmarked them in my browser.  She was also asking a lot of questions about vocal chords and air and food tubes she saw on the organ chart I drew the other day - so that was a discussion before bed.