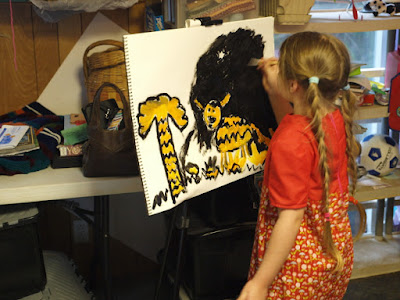 Painting - that is a cow, in tiger world.
She wants to send the painting to her Aunt Dot.

We're into school again August 3rd or so.. but Esme is ramping up ideas now.  I'm still hoping the oral surgery is not going to ruin that entire few weeks following it -- I'm a mess sometimes now with the infections I am fighting...but I am much closer to functional than I have been in weeks previous.

The library was closed today - for the holiday weekend coming up.  We did go to the park and Esme met several little girls.  They said they did 'Itnernational School'..and had been homeschooled at one time.  They were on a trip East for the holiday.  She really enjoyed playing with them.   We also discussed why 'the fourth day in July was the important day'... we shortly discussed the American and French Revolutions.   She also decided that we would study some more countries this year with geography and a sticker passport she found at the dollar store.  There is an online service for that -but it sounds like we are going to 'wing it' and combine it as an idea with our other studies.  I'd love to get her a few foreign coins and stamps as I loved those as a kid - that I would spend some money for as keepsakes.

I've printed out a set of photographs for Aunt Dot now- to go with my letter I just keep not sending.  I'll have to write an update letter, too.