This is in the Freeway world she has been working on with Daddy: 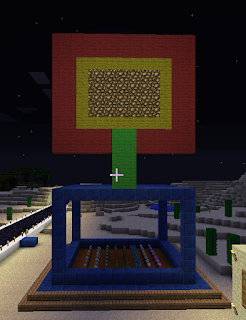 It is a flower stand - pick a flower, and put a dollar (gold bar) in the chest to pay
We have been playing with fireworks and also with making a 'currency system'.

They have really expanded the map lately.  They found a desert village and connected it to the Freeway, and this flower stand and a new 'mushroom soup' (Mushroom Dooshroom Family Restaurant) restaurant was built with fresh Mooshroom cows in the back pasture to assist the chef in his preparation.  She put hoppers for the tables so the waiter could dump the food order right into the hopper and the customer could leave their payment there.  She was using book and quills to write the orders down in shorthand and depositing them in the chest by the kitchen :) 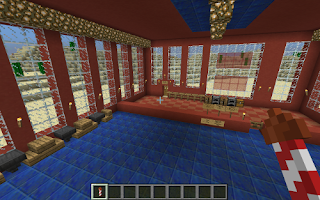 The serving area in front and the kitchen in back.  We built the walls of this together but she had the floor and counters laid out and the colors picked out for everything. 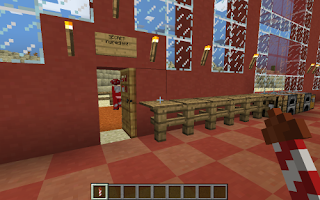 The 'secret ingredient' ala Willy Wonka

The other project lately was the hospital - which Daddy gave her over an abandoned building of his and she built in ideas from a little map I sketched so there was a waiting room, and operating room and a recovery room.  We did a 'mock operation' there like the appendicitis operation she saw in the Emily of New Moon episode.  I wrote her several books in Minecraft about appendicitis and the names of bones to have in her hospital library. 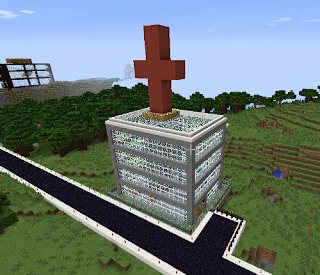 hospital outside -it was Daddy's build, and she put the cross on top and made the inside 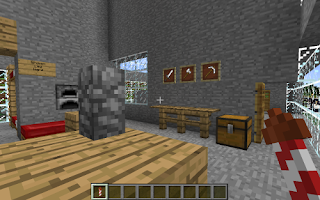 The operating room.  The stone cylinder on the table in the foreground is a 'cylinder of coffee - for the doctor, when he needs it'.  There are beds to the left for recovery - in the 'broken leg ward', 'sleepwalkers ward' etc etc..

Tonight I made a large building out in some flatland just for the architecture of it -and because Mark said I needed to make something 'big enough to show up on the map'... should post the map soon.  His smiley-face bank building and her giant red T-rex do show up prominently :) Mama's build - it looks a lot like the civic center I grew up near..although I didn't have any plan when I started building it last night.  Mark says it is asymmetrical and that bothers him ;) heh. 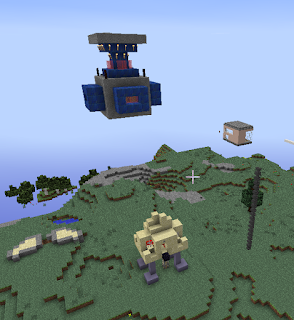 Alien spaceship and lander - this was a pretend she really wanted to do the other night.
She then filled the spaceship with chickens *facepalm* 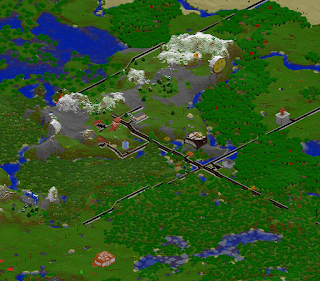 A cropped down map of Freeway World.
The T-Rex is left of middle... the hospital is in the right side edge...Daddy's smiley face bank is upper middle-right.. my civic center is lower middle-left


Unrelated Note:   I had her read more with me in the Little House book (we need to buy the next one...we're more than halfway through going a chapter at a time).  Her reading is getting more natural- still runs between her sentences sometimes where she has to stop and look back...still has some pauses and 'errs' while she is reading ahead faster than she can say the words.  But, she is retaining what she is reading -and some of what she is listening to (even though she was fidgeting and playing with flower petals while she was 'listening')...she was able to tell me several specific details from the story later while we were doing a bit of writing.
Posted by RheLynn at 3:16 AM