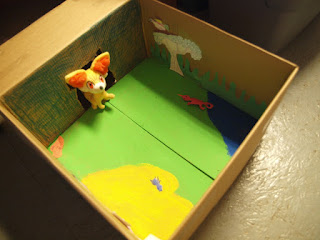 Story by Esme, habitat project by Esme with help from Mom

Once upon a time, there was a fox, that lived in a den.

A heron caught a cricket until two mice stole it and put it in their food storage.
The mice lived in the grass under the big tree, in the ecoystem.  They were husband and wife and helped each other get food, and to stay alive  They were in survival mode, and didn't want to be captured by the big snake.  Or, (eaten by) the fox.  The fox came out of his den and played in the lake with Larry, the heron in the lake.

A salamander crawled into the fox den and looked around.  He saw a picnic blanket and a chicken bone. He also saw a bed made of feathers and grass.  He got back out.  He asked the fox if they could have a picnic.  They would bring chicken, earthworms, crickets and bugs to the picnic.  And maybe a blanket, and maybe some fish.  The fox would bring some flowers, because he loves them.

The snake would bring some hares and rabbits for the picnic, because he is a top hunter.  He has poison in his teeth.  The bird came back from the South and joined the picnic.  Her eggs hatched in the nest in the tree, and it was a happy ending.
Posted by RheLynn at 7:11 PM