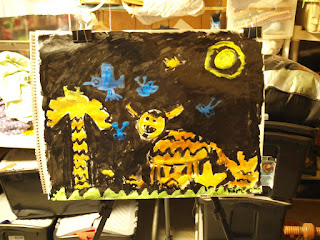 Esme's finished tiger world painting, ready to go out in the mail.
She says the sun has a heat circle (halo) around it, like the sun and moon do in her dreams. 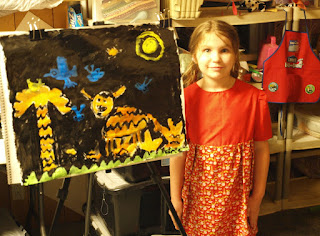 A silly expression from the painter herself,
a moment before she dashes back downstairs to work on whatever project she has going on there now. 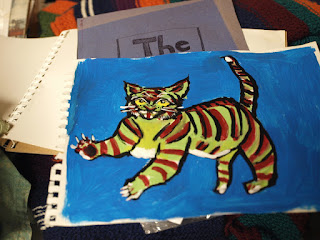 I took a little painting as well, trying to make a 'tyger' illustration for the William Blake poem - 'Tyger, tyger burning bright, in the forests of the night...' etc.  It is one of the ones we will put in our book of poetry for the school year with the illustrations.

It is the Fourth of July - but it is raining, and we haven't been able to do any fireworks outside.  Esme wants to do some in Minecraft to make up for it. We had started to talk about the poem of the Star Spangled Banner, too -and how it became our national anthem.  I will do a day on it in school time, too - with some good visuals.  I remember being taken so greatly on a PBS special or something with visuals of the flag in the battle scene and bombs while the words of the poem/song were spoken.
Posted by RheLynn at 5:50 PM