McElvaney ordered a team of construction men to come from North City starting in year 4.  Michael Perkins arrived with his wife, Julia, and his foreman, John Roberts (wife Rebecca, four year old daughter Alice) and a crew of ragtag men, some no more than 12 years old actually, coming along with their older brothers to help build this new city down on the river.  Perkins issued orders for another set of men and boys to come in year 12, as well. 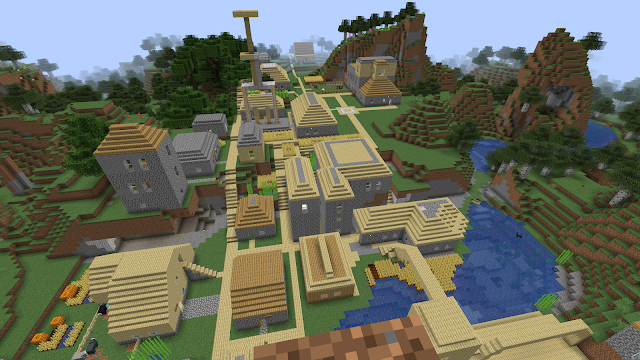 West Rivertown.  The Robinson house is on the right, the one that John Robinson built after his wife and he moved out of the second story of the City Hall.  They had three children in the house and took care of numerous bee hives around the area.  There are deep mines leading to lava and mineshafts on either side of the house - so you don't really want to be caught outside there at night.  In the far distance is the house Jack Iyaga built for his son and daughter-in-law. 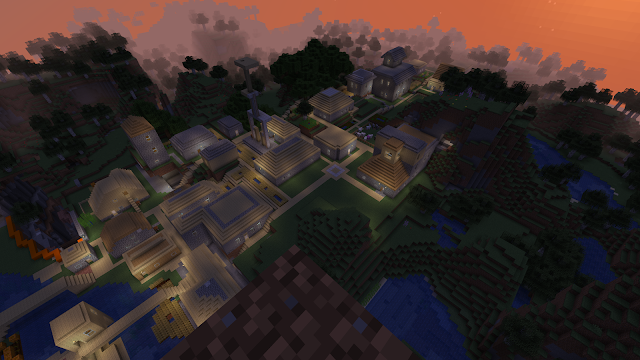 West Rivertown after the building of the Porter Thomas school (Porter Jackson, Tan Vandreas, Albert and Argo Thomas, all cooperating)

Andrew Burke moved to Ravenna when he heard they needed a roofer and that there was plenty of room for him to build as tall of a tower as he wanted, perhaps even with cannons on top.  He was an instigator in getting Conor Eastham (of the East Native villages) to make the trek to Rivertown and court Cora Robinson.  This was also the only roof in the village Burke would not work on - John Robinson's third story set high above beehives and skeleton-infested mines.  Conor helped Robinson complete the building and several months later, won Cora's hand in marriage and brought her to Ravenna.

Andrew and Mack moved into Ravenna to work in mining and construction.  Andrew 'Andy' Gordon (as compared to Andrew Burke) was also looking to work on his inventions, a blast furnace and a composting bin.  He has succeeded in the composting bin.  Mack had his eyes on the doctor and midwife, Melodie Whitacre, a woman who built her own house, captured wild sheep and had made the trek from North City entirely on her own responding to an advertisement from Benjamin Pippington.  She had survived attacks by Drowneds along the way, and had introduced herbalism and new plants to the city.  After about a year of failed courtship attempts, Mack rescued a cow from a mineshaft using nothing but a rope, and soon afterwards, Melodie agreed to marry him.  They moved in across from the clinic in Ravenna, leaving the Gordon house to brother Andy, who was still tinkering with his gadgets.

Argo and Albert asked for their wives to come to the city in year 6, ushering them down the river with Harry Patterson, and building some of the first Perkins houses that were off the center of the town.  Argo and Albert were both very interested in trees, which John Robinson, was as well, as sources of apples and wood to build the burgeoning city.

An old pirate, Jack has mostly kept to the barracks and helped with a few mining expeditions.  He refuses to climb the lookout towers anymore, but has written to North City Remnants several times looking for his family, which he always intended to bring to Rivertown.  As of year 35, there had been no word from any of them.  In year 37 his son Porter Jackson came down the river with his wife and two young daughters.  Jack built them a house in the West Rivertown, somewhat beyond the Robinson complex, and is enjoying watching his granddaughters grow up in a world so badly changed by the Earthquake.  While building the house, Iyaga almost died because he had not installed windows.  Pillagers arrived and shot him through the window opening while he was working on the loft for his granddaughter's beds!  He took an axe and finished off one of them before running for the hills.  It was only lucky that the little ones and their mother were over near the Robert's restaurant at the time. 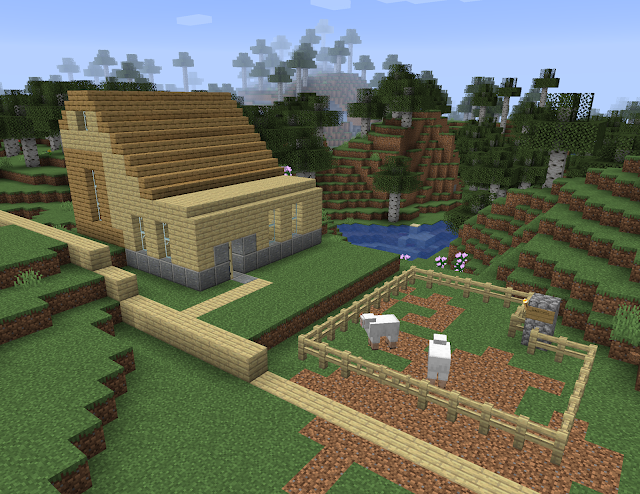 the beginning of Iyaga Farm

Porter Jackson (son of Jack Iyaga), wife Nanette and daughters Ricca and Nessie, son Kyle born here after settling in Rivertown.  There has been some contention as Porter has been mining in a deep mine to the West of his house and he is trying to claim not only that area but his own house and farm as his property.  That is more property than almost anyone else in town has claimed.  Several of the elder men are saying he needs to get a partner in the mine and then between the two families he will be allowed to claim half.

Tan Vandreas was the person to answer the classified ad for miners, and he built a small house and several extra ones near the Iyaga Farm for future workers.  He also teamed up with Porter, Albert and Argo to build the Porter Thomas school, a two story three classroom school that was the city's stipulation to ceding that much land, split in half, between Jackson and Vandreas.  Vandreas plans to rent out his extra houses and eventually settle the land even further to the West.

Also, word has it that Mattias Phillips has made it to the Nether World.  He found diamonds and obsidian deep beneath the Robinson mine and came back bearing very strange mushrooms, samples of wood, and a lifetime's supply of gold.  However, he has said the doorway was destroyed, and he has had enough lava for his entire lifetime already now... 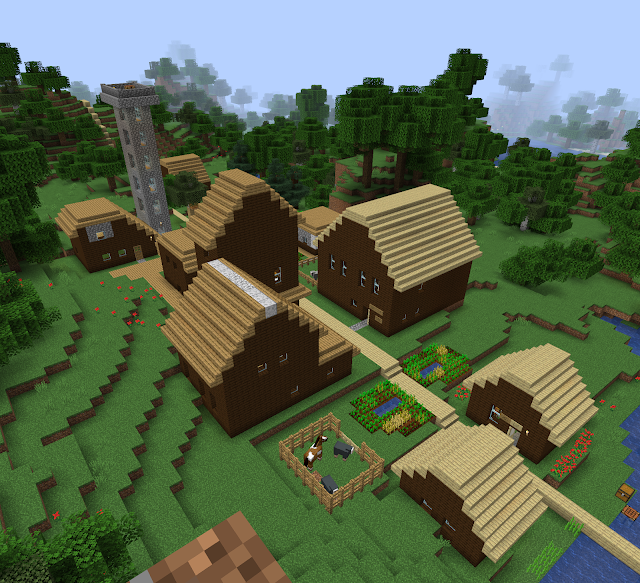 Rose Red Iron Mining Community (Rosered)
the building in the farthest right back is the school
also the home of Stanley North, Earthquake refugee brought his two daughters.  Stanley is a weaver from the old school, he can even do the flower pattern.  The community was first formed by Joseph DeCroix, his wife Isla, and a fisherman Nicholas Long.  Victor Trent and Zari Dee came to the community after the first large amount of iron was pulled out of the ground, and the mineshaft was discovered under Long's house.  There are tunnels connecting at least four of the houses to the stone tower, due to an extended Pillager fight that actually went inside the DeCroix house and almost killed several of the citizens.
Zari Dee and Victor Trent were some of the young men that had come to make their fortunes.  After learning the trade, they were lured away by Joseph DeCroix in the Southern territories when he built his Rosered Iron Mine Company around year 20.  They both moved there to mine iron and to grow their own families.  Zari took a girl from the Eastern Village with him, Osterham was her last name.  Victor took with him the younger sister of Sandra Parker (nee Knox) who had come down with her from North City.  Sandra did not want her younger sister to be moving so far away, but the city was rich with wheat coming in and the entire country was expanding.  They had come all this way from North City - a little further, her own house and a growing town?

Kenzie is going to travel to Vanter, the land of birches hanging in the sky over the lava fields, and make his own forge there.  Vanter Forgeworks, halfway between RoseRed and Rivertown.  He is instrumental in creating the road that connects the two.

Paul Allen went on the 'Eastern Sea' expedition with Sevier and Pippington - and then fell head over heels with the daughter of Paul Daniels, young Piper.  He established a small enclave he called Piper's Cove, and, having the 'discovery of the Eastern Sea' under his belt (we later found out North City called that place the 'South Bay') they married and settled there, forming an animal trading post with sheep, cows and a blacksmith's forge for their youngest son Kallum, with apprenticeship help from Sam Sevier (who by that time had grown quite old and who had never married).  Piper's Cove was plagued by Pillager raids, and potential contributors Niko Otrio and Thaddeus Pippington settled in a nearby bay forming the city of Cod Bay with Callum Barham, a fisherman who had come in from the Eastern shores.  Paul Allen's daughter, Iris, married a Robinson and moved to Cod Bay.  His other son, Alvin, took a long trek close to Rivertown, in one of the most dangerous swamps, and married a Parker girl (Sara Parker, daughter of Sandra and Matthew) forming Meadowview Farms. 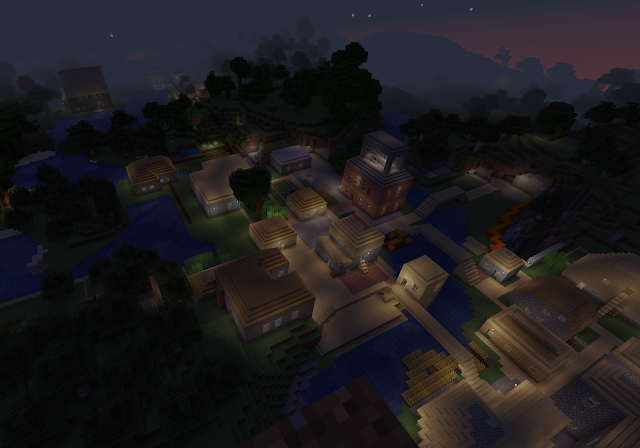 East Rivertown and Benson's Pointe beyond

Goes with Alan Kenzie on the road building expedition to Rosered.  Settles in the mountains east of Rosered at Pennock Farm.

Mattias Phillips came to Rivertown after the Great Earthquake in North City (year 30) with just a pickaxe, two torches and a bucket.  After spelunking several times in the caves behind the Robinson house, he built a furnace, smelted iron and then constructed a two story house behind the Thomas orchard.  He did odd jobs until he could get his own cows and fields in, and then began to make his intentions clear to Albaree Thomas.  She was a pale, thin girl, not the prettiest of the Thomas sisters (of which there are four) but there was something about the way she moved through the trees, her gentleness with the animals - he set out to make his home lovely and inviting, and after several festivals and a long talk with her father - Argo Thomas, about orchards and cows and the West - Mattias and Albaree were married.  Their daughter Kyra was born in year 33, son Cyrus born in year 35. 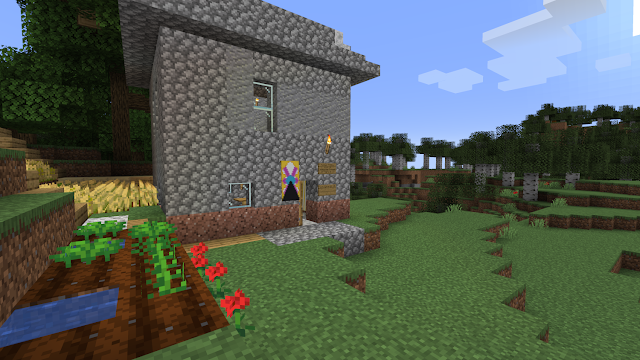 the outside of the house Mattias built for Albaree, with vegetable gardens, flowers, banners and rugs - soon, the Porter Thomas school will be built right beside this and the land will be developed..