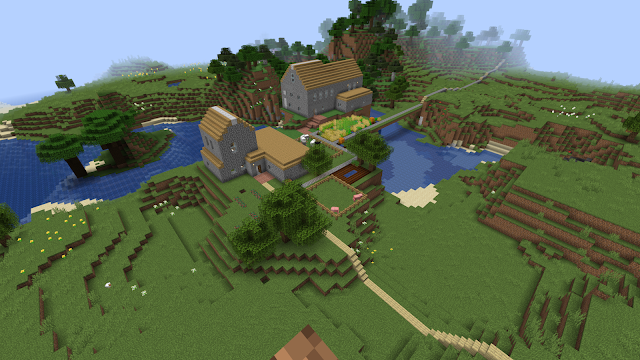 What do you do when you fall into the gorge and almost die?  Get nursed back to health by an angel and whisk her off to WestSea, apparently.  Hey, it's happened before (Maisie McElvaney, Alex's mom, but that was more a joint effort).

However, it is very sad that in year 44, Maisie succumbed to the Fever in Rosered.  Everyone was sick, Peter and the children, but they recovered.  Maisie did not, as well as five other citizens of Rosered.  (See the Ravenna Medical Expeidtion's rescue of Rosered)  After that, Oliver left for Semmerly, and the girls Callista and Magdar haven't quit fighting.  Peter, their father, works himself to death in the mines with Joseph DeCroix, looking for something he isn't going to find down there.  Maybe once there are some grandchildren in Semmerly Alex can convince him to take a boat over there once in a while.

In Years 46-50 wedding bells were ringing all over the area East of Rivertown.  Callum Barham of Cod Bay was quoted as saying: "What used to happen once in a blue moon is now every other year... but they're growing up, it was to be expected."

Alexander Daniels was headed down to Rivertown in year 49, after his brother had settled in the Isle of Semmerly and left him not only the farm, but two sisters who did NOT get along.  He took a breather, leaving the animals in Callista's capable hands and headed out, first through Rosered, in search of trade and maybe love.

From Rosered (where he was roundly rejected by the DeCroix sisters, Sheila and Wanda), he headed to Rivertown to see his grandparents Paul and Pilar Daniels.  From there, he took a trip over the bridge to Meadowview Farm, to visit with Alvin Allen, his cousin (Piper's son) who had established a farm there almost ten years earlier, and married Sara Parker. (Note: Alisa's father's much younger sister!)  (year 40).

Alex traded pumpkins and eggs, and a few other things to bring back to WestSea to start to expand and build his own farm (away from the dueling sisters).  Alvin had this strange old map in the bottom of his chest.  It was something that no one had been able to really get a handle on.  Alvin had found it deep in the mine below Meadowview, but since he couldn't understand it, he had tossed it in the bottom of the chest and thought no more of it.  It was luck or fate that Alex pulled it out and Alvin said 'Oh sure, take that.. I never could figure it out.'

The next day Alex was walking to Rivertown and felt a tingle in the map - he pulled it out and realized he was at the very southwest edge of a very northeast map.  He began to follow it... but that is where Fate brought her hand in.  At the top of the hill East of Rivertown, he was looking at the map while coming over the hill and... *deafening THUD* he fell into the South edge of the Rivertown Gorge.

Years earlier Kori Paltry had been ridiculed for his 'ridiculous' (according to Lanier McElvaney) orange concrete wall, he had put up at the edge of the gorge, to keep passerby, sheep and children from meeting a terrible fate.  However, the wall has truly served it's purpose all of these years.  Too bad for Alex that the wall didn't extend all the way around the Gorge!  However, lucky for Alex that the wall had also become a gathering place for some of the younger people of Rivertown.

As Alex lay there in a mess of pumpkin and egg, moaning softly and worried about Zombies in the caverns... someone heard his cries.  Yuri Patterson was out in his yard after working with chickens and sheep and he heard the strangled scream of Alisa Parker, as she looked down into the gorge and saw Alex, barely clinging to life with half a heart.  Yuri organized a rescue party and they pulled Alex out of the gorge and to the barracks in Rivertown.  There, with the help of Rebecca Roberts' fine food and lots of care from Sandra Parker and her daughter Alisa, Alex slowly came back together and soon enough, was pronounced he would probably live.

And live he did.  He spent most of the next year recuperating and, although it wasn't his top priority over living, wooing Alisa.  Soon, they were ineparable, and he made plans to carry her back to WestSea with her parents' blessing.  Perhaps Alisa's kind nature can even get Magdar and Callista to put an end to the feud.  Actually, having to live in the same house alone for the year, worried about what could have happened to their brother, calmed their feathers some.  They weren't entirely 'alone'... their father Peter came in for meals, sometimes... but other times one or the other of them had to go down in the mines and find him, feed him, and convince him to sleep once in a while.

Callista had received a message through Rosered from Alvin about what had happened (they talk often about breeding horses) and once they knew it would be a long time before Alex returned, Magdar started helping out more (she was so obsessed with her paintings, but they take wool, which come from the sheep!) and the tension at WestSea was fairly stable when Alex and Alisa returned to start building their home together, arriving back at WestSea in year 52.

Peter Daniels seems a little happier, as well.  The materials he has feverishly (!) mined for the past few years now have a use in building Alex's house, and baby Kathryn was born in year 55, followed by Hogan in 56, Julia (year 58) and finally little Stewart (year 62).  Peter's hands are full, and he has even started to take an interest in finding a husband for Callista, against her wishes really..... but he has heard of a man over in Kriganzy who has a way with horses and is looking to move to the Continent.  He has been sending letters through the network between Oliver and the residents at Amularia / Melitus as Robert Thomas continues to expand his seamap.  In Year 63 Robert discovers bamboo and begins the Bamboo Trading and Mapping Expeditions.  The young man from Kriganzy might come up here yet... 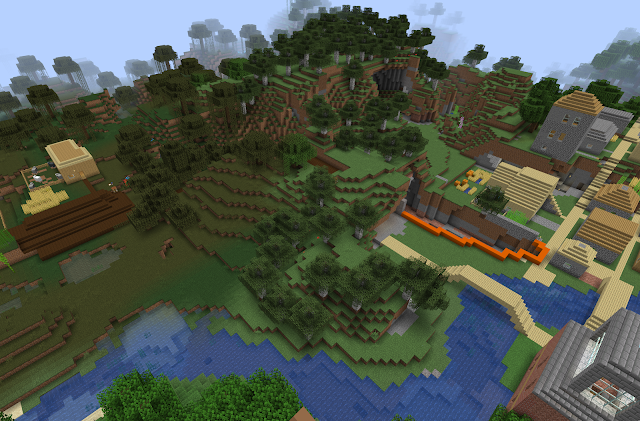 Watch your Step around the Rivertown Gorge...

Alex was beyond lucky to survive at all... that could have been the End for him.

Kallum Allen courted Nessie Jackson while her father was going back and forth between Amularia and Rivertown - they were married in year 46.  He has built a three-story tower at Piper's Cove across from the blacksmith forge.

//Other announcements in Cod Bay

Omri DeAryl (the younger brother) decided to leave the butcher shoppe in Cod Bay to his brother and start his own in neighboring (and almost adjacent) Cambrey with Charles Robinson and Dirk Reynard (a miner from North City).  He made several trips to the Aryl native village and coaxed a girl named Adacia to come and be his wife. Upon her urging, he changed his last name to 'Bevanson' (for his father, Bevan DeAryl, a previous emigrant from that same village but from another family different from Adacia) because 'DeAryl Butcher Shop' gave Adacia chills down her spine - as Aryl is the name of her mountain and her people.  Omri is still operating the shop, but the name change was suitable for him since he did want to set it apart from his brother's business, as well.

Dirk Reynard (miner) married Serena Pippington in year 46, followed by her brother Argent Pippington finally proposing to Wirna Otrio in year 48.  They have built fancy townhomes near the bank.

Harran DeAryl heard quite a bit about Sheila DeCroix from his neighbor (her cousin) Bruce DeCroix, and took a bit of time out from the butcher shoppe to make the journey to Rosered.  Alex Daniels had been through just the year before and Sheila had wanted nothing to do with him.. But... Harran and her hit it off and she moved with him to Cod Bay.  They have built an inn in the same style as the original DeAryl family house and it has both a single and double room for bed and breakfast. 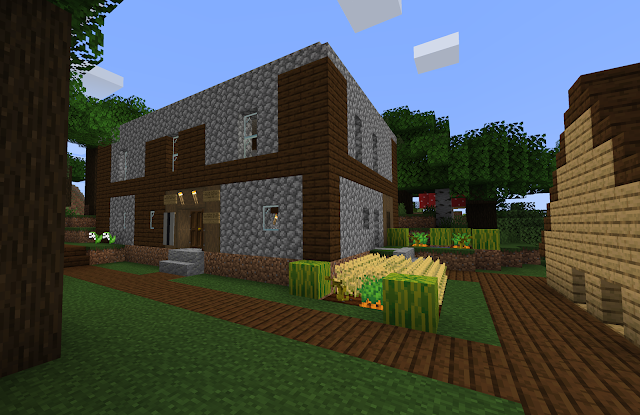 The Cod Bay Inn.  It only took fifty years for someone to build something other than barracks for extra people to stay in?  Well, it's an idea that is going to take off across the world.