It is under contention with McElvaney just how Joseph DeCroix (from the southern colonies) became sheriff of 'Barrington County', the land between WestSea and Vanter - but his signs were up for many years before Rivertown really took notice of it.  It was word from Maisie (McElvaney's daughter), married to Peter Daniels and settled at WestSea, that alerted him to the existence of the place.  This is reminiscient of when McElvaney found out about Benson's Pointe, as well - existing for eight years just at his very elbow beyond Sam Sevier's orchard, and really only becoming a part of trading life when the Daniels and Pippington made their numerous treks to the East Native Village in the fall of year 10 (the year we found Cows).

Word has it that the name 'Rosered' comes from the day Nicholas Long and Joseph Decroix were mining and entered into a cavern not open at all to the sky.  In the middle of the cavern was a single red rose bush, in a small patch of dirt.  Nicholas dug it up (although Joseph thought it was bad luck) and took it to the sunlight above - where it has multiplied into several walls of 'darn thorns'.. but it's growth according to Nicholas means good things for the 'city to come'.  They found a lot of iron after that - survived several Pillager attacks - and went to Rivertown to recruit some of the young adventurous men for mining and protection.

Meanwhile : In WestSea, Peter Daniels and Maisie McElvaney travelled as far away as they thought they could get to start a new life apart from Dan McElvaney's reach.  They captured wild sheep, bred chickens and planted crops.  They discovered a mine shaft rich in string and iron, and began to trade with the natives from Presentation Mountain.  Then, they heard that Nicholas Long and Joseph Decroix had begun to build a city right across the river... and formed a treaty that Rosered would not expand to that side of the river, since the city and the WestSea farm had been founded almost simultaneously of each other.  Also, Decroix met Dan McElvaney in the Rivertown city on a recruitment and when he returned, he was much much more pliant to allowing Maisie and Peter a 'land of their own'... 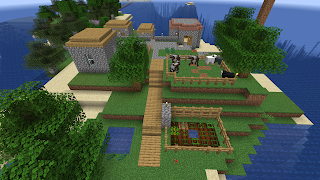 In Year 39, while Tan Vandreas minded the crops and livestock, Martin Thomas and Zade Perkins made a trip back to the mainland.  They traded sweet berries and black wool at WestSea and Rosered, and came back home with a bride for Martin - Syaria Kincaid, the younger sister of Ember (married to Scott North) who had come down to Rosered with the North family entourage from North City (Scott's father, Stanley, the weaver, and Scott's sisters Emily and Sylvia North)  Emily was married to George Claymore, the kilnmaster, who had also come down with them...Anyway, Martin was deeply enamored of Syaria and traded for far too long in the city - long past when Zade wanted to leave, and helped plant and harvest the first sweet berries.  They had already traded to WestSea for the string, which was the biggest reason they had come this far, but now they also traded for lapis, eggs and a pumpkin - all to bring back to their new island home. 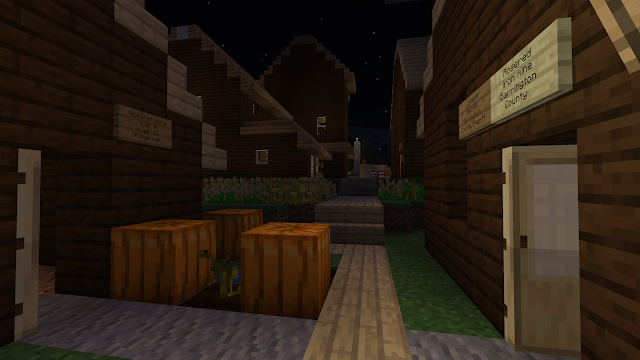 Stanley North (45 at time of arrival in Rosered, year 31)

Nicholas Long (fisherman) year 20, a mountain man from Presentation Mountain (East of Redrose - that's really all he will say...)

Joseph DeCroix (fisherman, miner, sheriff) year 20 (small shack above the mine... did not build his house until year 31, when he married Isla, an immigrant from North City)

Zari Dee (year 21, did not build his house until year 23) - iron miner recruitment

Annette Oster (year 23) - wife from Eastern Native villages, Zari met on a trip over to recruit Craig Roberts in Rivertown

Belinda Knox (year 21) moved with Victor Trent as his wife, younger sister of Sandra Knox (mr. Matthew Parker), emigrants from North City before the Earthquake to Rivertown in year 12

Martin and Syaria went back home and began to build onto their house on Amularia island, expanding it for a family.  Syaria has built a loom and is implementing some of the talents she learned from the North family with weaving banners.  It was two weeks later when Zade returned - and to Martin's utter dismay, with his elder sister Herminda Thomas, of Rivertown.  She had heard about the beehives Martin had found on the nearby island of Melitus, and now, with Martin's third-story roof going on there at Amularia, it left Melitus still open for building.  Zade and Herminda began to build their house there, as well as a land bridge between the two islands.  They have been breeding bees and making new beehives, using the newly invented compost bin (Ravenna, Andy Gordon) to make bonemeal and expand the flower fields on Melitus. 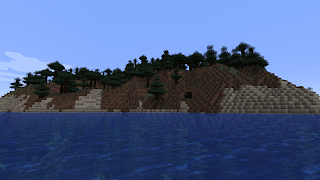 Tan Vandreas is still a bachelor, but he has his eyes set on a native village he has found sourth of Pagossus.  He said he saw a woman with long red hair there that he can't get out of his mind.  Martin and Zade think he has been drinking sweetberry wine and that is the real cause of it, and maybe too many cows mooing in front of windows in the middle of the night.  The cows are multiplying like crazy now on the island - and Zade plans to bring some over to Melitus in exchange for the pigs that have been eating his carrot crop there. 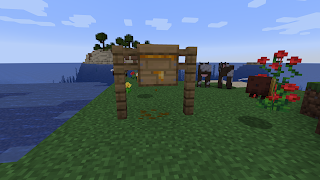 flower fields and beehives between the islands are filling up with bees, island of Melitus looking from island of Amulaira 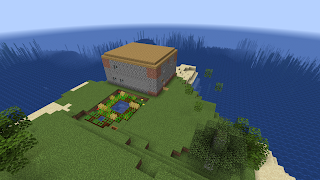 A simple but spacious house on the island of Melitus for Zade and Herminda Perkins, including gardens, pigs and many beehives (not shown)

Martin mentioned a shipwreck they had seen to Tan, who took it upon himself to go investigate, now that the boys were 'back home' and doing their own things in their own households.  He found a treasure map, and an emerald.  With that in hand, he set off to find buried treasure, mostly in hopes that he could then move South of Pagossus and try to impress his red-haired Athena.  To his dismay, though, the shipwreck contained no more than some sickening flesh, coal, paper and a bowl of Suspicious Stew. 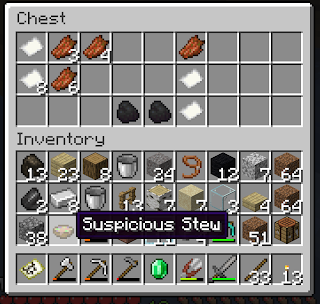 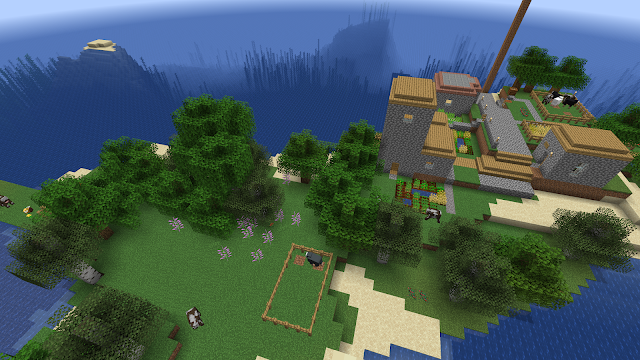 Amularia at the end of Year 40, including the three story house Martin Thomas has made for his new wife Syaria  Zade;s house, up until recently right next to Martin's is now sitting empty as he is moving to Melitus island.

Tan was gone more than six months, and a cursory lookover of Pagossus did not help Zade and Martin discover where he might have went off to.  There was a new spire on the South side of Pagossus, and a matching one on the island even Further South of Pagossus (now known as Kriganzy).  Tan has returned in year 41, ready to bring a trading expedition to the Kriganzy River Village, home of Krissainia, his love, who has not yet agreed to come that far North with him.  He may have to try to make his home on Pagossus itself, as that island is known to them but they have not been further North of it.  The people of the city wear furs and feathers even in what Tan felt was a relatively warm Southern climate.  They are also predominantly tall and thin.  Krissainia is still the only redhead in the city - which makes Tan even more certain that seeing her on that beach that day at Pagossus was a sign of Fate. 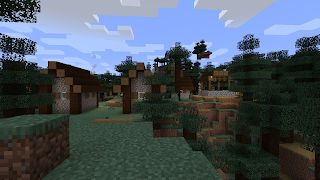 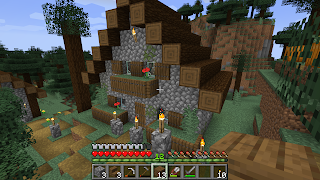 Kriganzy city is much larger than any native village we have recorded.  It is truly a city - even hosting a library.  The population is in excess of twenty individuals, all hard at work farming and working in the forests.  The people there know OF beetroot, but they have never seen it.  It was the first time anybody outside of some old books in North City have ever mentioned it.  The people of Kriganzy had numerous pumpkins, potatoes and sweet berries, even foxes with young in their woods - but their prime concern was did the South have beetroot.  Tan was sad to say we did not - but that he would keep looking for it for them.

A Kriganzy woman, Terezea, she calls herself, has come over from the island in her own rowboat.  She does not speak the language, and that has been a barrier for Tan, as well, in communicating with them and in convincing Krissainia to come over to Amularia.  However, Terezea, a woman with long dark hair and luminous olive eyes, has tried to make her own intentions known  However, there is some sort of disconnect happening on purpose - as she waited in her boat on the other side of the island for Tan to leave - then came and took Syaria by the hand and had her witness a 'trade'.  She carried a nest of feathers into Tan's house and filled it with pumpkin seeds, leaving it directly on his bed.  She then took the white and black woven rug Tan had attempted to give to Krissainia upon his past visit.  Krissainia had not taken it, in fact, she had refused to look at it after he tried to present her with it.  She did not take any objections from Syaria (who happened to have been the one to weave it for Tan) - she rolled it up and stuck it under her arm with a strong intent in her eye she would fight for it.   Syaria definitely doesn't want to fight for it, being ready to have her first child any day now.  Terezea seemed sad that Tan did not return that day.  She laid the rug out in her boat and sat on it, waited nearly until sunset, before rowing back off to Kriganzy with it.  I am sure she wants Tan to follow her - notice her, and perhaps get the 'drift' she is interested and willing to strike up some bargains? 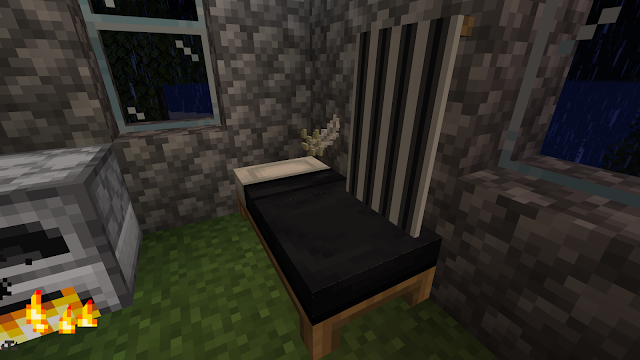 Will Tan Vandreas get the message?

Somebody is more than willing to make their nest here, if he will just open his eyes up and see her.  If Tan takes up the challenge, what would be next?