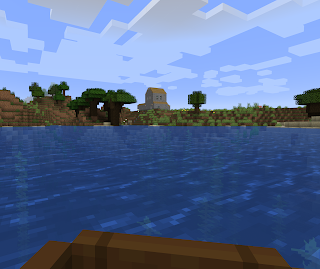 In year 17, Paul Daniels and Gary Pippington went out to the Western Sea from Rivertown, taking their two eldest sons with them - Peter (born -8 North City) and Thaddeus (born year 5, Rivertown).   This happened just before Sam Sevier and Paul Allen went to find the Eastern Sea, in what would become Piper's Cove.  The crew of four found the Western Sea and made a tunnel through the last mountain, and a spire to show where they had been.
However, after the cities began to expand to the East, Piper's Cove in year 19, and Cod Bay in year 19-21, no one paid much attention to expanding to the West.  But Peter Daniels did not forget.  In fact, he could not forget the many islands and coves he saw in the distance from the top of the spire at the Western Sea front.
In year 24, after seeing Niko and Thaddeus move off to the new burgeoning town of Cod Bay, and hearing about his sister Piper's emigration and marriage under mixed-reactions from his parents - Peter tried very hard to woo Maisie McElvaney.  It is not easy to try to court the Founder's daughter right under his nose, even if he is in the bank or having his face stuck in contracts all of the time.  And Peter was pretty sure he could see a gleam for adventure there in Maisie's eyes - especially as she gazed from the third floor of the McElvaney house - off into the distance, in exactly the direction Peter's own thoughts shared. 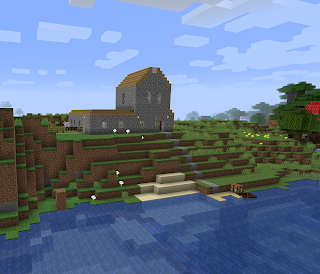 In June of the year, Peter began to sail to the West, having had no real luck with getting permission from Dan McElvaney or an outright expression of interest from his daughter.  One thing he had heard though, was that Dan had been writing to young entrepenurs and businessmen in North City, asking if they would like to move there and marry his daughter.  He heard Maisie talking with Sandra Parker, Rebecca Roberts ,and their daughters up at the Gourmet Food shop.  She definitely did not want to ever marry a stranger just because of his money.  She wanted someone she knew, but there wasn't any chance her father was going to approve of anybody already living in this town!  Peter thought that might be partially right.. partially wrong. 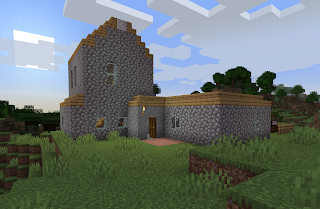 He took a long trip to the Western Sea, and getting in his boat, he aimed to find the absolutely most pretty place he could, without getting lost, that Maisie would fall in love with him, if she didn't fall in love with HIM immediately, maybe she would with the land.  When he saw the cliffs at WestSea, be began to build.  He built a little two room two story cobblestone house, and then returned to Rivertown by sea, and in the darkness outside a Town Meeting, he asked Maisie for her hand, if he could show her a place where she could watch the sun rise and set from her own house, on her own land, far away.  He told her the sun would set over the ocean and rise over their fields, and the children he wanted to have with her would run through the flowers and weave between the birch trees lining cliffs and shores.

It was poetry.  And Maisie packed a slim bag the next morning.  She showed up in the Pippington Glassworks the next morning, seeking Peter, and told him she was ready to go see the place - and maybe stay, depending.  He accepted the terms, and without telling anyone but Gary and Cerina Pippington (who Gary stood there with his mouth open - he did not want to impart the wrath of McElvaney, either.. but ... it was something he had always thought might happen, if the fates had their way...)  Gary fell down on the floor of his shop and laughed until his sides hurt - but only after they had gone, and because in his mind Dan McElvaney did a back flip and pulled his hair out in clumps at the news.  Gary has such an imagination, which makes him a wonderful glassmaker and dyesmith (and the father of five children, himself.

It has had one large renovation, adding three extra large rooms for beds and trunks to the side of the original structure.

Maisie McElvaney quickly became Maisie Daniels, marrying with a cleric from the East Native village presiding.  WestSea is now, in year 31, home to Peter and Maisie Daniels, and their four children.

It is the Western most city as of year 31.  The two waystations between WestSea and Rivertown are 'Barrington County;, a mostly undeveloped area that is under the care of a private caretaker McElvaney has hired on, and Vanter Forge, owned by the Perkins' Construction company and cycled in and out with various users making everything from glass to stone bricks to iron ingots in their blast furnaces burning day and night.  Alan Kenzie has started building a small house out there, and he is set to take over as the permanent resident.