How to get a Minecraft Sheep to an Island : Amularia 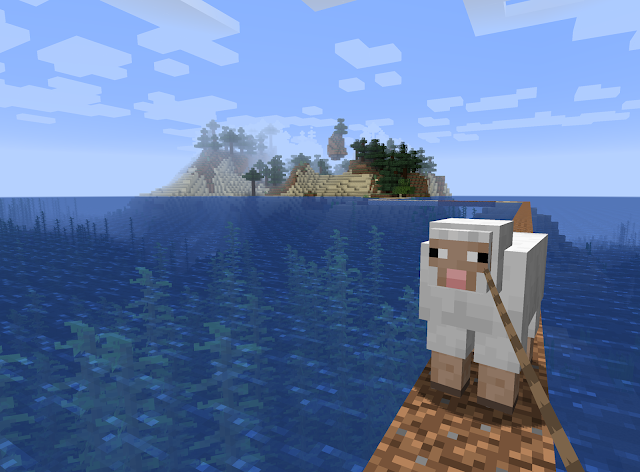 Porter Jackson, after building the school in West Rivertown, was set to find his fame and fortune abroad, like his father the pirate Jack Iyaga before him.  Life on the farm was getting a little crowded, with all of the new buildings they had made for the town, and the birth of a new son, making a full house with his wife and two daughters.  He was only supposed to be gone a few weeks - staking off to the West in a birch boat from the Western Gate, as Mattias Phillips has called the place of his ill-fated Nether World Gate. 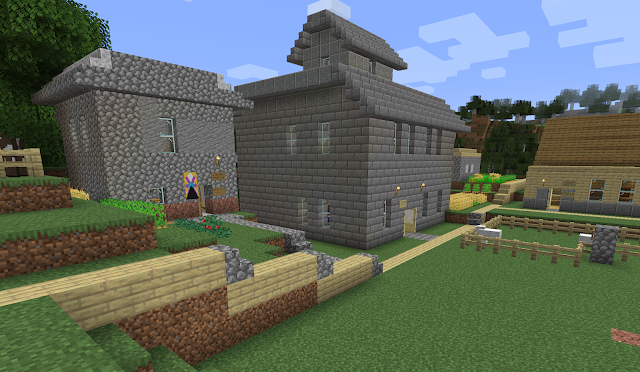 The Porter Thomas school, and the Iyaga Farm 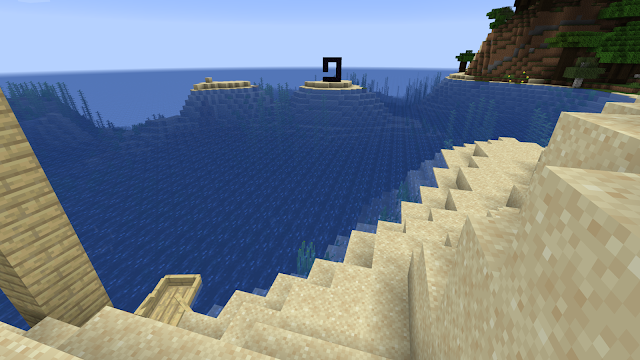 He strove to travel for a day or less - but as is written in the journal : 'Two days at sea headed West - And finally, when you feel like you are about to give up, there you find Amularia.' 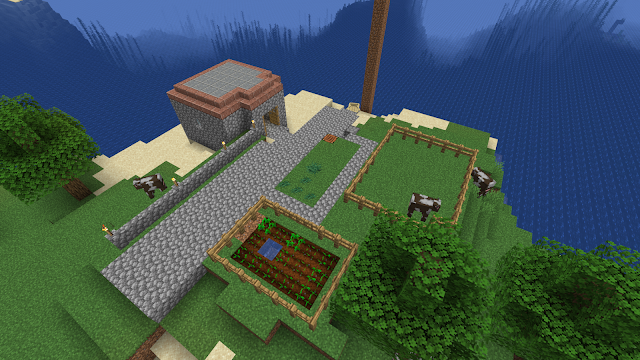 Amularia was an island not entirely unpopulated - but mostly by cows.  The building and streets that were left seemed like they had been abandoned for something more sinister than the Earthquake.  It was the year 39, and a pirate's son knew what he was seeing.  Sure enough, there was a pirate ship wreck on the next island over, which showed no sign of inhabitants at all.  Porter took some risks and discovered both pirate treasure in a sunken ship, and a buried treasure map.  He came back to Amularia a rich man on an island with no people.  But, that was not for long. 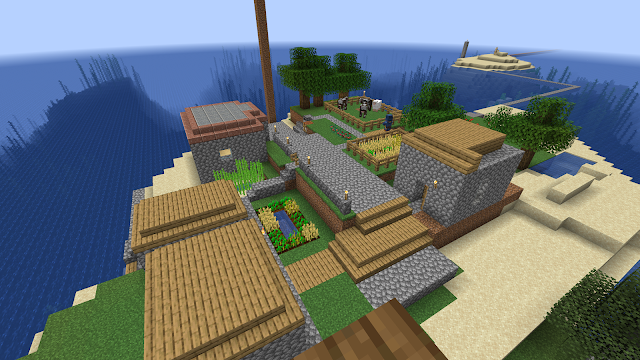 A house for Porter, one for Tan, and bachelor pads for Zade and Martin until they get their farms up and running.  Martin already found a beehive on another very nearby island to the North - and he is trying to figure out how to make some bottles and start to produce honey.

With the scent of emeralds and iron come traders from near and far, and settlers from the mainland, as well.  Porter planted a few crops, and put up lit torches and then headed home to his wife Nanette to put the emeralds and diamonds in the Bank of Rivertown.  He left the iron smelting and came back with Tan Vandreas, Zade Perkins and Martin Thomas.  Porter does not want to move his family here, but Tan has agreed to stay a few years to help the young men get on their feet and collect and breed cows. 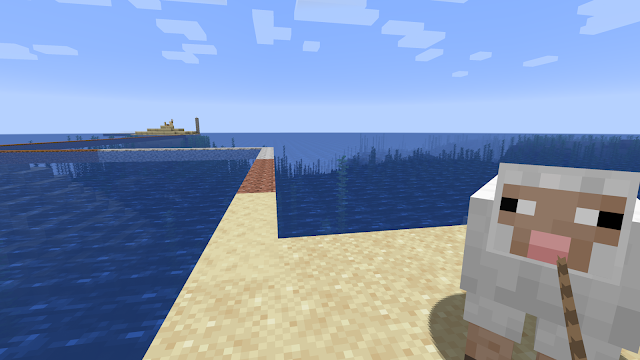 GET THE SHEEP TAN!

But over on the island of Pagossus - the uninhabited land full of the Spruce Trees and holding the remnants of the mysterious shipwreck?  There were  sheep there. Every good colony needs to get sheep or some trade source of wool to be able to build and expand beds and houses.   And, it is so hard to get sheep across the ocean.  But, Tan had a plan... the tan man with the plan.. I guess?

They mined as much hodgepodge stone and dirt as they could and made a zigzagging path from island to island.  And, using a lead they stole in the night from one of the two (TWO!) traders that somehow appeared with their llamas (in the middle of an ocean, what kind of potions are you guys using?) they led the first sheep away from Pagossus and into the cow pens here at Amularia.  They hope to go back at the beginning of the next week and find another - unless the wolves have gotten to them.  That was a big reason to go, even though the road building was hard - the sheep were not safe in their own environment with packs of wolves roaming the Spruce Forests.

Island Colony of Amularia considered officially established in Year 39.  It is located at -1248,64,-35, with Pagossus being located to the SouthEast from there.

Another thing that has come of this trip?  Sweet Berries, found in the forests of Pagossus.  They are spreading faster than the watermelon craze of Cod Bay.  In the end, they may be worth more than the emeralds that Porter found in the shipwreck!  This is quite a good reason to return to running Iyaga Farms, as well as the news that Nanette is expecting another production of their own - 'Iyaga Jackson', born at the end of year 39 and quite a surprise to most everyone.