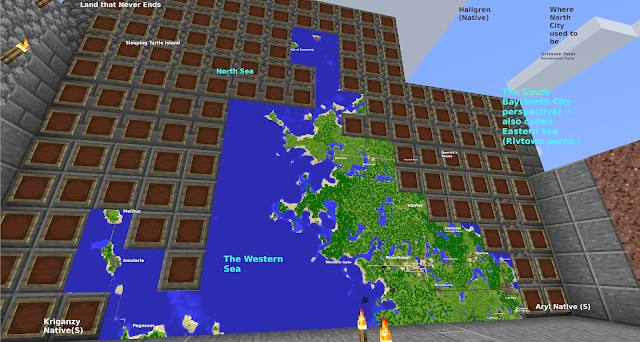 In Year 63 Robert Thomas of Amularia discovered bamboo in a shipwreck in the Land that Never Ends.  He proceeded to take that bamboo cross-country (cross-world!) to Cod Bay, to Steven Pembry at the Cod Bay bank, trading along the way for other iron, paper, leather and redstone.

Each map takes eight pieces of paper and a compass.  Each compass takes four pieces of iron and a precious portion of redstone.  And then there is the feeding and supplying of the journeymakers who take the map out to the section, sometimes in nothing but a boat, and painstakingly ink the map bit by bit until it has been recorded.  However, because the bamboo trade has reached so far- they have been able to send out numerous young people with maps and supplies and say : 'Make history'.  Many of these young people are the great grandchildren of founders and grandchildren of refugees from the Earthquake.  They are ready to make their own marks in the world and will change even this 'Known World' from here on out.

Steven, the clerk at the Cod Bay Bank since it's founding, and clockmaker and mapmaker for the city - provided the rest of the essential materials.  He already had a map of the local area, Rivertown to Cod Bay, but now he moved that map down to the bottom of the wall and began expanding upwards to focus on the North.  He had some help from the DeAryl butchers with the leather for the item frames.  His small project in the Bank upper story suddenly turned into a huge one, requiring expanded walls and the removal of the roof.  And thus, the bamboo trade spurred expanded mapping of the Known World (so far)... and there is more to come.  Abe Hendrick had been playing with maps for a while and had mapped from Hendrick's Pointe to Rivertown and the surrounding land area. (except Vanter)  Robert had his own single map of the ocean areas, but it was so small that Semmerly Island on it was no more than a few dots.

This map wall would be a public service to show everyone exactly what the world looked like, and be able to be kept updated as the years go on. 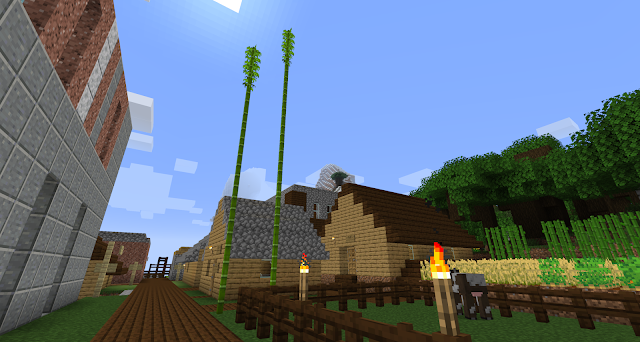 Bamboo growing in Cod Bay, with the roof off of the Cod Bay bank.  Mt. Aryl looms in the background over the roofs of Dennis Danby's house and the Cod Bay School.

They even had to take the roof off the Cod Bay bank to do it.  Andrew Burke (of Ravenna, of Rivertown Perkin's construction roofing fame) is a bit too old to be up on roofs right now, but he was quoted as slapping his knee and sitting down in Danby's house muttering 'They took the roof off the bank - OFF I said.. I remember when they put it there it took years and years to get enough materials to finish it.. and today, they took it OFF... for maps.' 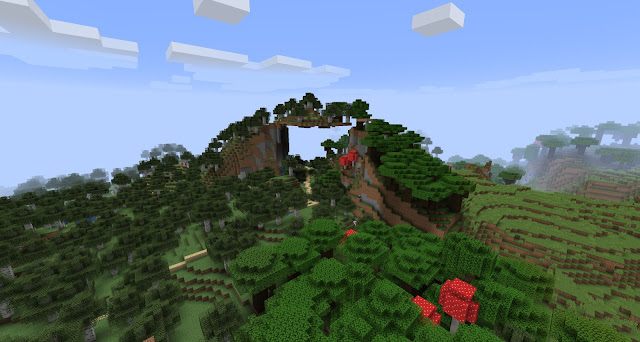 Everybody is wondering who is going to have the guts to climb and map the Vanter Highlands?  It is just to the east of the Vanter Road, and no one, not even Alan Kenzie (the Vanter Forgeworks founder) has been willing to go up there!