A while back I picked up a box of fabric at a garage sale and there were some really great patterns in it, particularily these greens. 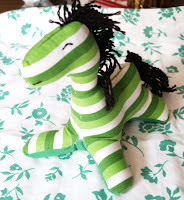 Another little horse in green. 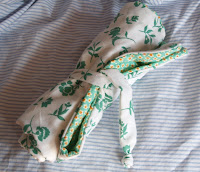 Changing Pad in green flowers. This one turned out best of all three of them.
I might have jumped the gun a little when I said we had _everything_ collected.. not quite. We still have to get the crib here (it's in the mail) and set up, and then the next thing is the changing table, then bottles/pump etc. And of course, there might be something that I've missed on my list that I've yet to realize.

Obsession du Jour already had her changing table set up at 29 weeks... wow, she really was nesting!

We visited our county fair yesterday, which is very small compared to the fairs I'm used to in Minnesota. We saw a guy with a tiny baby raccoon he said he had rescued while on the road last week. It was on a leash and very happy, bouncing around and talking to him, obviously he has a talent! It reminded me of a fat kitten with hand-like paws, so cute! There was also a pet monkey someone else had that was bouncy but only towards his owner, he was shy to everyone else.

Also coming in the mail: a large lot of Agatha Christie books! They're good 'put it down and come back to it' reading, not too complicated and I used to keep one around for when I needed something lighter. Latest reads: a few stories by 'Lewis Padgett' (moniker for a husband/wife writing team) out of one of Mark's anthologies. Mimsy were the Borogroves, The Proud Robot, The Bough Will Break...also slowly going through James Blish's 'The Devils Day'

That horse is really cute!

That horse is so cute!

Dang, I keep getting behind on you. You look way pregnant! Oddly enough. And wow, that copperhead in my house would have FREAKED. ME. OUT. I'm just sayin'...;)

I love the horse!!