It was threatening to thunderstorm tonight so Mark set up a tent in one of the downstairs rooms and lined it with paper to bring DeeDee and her babies inside. After she was settled and comfortable again, he took a few pictures of her and her brood. There are actually EIGHT puppies, one of them a little weak but hanging on. There are three mostly black, three mostly white and two of a grey (merle) colour. 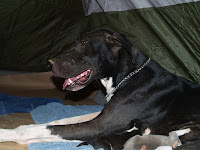 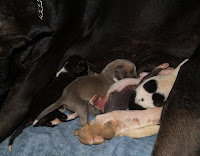 Mark thinks these puppies will be ready to find good homes a little before Christmas. DeeDee is half Great Dane, half Collie (both parents purebred) and we think the puppies were sired by a half-sibling Great Dane who is several years older. We didn't even think she could have puppies, so she was never 'fixed.'

I feel a little guilty about the next announcement, but this is 'Bunny', a female puppy that was given to us in a parking lot last week. The family's dog had twelve puppies and they couldn't keep feeding them. We definitely don't need another dog, with DeeDee giving birth and me pregnant... We were going to try to give this puppy away at the flea market but well.... she's already a GOOD dog. I've taken to her and she has taken to me more than Pixie ever did to either Mark or me... She's already been 'adopted' by Puck and the outside cat, is being watched over by Misha and playing with Pogo.

Bunny and her lizard toy
Just look at those eyes!
She has black spots on her ears and on her lower eyelids, but other than that she is all white with pink ears. She has ridden in the car well (everybody else but Kelba gets sick or can't get their footing) and is starting to line up with the other dogs for 'outside.' 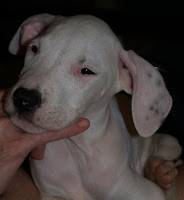 Well seems you is attractin babies there.
Dunno what to say.
Bunny is cute.
Puppies are cute. Grey is different.
Wow a home full of estrogen!

Oh, the cute! Love the one with the two black spots.

Quite a crew you have there! It sounds absolutely crazy.

I always liked the blue merle danes, I like grey animals. (Heck, I'm waiting for my hair to turn that color!)Instead of the streaky grey and brown I've got. But what a housefull. Just like having 12 kids.

She keeps telling me that kids can't be thrown outside when they misbehave, too. So apparently there's still come differences.

I love your pack! Very cute puppies, too!