Is it Friday already? weekly roundup.

Wow, where did this week go? It seems we've either been dead-tired or moving non-stop since we got back, alternating between the two. However, we keep getting things done :)

We're starting to sort through our inventory (new and old) from the trip and redo counts. We bought a variety of cool antique electronics to Ebay as well as the toys we bought to keep. There are lots of switches, cables and connectors to restock on as well.

Last night we made Chex Mix and ate too much of it. Also watched Apocalypto - bloody movie but it had a good plot. It was cool to hear the Mayan language (or an approximation of it) spoken. I did recognize a few words from when I was studying the heiroglyphics like 'balam' - 'jaguar.' On the shortwave radio I was able to get Deutsche Welle, a German radio station. However, I can only get it outside because of our metal roof. Listened to that while weeding the garden a few days ago.

And now the pictures!
On Tuesday we went to the Huntingdon fleamarket and picked up these little peepers for Mark's mom. 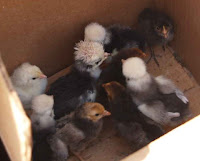 Epic Battle: Kitten (Pogo) vs Puppy (Pixie)
Pogo and Pixie are both growing fast - and when Puck and Mouse get sick and tired of them, they find each other to chew on. 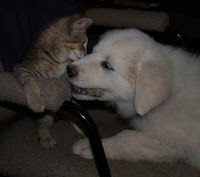 Pixie attempts to eat Pogo's feet - thinking that will give her an advantage. 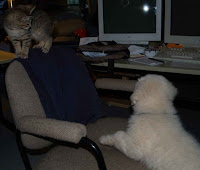 But the kitten is quicker than the polar bear puppy, and escapes. 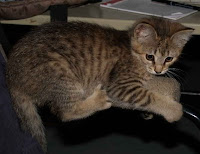 And our winner, Pogo the kitten, for finding the high road.

Kitties do have the extra added adventure of being able to climb! Very cute.

I have never seen a Chinese Topknot chick - how funky!!

Yay for the High Road! And thank heaven for it too.

That hamradio sounds like a lot of fun! One of my Dad's friends used to be really into that when I was a kid.

Those chicks are very cute!

those topknot chicks are so funny!

one polar bear puppy vs. one spidermonkey pogoraffe. too much. =)