We were at the Dayton Hamvention Friday through Sunday. It was my first Hamvention - although Mark has been coming (and selling at the fleamarket) for years. We brought Blaze along and she was a big hit among all the people who had left their dogs at home. We kept getting asked 'Is that a Great Dane?' (or greyhound, depending on if they had seen a Great Dane before). 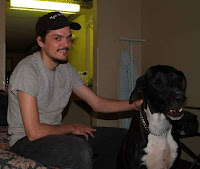 Mark and Blaze at the hotel.
We call this the 'Scooby-Doo' grin. (on Blaze, not Mark!)

Blaze watching the shop.
We had a sign up 'Dog Can't Make Change' after somebody asked -- and it made quite a few people laugh :) 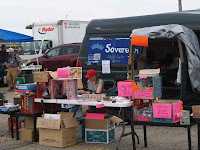 Our flea market was bright and well-marked, or so we were told! 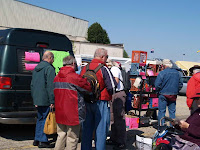 At one point, we got really busy! 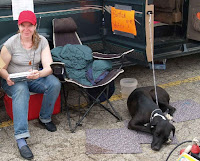 Mark catches me playing with the Sangean ATS-505P shortwave radio we bought.

I had a shortwave as a kid, that didn't work very well - and being around all the different radio equipment made me really interested in finding another one. One nice guy showed me his digital shortwave (A Sony) because I was looking for one in the fleamarket - and apparently they look much different now than when I was a kid! For one thing, mine was analog, and very small - like a transistor radio. On a good reccommendation from one of the ICom people inside the arena, I bought this Sangean and was soon listening to brodcasts in French, Spanish, Chinese and Japanese as well as English broadcasts from foreign countries. Wikipedia refers to this past-time as 'DXing.'

Other fleamarket scores: We haven't unpacked them yet, but Mark scored a few electronic hobby toys from 'the golden age.' We had them out on our table to see what other people thought, and they really got a lot of attention. We didn't want to sell some of them though - including a miniature robotic arm and a 200 project electronic wiring kit. Mark found a full set of 'Dr. Dobb's Journal of Computer Calisthenics and Orthodontia' volumes and a complete metal train railroad kit as well.

Some notable visitors to our booth...

We told this man he could have this HEAVY power supply for $5.00 if he could pick it up... and we could photograph him doing it for the blog. He was a really good sport!

This man showed us his 'keyboard experience,' a Blue Man Group contraption of strange design. 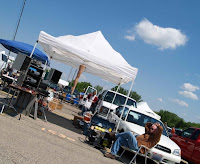 Some fleamarket booths had strange decorations...(see above) more fleamarket pictures below... 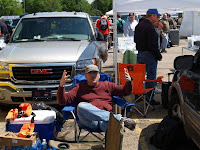 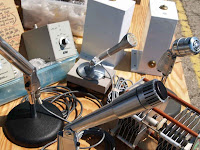 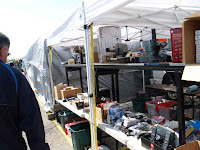 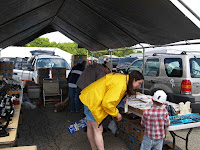 We took some video as well, although that takes a while to convert and pull off, but it's on the way!

All the animals were fine and happy to see us home. I think Mouse taught Pogo to hunt, as her pounce has gotten much more accurate and deadly! Pogo was sleeping between us again this morning purring and saying 'All is right with the world again.'

I love seeing your flea market pictures! It looks like you had a lot of fun.

Love the flea market photos - especially since I'll never again see one irl - they give me the willies. ;)

oboy oboy oboy i am dying with envy, i used to build all sorts of Heathkit and Dynaco electronic kits! i wish i'd gone to Dayton!!

Wow - that looked like a great weekend. We have a shortwave radio which is fantastic :)

what fun, what fun. i hope y'all made out like bandits.