Kriganzy is a 'nation to the Southwest' in the McElvaney Enterprises world.. and it has several native style elements that are their own, although the children and grandchildren that have moved throughout the world have been adapting these features into other places.

The original 'nation' of Kriganzy is a natural Minecraft spawn village in a spruce forest going up a mountain but also near a river plain teeming with fish, horses and sheep.  But, I imagine a bit more, and with the population expanding, they are spreading down closer to the river and their factions and/or clans are starting to break off and have conflicts. 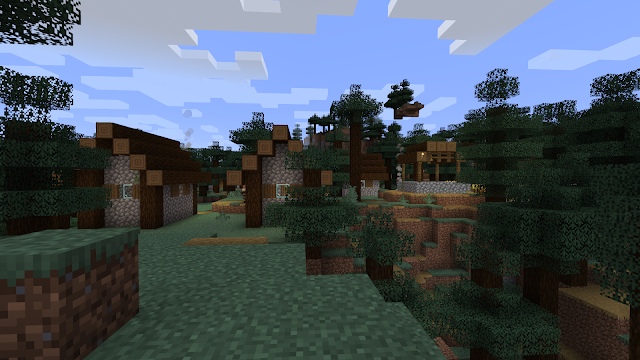 So, in our story, some of the Kriganzy natives have went out into the rest of the Known World.  Their emigration started a bit after Tan Vandreas tried to steal his wife from here - a red-haired girl named Krissainia, when she was already betrothed to a Leader's son...  There were some language-barrier problems at the time... and tempers were raised with issues never really resolved.  From then on, well, things have only gotten more fraught and disputed even inside the clans.  The clans are disagreeing about many things, but especially incidents involving Outsiders.

In our history, Terezea protected Tan and the other Amularia islanders from being killed, and made a sort of uneasy peace, at least for Amularia.  She convinced Tan to marry her, and to leave the rest of Kriganzy alone to stop the tensions his meddling had caused.  Terezea turned into a sort of ambassador between her people and our Rivertown descendants...

Also, Terezea is one of the few in Kriganzy that possess a special talent of waterbreathing - which is hereditary but not to every child.  She has passed her ability along to her son Tanji.  Only a few other people know about this ability, mostly on Amularia.  It is not known how Marika Otrio seems to know of it, but it is the reason she has appointed him leader of the Western branch of the Expedition to the North City Remnants.   Tanji does not agree with his mother's use of the talent to obtain potentially dangerous artifacts from under the Sea, as he has seen the sickness some of these artifacts can bring.  It is possible her bringing some of these artifacts to the Sorcerors of the Eagle Clan of Kriganzy has caused some of their troubles, as well.

Within the factions of Kriganzy, individuals have been leaving as well, many of them expert horsemen.   Mavic Rigginson moved to South of Rivertown, Hawk Riggins (relation?) moved to Whitmoor, and Terezea's sons Rygo and Rega Vandreas are helping Garan Eastham build and defend Palima Castle.  They have married the daughters of the Fish Clan, located along the river bank, and Dagan Weller and Marhel Arwen have moved into the territories to live near their sisters and help protect the new community.  Palima is located in the the valley beyond Kriganzy and before reaching the plains city of Vaya.  Vaya, (home to Arturo and Carmide Aristo, and their warrior sister Sofia, who married Kevan Thomas) has not quite explained yet what reasons they have to fear invasion, or their full past history with Kriganzy. 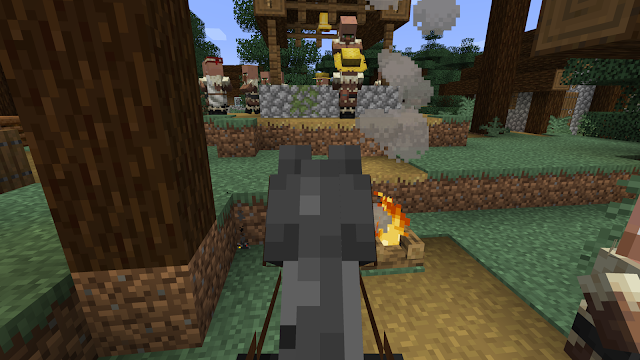 In the actual Kriganzy village, just TEEMING with villagers doing some odd sort of gathering up around the central bell as Rob Riggins (Hawk Riggins' son, and scout for Palima) rides a horse through the village in disguise
Designing the Kriganzy House

They are fairly small but pack a lot of utility into every little bit of space.  The basic pattern for a 'Kriganzy' style house is four corner pillars, usually logs, that are topped with a stair-step, then log crossbeams for the first layer of the roof.  There is a front door and a back or side door, and each of them have 'patios' in front of them made of stone and/or gravel.

There is almost always some sort of center column support, and the log crossbeams range in size from 2 log-lengths to 6 or 7, on average.  If there is stone used in the roof, it can only be directly above a column or within the 8 squares around it as if supported by the column.  The windows are glass and most often do not have stone above them, only wood planks.

Polished andesite, granite or diorite is used for the central columns, and the stove is fire-proofed sometimes into the central column, sometimes just with stone of some sort all around it including the walls wherever it ends up.  The floor inside the back and front door is stone for at least that block, and always stone underneath the doorframe.

The houses will have a table and chairs, crafting table, chest, stove furnace and at least two bedrooms but most of the time three with separate walls and doors.  Each bedroom will have enough space hopefully for a chest and some carpets beside each bed.  Often, colored banners with no pattern on them will be hung inside the house for warmth, just not near the furnace. 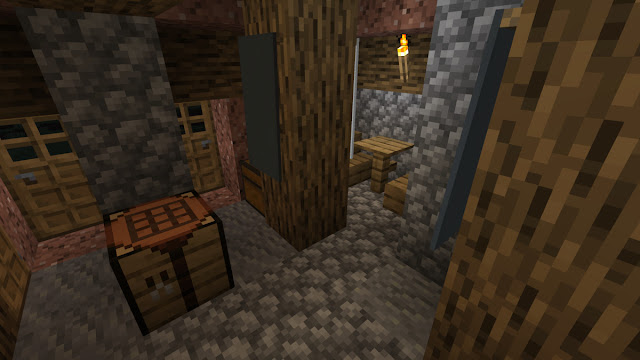 Banners hung up for warmth

Many of the houses will have an exterior porch with at least one chair and a small diorite or polished andesite framed water source.  Why?  Not sure.. maybe for the garden that will be nearby or animals?  It's there. 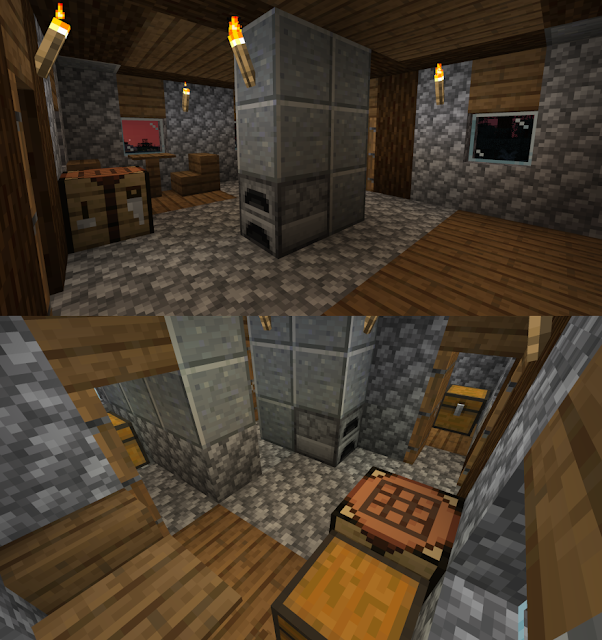 Inside of the same house before and after adding the interior bedroom walls. 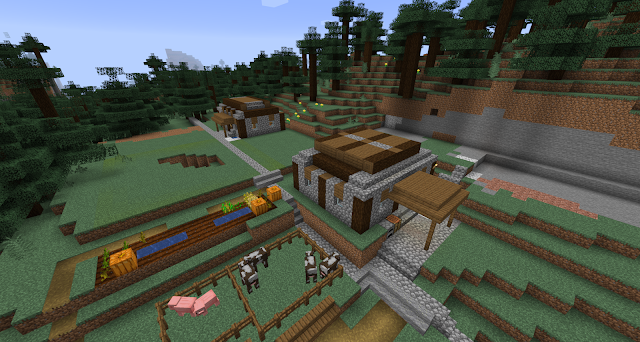 Although the same general pattern is used for each house in the village, each one will turn out just slightly different due to the size and materials that were on hand during the build. 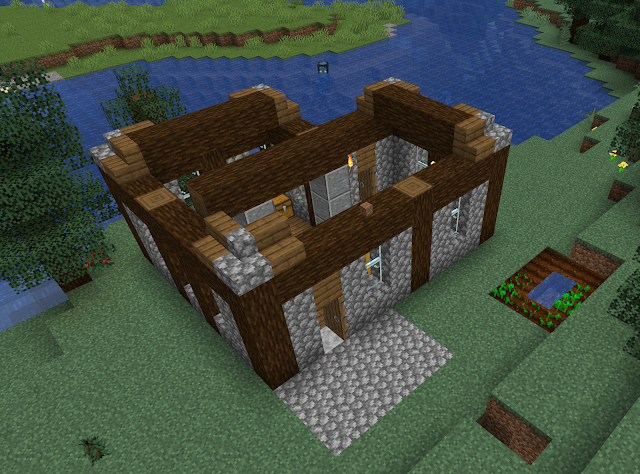 A sort of hybrid Kriganzy with log beams directly on top of the walls and a square room built off the back.  Not every style rule is followed in these 'way outside the territory' homes, but the main elements are there, mixed with some new, as happens when people move around to new places. 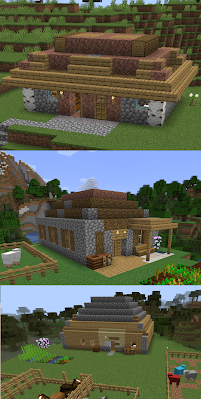 Three of the 'Kriganzy-style' houses that residents have built in different cities throughout the Known World.. following a basic style pattern with whatever native elements were on hand.  top to bottom : Marhel Arwen at Carmide Station south of Whitmoor, Tanji Vandreas at Southerland and Mavic Rigginson at Riggins Ranch, south of Rivertown.
Posted by RheLynn at 3:05 PM