--there is a lot going on at Quarterpoint, Whitmoor and Palima Castle.. but tying up a few loose ends 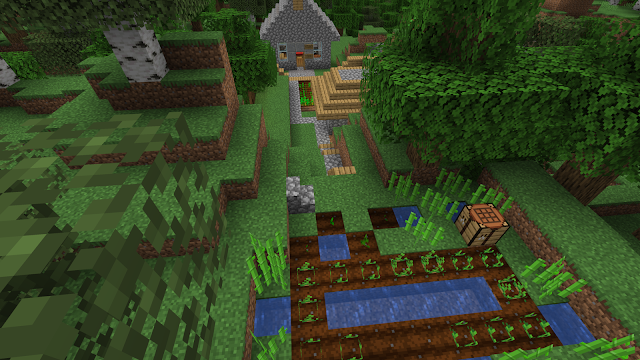 Paulie Garvey was supposed to go and visit his sister down at Quarterpoint, where she had travelled to marry Erik Eastham.  However, for some reason when he packed his bag that morning his feet did not want to go that direction.  He found himself veering off towards Rivertown, then to Vanter.  When he was in Vanter he looked up at a hill and decided to climb it.  He got to the top and there was Wyrik Dee's house at Warren Dells.  Paulie felt a great peace at this place - like he could sit on this hill forever, and just watch life going on around him.  He visited Wyrik and his wife Marta, living there with their young daughter Lela.  They didn't see any reason he couldn't tuck a farm in there, grow trees and a potato or two, and help them out with the livestock and farm if needed.  That sounded just perfect to Paulie. 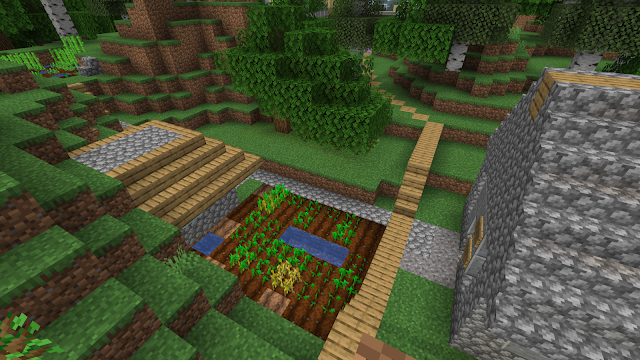 Paulie lent a hand in Wyrik's mine, as well, collecting stone to build himself a simple little house and potting shed.  He made a bit of garden and an animal pen.  Up on the hill he planted more oak trees and made a place to sit and watch his gardens grow.

In Year 65 his garden drew the attention of another Vanter resident, Etra Dee.  She was doing crop science on sugarcane all over the area, and measuring the amount of wheat seed produced per crop versus the other harvests nearby.  She had taken her information on the slow crop growth in the area back to Marika Otrio at the School in Rivertown.

While going to Rosered with her mother Risa, a weaver, and to Warren Dells to see her aunt Marta, also a weaver, Etra became more and more interested in the simple but out-of-the-ordinary gardening style Paulie employed.  His plots were small, but he got the maximum amount of produce out of them.

Although no one could call his hill an 'orchard', he chopped down trees and sold the apples in both towns, and then made fences and other useful items to trade as well.  Every sapling he cut down he planted again, if not on his own plot somewhere nearby in the forest so he could watch it grow.  He was almost always outside, peaceful, working in his garden or crafting pots in his little furnace shed.  There was hardly a day in the sun Paulie was not somehow employed outside with his hands in the soil or with a neighbor at some project nearby.

Paulie had a very hard time trying to gather wild sheep and cows for his little homestead.  There are very few left in the wild, at least near Rosered and Vanter.  Paulie found himself several days wandering out too close to dark and having to fight monsters to get back to shelter.  He boarded with Kirk Trent in Rosered and spent a day helping Kyle Jackson at Volens Farm in exchange for a place to sleep and a meal for the road.  Eventually, Paulie was able to find a breeding pair of sheep to provide wool for his household.  He had to climb a mountain near Vanter to get one of them, but when he looked up at that ledge he thought to himself: 'Well, he won't be happy up there, either - just fall off and die.. so I guess it's worth a try.'   He climbed the ledge, brought the sheep down, and walked it back home with him.

In Year 66 Etra came and sat down in Paulie's garden and he sat down beside her and proposed.  He could not think of sitting in that garden again and not seeing her head of black long curls bent over a book of figures, or her clear eyes looking at the seedlings reaching for the sun.  Not a single soul in Vanter or Rosered hadn't seen it coming - and it was celebrated simply and happily.

Etra is teaching school at Rosered, and continues to send information to Marika.  In Year 69, there will be a call for scientists to head North and Dalton Otrio must select his team to help study the crop and growth problems that are at the root of the Danger in the North. 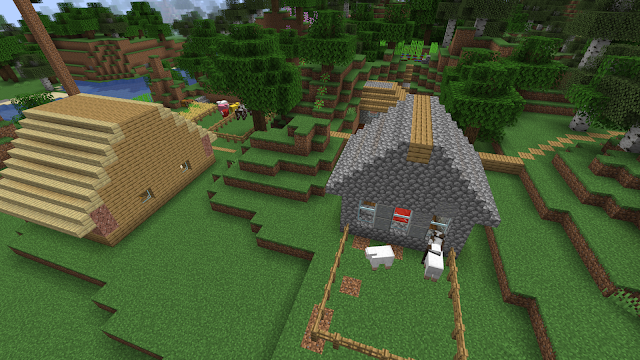