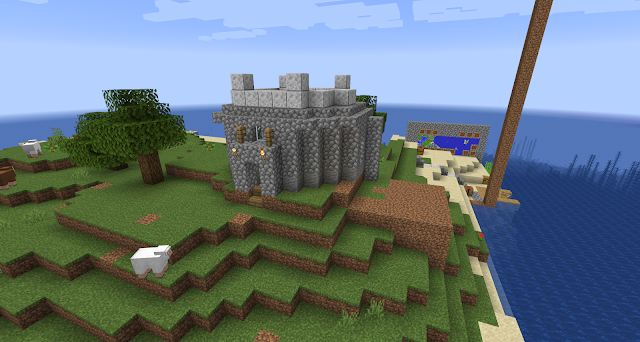 survival house, built to survive monsters.. and a pad of dirt set to begin an expansion for more rooms

Kail Daniels ran off with his second cousin, Stacia Allen, from Piper's Cove.  He stayed a little bit with Christopher Orak, and another cousin Marybelle Allen, at Sandy Bay northeast of Ravenna.  The couple stayed with them a few days, to ease Marybelle's mind, and also heard about the strange occurrence with Ulma DeCroix of Midlands.  Then, Kail and Stacia made their way East, guided by a set of maps Christopher had copied for them.  Kail was actually trying to find a certain island he had been told about - the 'Isle of Horses', which wasn't on the maps.  He had heard from Talyn Orak, Christopher's brother from Cod Bay, that Jamie North had retreated there some ten years ago.  Kail wanted to ask him about the strange creatures Talyn had reported seeing around these shores.

He couldn't find the island - so he settled down with Stacia on this island, instead, which had some cows, a few sheep and enough potential for growth.  He built a simple survival house and began putting up a map wall with redstone from Christopher's stash and iron and sugarcane he produced on the island.  He put up the seven maps he copied from the Orak house and then began to map the area around the island, which he named Stratus Island.

After a bit, he expanded the house to gain a few more rooms, a nice kitchen area and a room for guests or children above it.  That was much more than they needed now.. so the next task was to plant and replant trees, plant crops and breed the animals to furnish the house and provide trade goods. 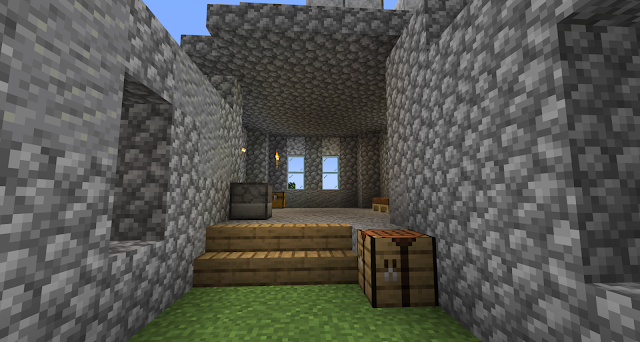 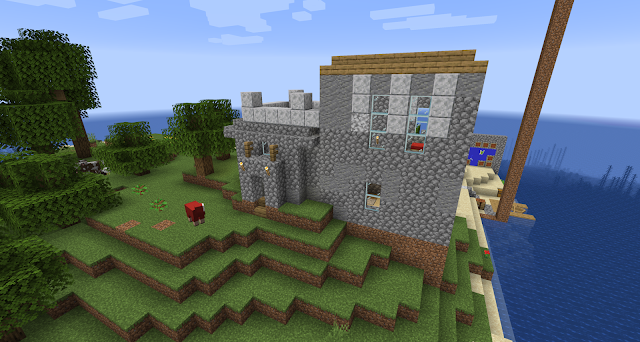 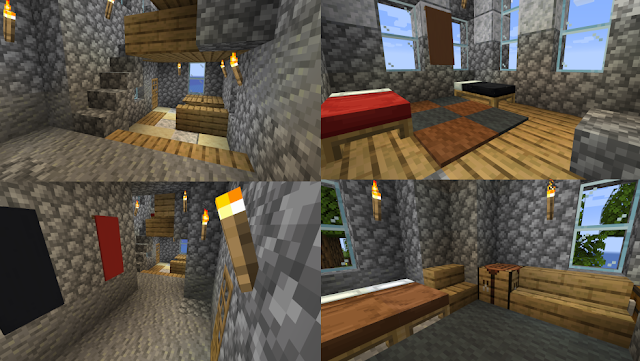 rooms inside the expanded house

At one point he was mapping north and he saw bees near the shoreline.  What were bees doing this far out in the ocean?  He went a little further north and found the Isle of Horses - just a bit further North than he had ever expected to look.  Jamie North had been trading with a Wandering Trader, and met him on the shoreline.  'That Trader said there was a family living over there - thought you'd come along any day now.'  Jamie still isn't that interested in meeting people, and has been living the past ten years out here making only scant trips to the East Pirate Shores village in the South to trade goods.  Kail reported to Christopher:  'He has the beehives of a Robinson - honey everywhere, and you'd think it was a flower island with all the bone meal from crops he has spread out.' 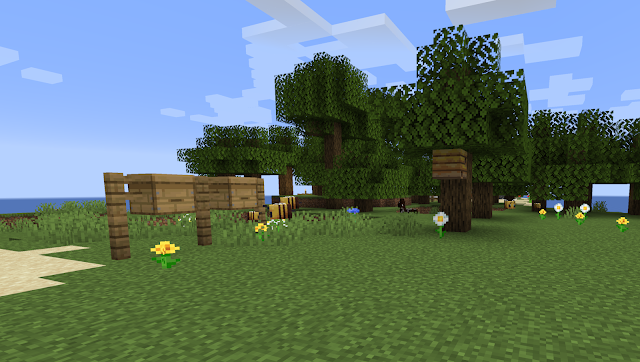 beehives on the Isle of Horses, directly northwest of Stratus
Jamie North was living here quite happy for about ten years - while making contact with a village and a strange visitor to the East. 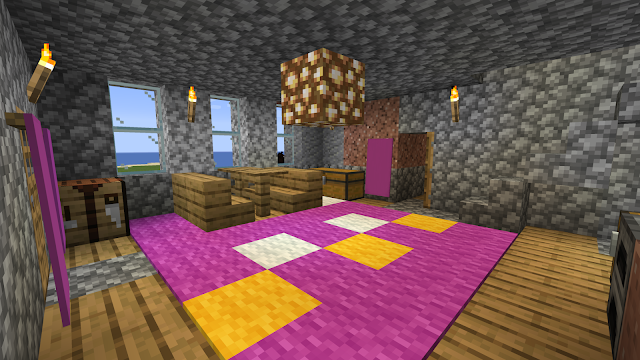 Jamie had found emeralds and golden apples in a chest of buried treasure.  He bought a 'disco ball' glowstone cube from the Trader and decorated his house up. 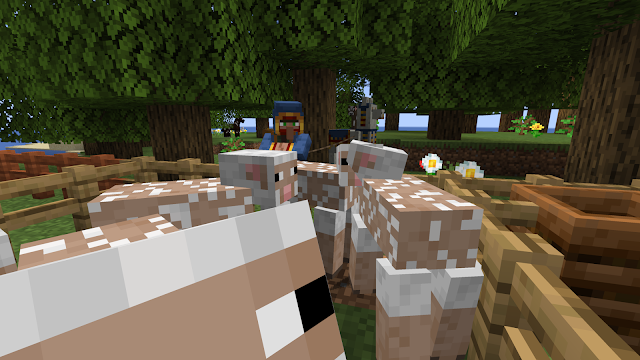 the wandering trader visited during sheepshearing time
Jamie seems to tolerate Kail well enough, because he can see how much work he has put into his new home and understands wanting to be out in a place of your own.  The Oraks are almost a full day's sailing away to the West.  And in between them all.. the remnants of North City, Brandywine and Griessen Farms.   It was only a matter of time before more people began moving back to the north, Jamie thinks... and their islands are close enough that if one of them was in trouble, the other one could come to help.  This will actually work out quite well for Jamie - he can get Kail, who loves to sail, to trade things for him.  Then he can stay home in his mine and gardens much more without having to worry about the outside world.  At least - that is his plan (it won't really turn out that way)...  He was glad to hear his sister, Marta, had settled down (surprised it was with Wyrik!) and a little saddened that so many have left Rosered as he did for other places.  'Well, it didn't quite feel right anymore, hadn't for so many years - I am not surprised by that, at all.'
When Kail asked him about the creatures, Jamie got very quiet.  'Well... I don't go there often but there is a place even further NorthEast of here - you can see the lights sometimes when you are out on the water... There is a desert village there, named Sunvale, almost married a girl there one day...  But there is someone else there, too - nearby.  Strangest thing I'd ever seen, glowing green and purple things around there that gave me the willies.
I don't know what possessed me, as I'm not one for conversation much... but I took my boat right up to the island and said 'Hello.'  I sat down by the water and talked with the owner for a while - he was ... well.. I'd say you could pick him out in a crowd pretty easy, very unique.  Big ears.  Furry.  Lots of Teeth.  But friendly, as much as I am... we talked about humans, mostly, shared some views... should go back there make sure he's still doing okay, pop in see if Aliyah is still there, too.'   Kail nodded along.. this wasn't quite what he had expected to hear.  But he made a note to expand his mapping efforts at least until he located the village Jamie spoke about.  Big Ears?  Lots of Teeth?

Kail and Christopher are completing the maps of the North area, bit by bit - to help with the Expedition, which should be along in the next year or so.  Zachariah Griessen is helping to do the maps near to Hallgren, north of the Griessen Farm he was born at and moved away from.  Marybelle has written to Kallum in Piper's Cove (Stacia's father), that she is safe and happy but has not divulged the location of the island.

Kallum has probably already guessed where it is.  He might go find it before too long, as he has been doing the mapping around Cod Bay and the shores West of Aryl for a while now.  Charles Robinson has also given him some tasks to do training Liam Erikson at Quarterpoint.  Kallum wasn't too happy about this because he doesn't really have his 'land legs'.. but Charles made him feel better by pointing out the Long River route straight up to Quarterpoint, and suggesting maps could be made along the way.    Kallum is to combine his efforts with Luna Bevanson of Cambrey and even Kevan Thomas as far south as Whitmoor, to see if they can share any information and keep things updated as more and more families expand territory, including families from the SouthEast Pirate Shores, the Aryl village and the southern village of Vaya. 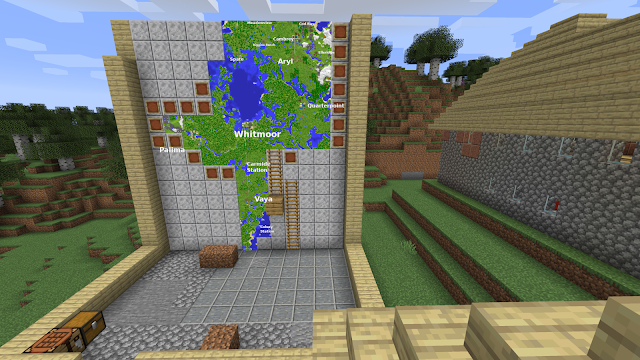 Kevan Thomas' map wall at Whitmoor, his work with Carmide Aristo and also joining with Luna and her father Omri's work at Cambrey and South from there to the new territories expanding.

There is a big overlap area now between the map wall at Whitmoor, the 'failed map of the South' at Cambrey and the beginning map at Palima Castle once this has all been shared.  This kind of reconnaissance will prove invaluable if any of these positions are attacked and parties are sent to help defend. 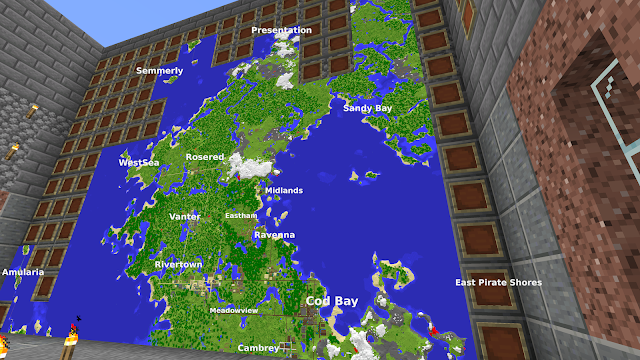 Steven Pembry began this project in the Bank of Cod Bay, but it only centers on Cod Bay and North.. to find the remnants of North City.  Kallum Allen at Piper's Cove (which is tiny but just north of Cod Bay) has been helping map the sea and Christopher Orak has helped in mapping the North, now assisted by Kail Daniels.  Robert Thomas of Amularia has a much wider sea map of the West, but it is so small it can hardly be read.  He has finally been reined in by Tanji and will be coming with him to the North.

The map wall at the Bank at Cod Bay is almost full - and has nowhere to expand.  Will there need to be an even larger Great Map project started somewhere?  Will there be any time for such pursuits anyway.. year 70 is nearly upon us, and the team at Ravenna has been collecting their supplies. The team at Cod Bay has made a loose date to meet - since many of their group live at different places along the shoreline.  The Northern group is falling together despite themselves... drawn together by important forces at work.

Dalton Otrio, Nathan Trent, Xavier Reynard, Paulie and Etra Garvey, Thomas and Frannie Claymore, Talyn Orak, Edward Perkins and a creature that calls herself Ender along with several members of her tribe.