A bit here is condensed from the Vanter Forgeworks and Bram Trent stories...
Rosered's younger generation had mostly survived the Fever, with the exceptions of Hiram North and Timothy Claymore.  During the next ten to twenty years the survivors began mostly to move outwards and away from the source, closing up the mines of Rosered and working instead in the mountains near Presentation or at WestSea with the Daniels clan.

Darren Kincaid moved to Midland, as did Wanda DeCroix (in a separate expedition that happened to join up).  Bram Trent went entirely to Cod Bay, and settled there, marrying a DeAryl girl.   His brother Kirk was soundly claimed by Talya Wright, a girl from the Presentation Mountains, and related to both Nicholas Long (deceased in the Fever) and Abe Hendricks' new wife, Tamiyah.  Kirk built a nice little house on the West field of Rosered (remembering the rule to not build over the river to WestSea), and moved his mother in there.  He stayed in his childhood home, and his mother Belinda (Knox) was quite happy with the new wood and thick carpets.

Sheila DeCroix married Bram's brother-in-law, Harran DeAryl, whom she was introduced to by her cousin Bruce in Cod Bay.

Jorin Dee and Thomas Claymore both moved to Vanter, Jorin first, to marry Alan Kenzie's daughter Risa, then Thomas to work as kilnmaster there.  Thomas married Frannie Carlyle, niece of Adam Carlyle, who has had a love/hate relationship with Alan Kenzie since they both ended up moving into Vanter at about the same time back in the 20s.  Thomas helped Adam build the guildhouse and inn at Vanter, and Frannie built the railroad all the way to Rivertown.  Alan begrudgingly agreed that all of Adam's crazy ideas were good for the town, and settled down to running the post office, taking more forge orders on the railroad line and playing with his grandchildren.

And now, on with the new bits : 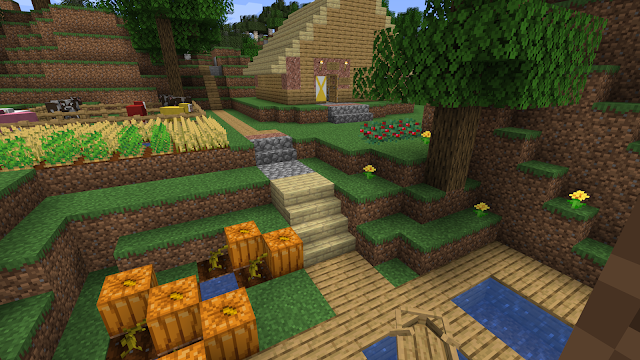 Warren Dells, between Vanter and Rosered, home of Wyrik Dee and his wife Marta 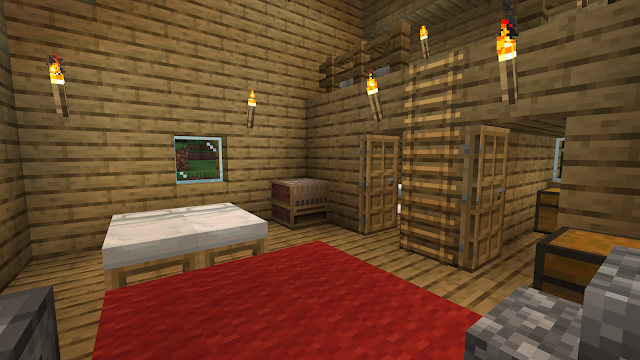 the inside of Warren Dells

Wyrik Dee, Jorin's little brother, moved across the river from Rosered closer to his brother's house in Vanter.  He felt like this place, tucked in between half a dozen tiny little hills, would be a good place to live.  He had been trying to get the eye of Magdar Daniels for years - but she only has time for her paintings, and occasionally, her sister Callista's sheep that provide the wool.  Wyrik was a clumsy homesteader - tried and failed over and over again to keep his fences up and build a little house.  He was almost passable at anything he tried - almost -  but still managed to forget important details or leave things just one knot untied...

He came back to his farm one day to find Marta North, of Rosered, Jamie North's little sister, shoring things up.  Wyrik scratched his head at this thought.  Marta had always been Jamie's little sister, a little plain-looking, and fairly quiet.  She had been quite sick with the Fever, but had recovered.  Wyrik, on the other hand, had been hardly sick at all.  The Fever had been another reason Wyrik had not really looked Marta's way, despite the difference in their ages.  Magdar had the Fever as well - all the Daniels had.  Magdar's mother, Maisie (McElvaney) Daniels had died of it, but everyone else had survived.  Marta probably would not have survived if Dr.Whitacre from Ravenna had not arrived with the Medical Expedition.

Over the course of the next few weeks Wyrik took a look at the things Marta had fixed.  He began to notice some other things he had been trying to accomplish, like a bed for pumpkins, were also corrected when he returned from expeditions in the forest.  Now there was room for the pumpkins to grow, where before they had not been producing because there was no space for them to grow into.  Wyrik scratched his head again and thought, well then - I had better shape up and fix this one thing right!

He traded with his brother Jorin for some string, and made a loom to put in his house.  He knew Marta's grandfather, Stanley North, had been a great weaver.  He took time and care with this, thinking about Marta using the loom to make banners for years to come.  He had Jorin and Risa (also a weaver) double check everything was working correctly.  That was the cinch.  Wyrik waited for Marta to see the loom, and then asked her if she would marry him.  He had to confirm with her father, Scott North, across the way in Rosered.  Scott knew Marta had been visiting the farm, although he wasn't entirely sure of the purpose, and was actually quite relieved at Wyrik's proposal.  Now Wyrik and Marta have built a dock and a footpath from Vanter to their farm, Warren Dells, and all the way to Rosered from there. 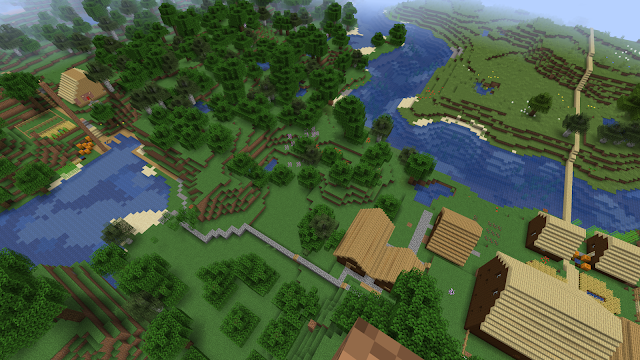 The pathway between Warren Dells and Rosered.  Another pathway goes to Vanter South from Warren Dells, entirely bypassing the old birch road (which was such a longer route anyway)

James and Samuel Roberts took off to the North from Semmerly Island in a ship, to see if they could find any native villages in the lands there.  Oliver Daniels and his son Kail had done some exploring there, but had found nothing of more interest than a flower island and spruce trees.  James wanted to turn back, but Samuel wanted to 'row until my arms fall off'.  And, they did.  James rowed and rowed and rowed until his arms nearly did fall off - and then they found land, and walked and walked and walked until he was sure his legs would fall off, as well.  And then, what they found was truly amazing. 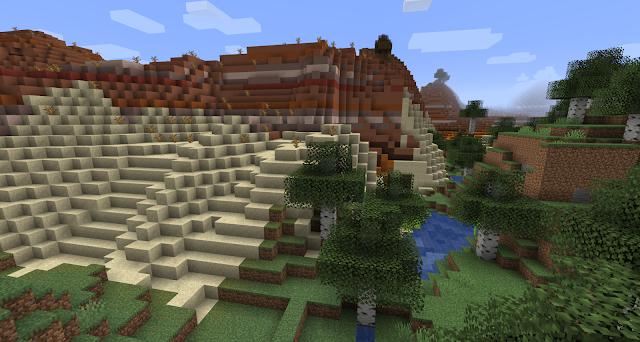 A desert mesa biome that stretched for miles, with multicolored terracotta the likes the Roberts brothers had never seen before in their lives. 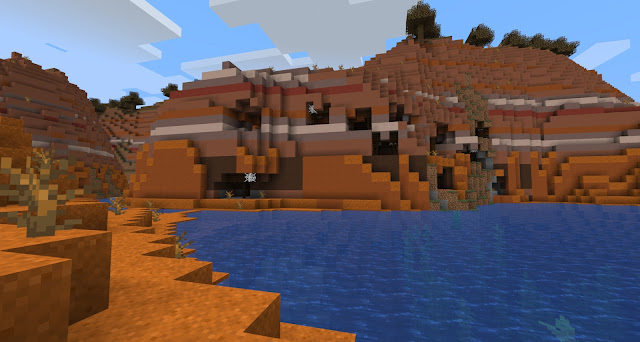 They also found a hill riddled with mineshafts, yielding string, gold and rare treasures in chests hidden throughout.  Their food supply was running low, and the desert is no place to live by yourself - so they began tracing backwards upon their path, having made Astronomical Sightings to know where to return to at a later date.

Then Samuel found what he was really looking for.  Gold and rare treasure is one thing, but Samuel had really been wanting to find new people, to live and trade with, far away from Rosered.  James did not quite share this goal, but he was glad to see the streets and farms of Oorland.  Samuel hit it off right away, found them a place to stay and started communicating in gestures and showing the townsfolk what he had found in the mines.  James pulled brown terracotta he had mined out of his pack and asked a small child at the blacksmith shop if they could fire it there.  By the time his terracotta was cooking, Samuel was dancing with a girl, Shanna, and James was pretty sure it was going to be terrible work to ever drag him away.  By morning Samuel had gotten married and moved into a house with Shanna, and did not seem one bit unhappy about it. 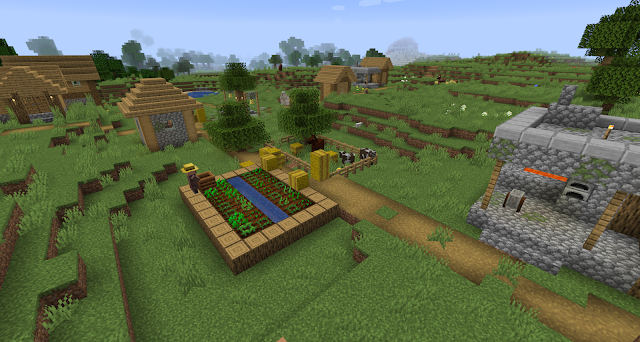 Oorland, in the far Northwest, home of Samuel Roberts in Year 52

James said his goodbye to Samuel, who truly did not want to leave this new vibrant place.  As James was leaving the village, a native girl that had been hanging back from all of the others tugged on his jerkin sleeve.  She spoke his language, and asked him if he was really going away from this place?  James was very surprised by this.  He had thought this girl was hanging back because she was scared of him and Sam.  But the girl, Camilla, explained that her father had moved them there many years ago to be close to the mesa biome, but then died in a terrible accident.

Her mother and her lived on the outskirts of Oorland in the swamp, in a poor wooden hut.  The residents of the village had never accepted them and called her mother a witch.  Now, Camilla wanted to escape and get back to a place where people spoke words like James did, and perhaps she would fit in again.  James went to see her mother's 'witches' hut and was not quite sure if the villagers had been correct, or not.  But the old woman looked at James with a hawk's eye - and then said she was too old for that journey and she would get on fine, as fine as she had these past fifteen years.  James agreed to take Camilla back with him to to Semmerly, if he could find it.

The journey took two years, but in year 54 James and Camilla stumbled into Rosered, still alive and with all of their limbs.  James immediately built a little house in the new area next to Kirk Trent's mother's house, and having travelled all that way with Camilla he was not at all ready to let her go now.  Joseph DeCroix did the official ceremony for them, and they were entered into the book of Rosered with a marriage date of year 54. 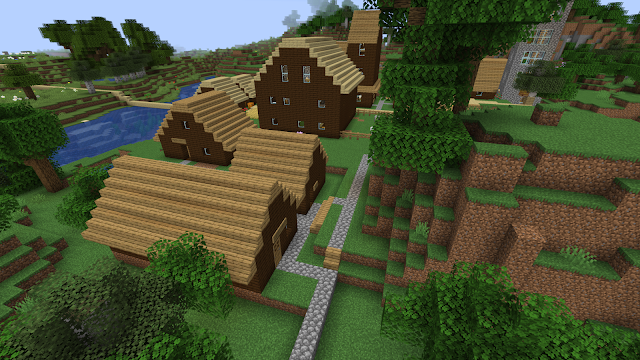 Four years later Frank DeCroix proposed to Samuel and James' little sister, Rachel, just after her sister Suki's graduation in Rivertown.  Suki had decided to stay in Rivertown and marry Caleb Parker.  For a town that had suffered terrible losses and a great outward migration, Rosered still expanded quite a bit in those dozen years.

The one person we could not account for in these years was Jamie North.  Where did he go after Marta moved to Warren Dells?  Wait, actually, what happened to Amos DeCroix, too, Frank's little brother?  Nobody even noticed for weeks that he had simply slipped off into the mountains.  It took a note from Ned Hendricks at Pennock Farm for Frank to even realize he had sorely disappointed and ignored his little brother entirely.

In the next update year 69.5 is continuing and Doomsday predictions from the Barracks Council has spurred a lot of the younger people from Cambrey (where the failed map of the South is) to move on to Whitmoor and Spate Station.  Whitmoor begins fortifying it's settlement against possible invasion from Kriganzy, but without sending an emissary over there to investigate - how will they know for certain, other than the word of Vaya village?  Jamie North returns from the far NorthEast, with tales to tell of the Island of Horses he has been living on for nearly eight years, and to chime in with Talyn Orak about sightings of the mysterious Drox.