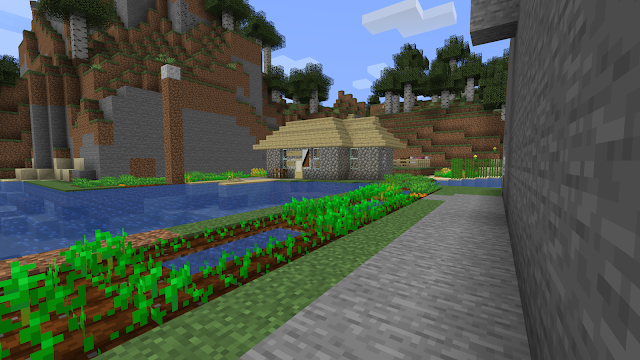 Volens Farm in year 58, two bedrooms- but it will need to expand!

Kyle Jackson married Valentina Oster (Zari Dee's wife Annette Oster's niece) from Eastham in Year 55.5, built her a little house in the valley Northwest of Rivertown, and they had a son Cole around Year 56-57.

Kyle began carving out the valley to make room for fields, and then turned quickly to industry after finding a hidden pit of lava in his mine - which makes sense, as they are just Southwest of Vanter, where such places abound.  He began making stone bricks, terracotta, glass and then slid sideways into making concrete powder in different colors, although it has not yet sold well yet.  Kori Paltry had the same problem years ago with concrete - just not enough people know how to build with it. 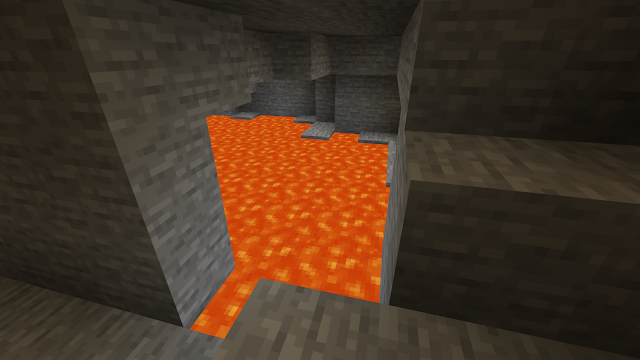 the lava pit to the North of Volens Farm, not very far underground - easily accessible from Kyle's mine, which has already produced more than a stack of iron (64).. almost unheard of for such a short time in occupation

Valentina found a brown sheep wandering in the area above the mine, and after capturing another plain white sheep and applying some poppy red dye, they have made a flock that is producing stacks and stacks of wool.  The brown sheep has a 50/50 chance of producing another brown sheep when mated with a white sheep or a red sheep - and a 100% chance when mated with another brown sheep.  Kyle took two brown banners to Natalie Allen in Rivertown to make the heralds for the farm, which are a black diagonal on a brown background with a white upper left section.

Kyle borrowed some carrots from his father's farm in Rivertown, and eventually, a few potatoes.  His little brother, Iyaga, is now taking care of the farm and has moved into one of the original worker houses.  Tan Vandreas' old house still sits empty - gathering spiders.. there are so few wanderers though now.  The Barracks Council continues to send out invitations - as Rivertown badly needs some 'new blood' to move in.  Of the last generation, only Iyaga Jackson, Caleb Parker and Kyle remained - and now Kyle has moved out to this valley, not far - but still not in town anymore. 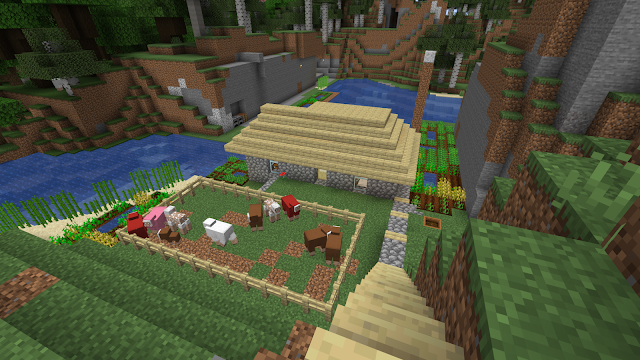 Kyle and Valentina's flock of sheep and fields 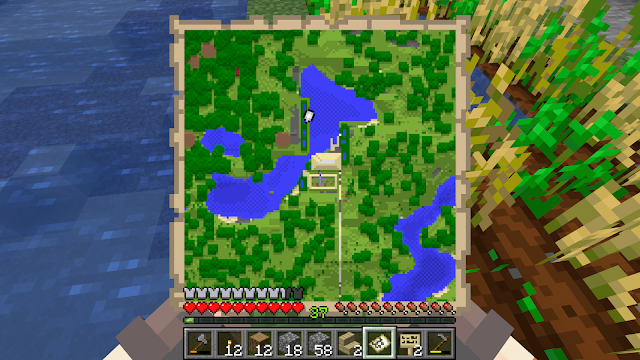 Volens Farm map.  Kyle saw the map in Rivertown at the Porter Thomas school, and pointed at this little cove - THERE, I'm going to build my house there.  It was his choice, even though it was unknown and too far from the city to call for help - thus 'Volens', the voluntary acceptance of a risk.  That risk has paid off, as he now has an active trade in eggs, many colors of wool, flint, sugarcane, paper, terracottas, carrots and more. 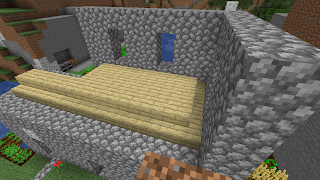 When Kyle and Valentina decided to expand their family - Kyle worked to put first one, then two more stories on the house.  He tried to keep the lower sections of the house sealed until the upper ones were ready, at least during the nights, to keep monsters out.  Two shots here of building extra stories on a house on top of the current story. 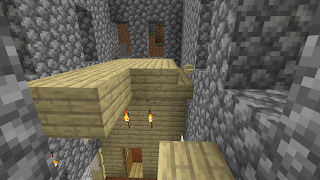 Cutting away the roof and making it a floor for the second story.

Kyle ended up with four extra bedrooms, two on each story, for son Vincent, and daughters Victoria, Ella and Lorelei, all born in the years between 61 and 66.  The farm is producing plenty of food, wool and other goods to support a well-furnished interior of the house full of paintings, banners, rugs, and more. 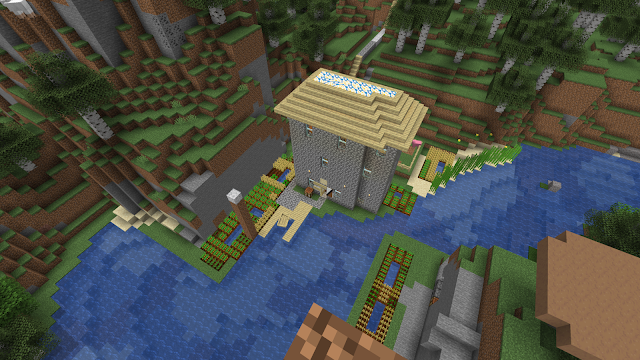 And the final result as seen from a spire. The roof is made with white glazed terracotta made in small batches by Valentina.  She has made pink, yellow, red, black and white terracotta from natural dyes around the area.  Kyle has also been making the same colors in concrete powder. 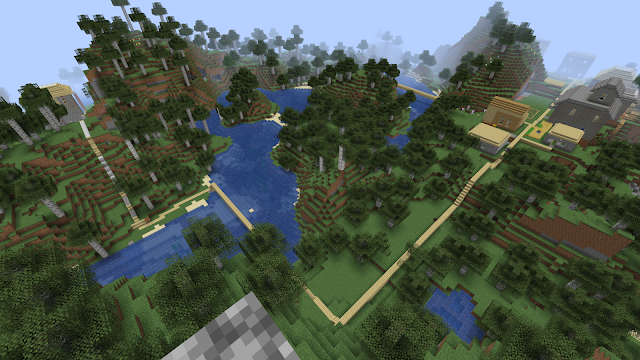 Kyle built a road and bridge over the Straty River to join Volens Cove to Rivertown.  The children can walk this road to go to the School in Rivertown or to visit their uncle and grandparents.  Many of the children from Benson's Pointe also walk across the East-West Rivertown bridge to get to the school for higher-level classes.  Picture above shows Volens Farm as seen from the hill by the Western Gate in Year 68.  West Rivertown and the Porter Thomas school are there on the right  with Volens Farm seen to the left.  Frannie Carlyle's railroad to Vanter is headed off in the middle to the North.

When Kyle was wandering the shoreline he discovered a buried treasure chest that had a fishing rod in it with Luck of the Sea on it.  He is going to take that to Marika Otrio in the school and see if she can learn the enchantment from it.  He isn't much of a fisherman, but if it can be cast on other things that will be an excellent advancement.  During a recent visit Oliver Daniels brought down three pieces of golden armor, found in an ancient ruins on a seashore, to Marika to see if she could learn their secrets, as well.