develoments in Whitmoor years 53 through 69 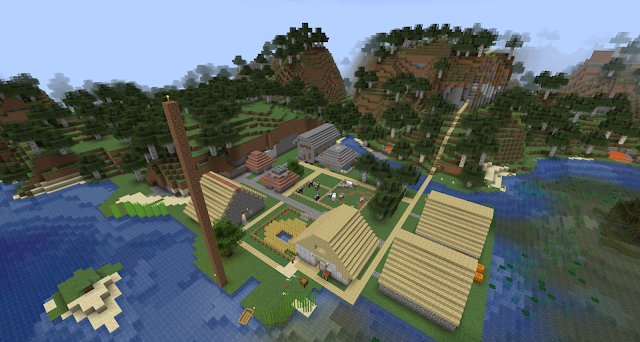 What happened in Whitmoor during those thirty years Percell Perkins travelled to the South?   In Year 53 Liam sent Donel and Gyro Eastham back to the mainland for supplies and to carry a message.  He was looking for a team of excavators to come and dig out the hill to the West of Whitmoor, to open up more room for expansion.  The biggest problem was that he kept running into underground water streams, that would then come down the hill and wash away the fields.  After filling in 'lake' after lake of little ponds in the hill, Liam finally just called for some help. 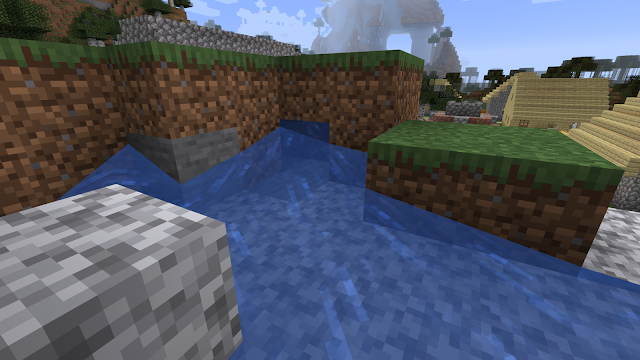 By year 56, two separate teams had arrived at Whitmoor, ready to take on the task.  Tyr Rockham answered the call out of Eastham and brought with a wide collection of shovels and knowledge of smokers.  Gyro and Donel quickly helped him make a kilnhouse, smokehouse, and a small house for his wife and young son.

Any wood logs around a furnace in a four square like a compass makes a smoker.  Place like you would a furnace.  Emits smoke-like particles out the top while in use, and becomes a job block for villager mobs.  Cooks meats, fish and kelp twice as fast as a furnace. 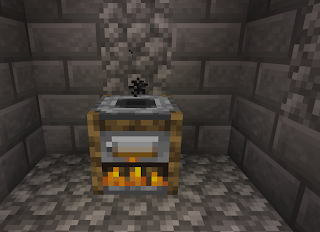 smoker in use inside the smokehouse in Whitmoor 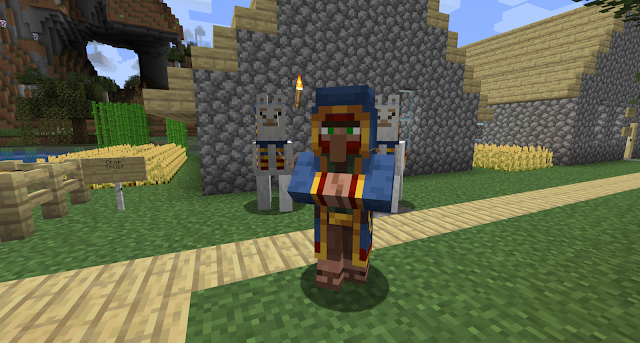 Arturo Aristo arrived soon after, from a village called Vaya, further to the West.  He had been told by the Wandering Trader there was room for growth here, and they were looking for excavators.  He also sent for his family, his wife, two children and younger brother  Liam and the Eastham brothers' farm was turning into a village, doubling in population in just the course of a few years.  But, what Liam wanted for the excavation project - a clear flat plain - proved to be a bit much.

Everyone was getting a little tired of chopping down the hill day after day.  The chests in the Whitmoor storage hall were filling up with dirt and stone, and the workers kept taking months-long breaks to plant fields, capture and breed their animals, and generally pursue their own interests.  After all, it took John Robinson thirty years working off and on to clear the space for McElvaney's house.. and Rivertown ended up expanding West because of it.  Whitmoor was becoming a community, and the community largely wanted to 'get on with things'... What was needed was a new idea. 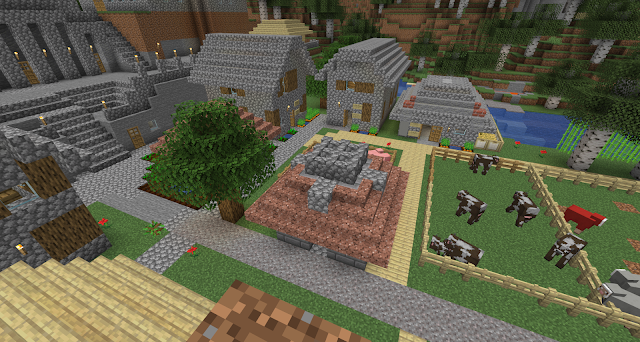 houses for the new families, and a meat smoking house and kilnhouse with two regular and two blast furnaces

Blast Furnaces will create a job for a villager mob, making them a weapon or armorsmith.  Blast furnaces use regular fuel but can only smelt ores - and they do it twice as fast as a furnace. 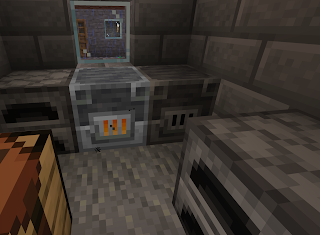 blast furnace in use in the kilnhouse in Whitmoor 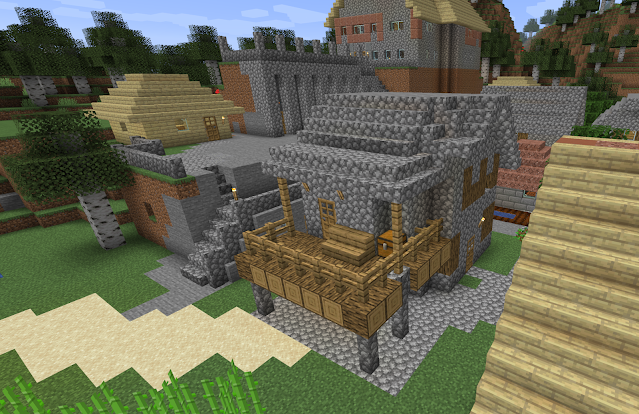 Arturo's brother Carmide built this four bedroom house.  He then went and continued the birch road South from Whitmoor until he reached a river valley.  He is still deciding whether to sell this house to another family and move out there or if he might find another reason to settle down in Whitmoor, itself.  Can he build the road all the way to Vaya from Whitmoor?  Does he even remember where Vaya is, now that he has lived here with his brother for years?

In Year 58, Hawk and Jaunniere Riggins arrived, and were able to convince Liam to take a different approach.  They also brought news that Whitmoor was closer than anyone thought to Kriganzy, a few days travel to the SouthWest - and that the Riggins and many others were expanding out to get away from internal conflicts there.  Neither Whitmoor nor Kriganzy are on the map at Cod Bay - they are too far South... does there need to be a Map of the South started, somewhere.. will that place be Whitmoor? 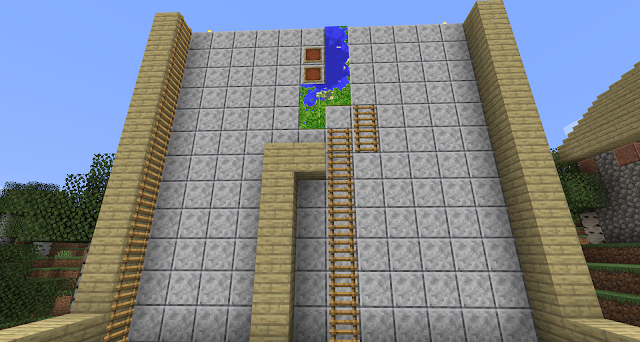 Roll for Dexterity Kevan Thomas!
If you fall off there, you'll break your neck.
This story follows certain D&D dice rules to decide what happens
during accidents, decisions, births and deaths.

If Whitmoor was to continue to grow, the town still needed a school and much more lodging and worker space.  All of the residents came for a meeting in the Storehouse and took turns giving their ideas.  Rockham wanted to open a shop for tools, and Aristo was experimenting with colored glass and clays.  Jaunniere was worried there weren't enough houses for the workers who came and went - and that they could not wait for the plain to be flattened to do something about it.   She came to Liam and convinced him to look at the growing town from a different angle.

"Every year you go to this Barracks Council in Rivertown?  We should have that here.  Like today, we are all here.  This is our Council.  It begins with the school, and turning this hill into houses.  We don't have to tear it down to do that, just change it a little..."  Liam remembered exactly the same thing had been done in Benson's Pointe, when the Garveys built their houses up on the hill.  He reminded the Eastham brothers about it, and they said that could probably be done before the year was out.  The stone in the storehouse chests could go to building more walls and a school they would all cooperate building.

Instead of chopping the hill down, they began to shape it, make railings and clear multiple levels and rooms inside the stone.  The railings ensured that no one would fall off the still quite tall platforms while distracted or as the sun was setting and they were hurrying to their homes.  For a while there it almost looked like Whitmoor was about to become a castle. 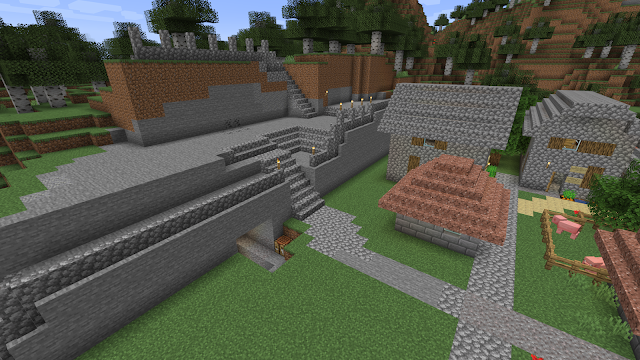 Everyone began to get tired of digging day after day. 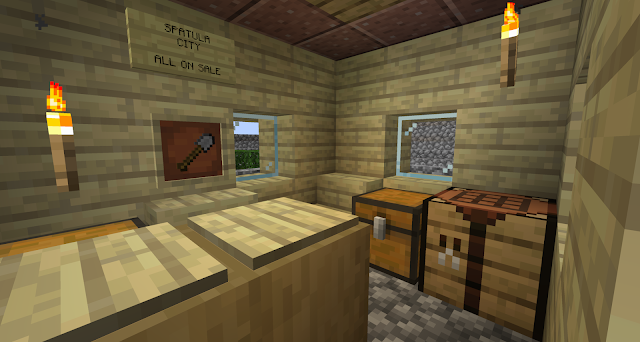 Some, just wanted to settle down and sell spatulas.. err, shovels.
Personal hobbies and industries are the lifeblood of towns, trade and creativity. 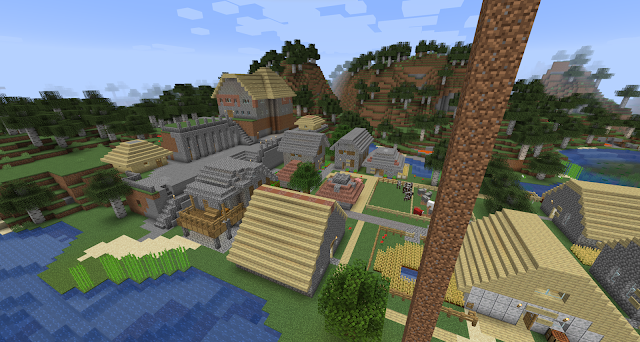 The projects planned in the Storehouse Meeting were quickly accomplished because of cooperation and shared vision.  Everyone lent their particular talents to the task.  Rockham got his shovel shop, and Arturo a place to display and sell terracotta and glasses made in the kilnhouse.  Liam knew that the town could flourish now because everyone felt like they had been heard and were not working begrudgingly on someone else's order.

And now with a two-story schoolhouse, barracks, businesses and new homes, Whitmoor is not just a farm, but on it's way to being a city.  The younger generation, more than a dozen children growing up, have a school and room for themselves to grow, expand and contribute in many different vocations.  When Liam travels to the yearly Barracks Council in Rivertown he has all of this waiting for him back at home, and his own similar Storehouse Meeting, held four times a year- or as needed.. to plan and coordinate, as well.

The one thing he did not plan on when he left for the Council was finding his brother-in-law alive and telling about all of the places South of Whitmoor that are now ready to be explored.  At this year's Storehouse Meeting - where will this younger generation want to go?  Liam's own son, Kevan, has already been South along the birch road, and may be bringing a blonde-haired mess of trouble into their midst.. perhaps those castle-like walls of Whitmoor are going to be necessary, after all.