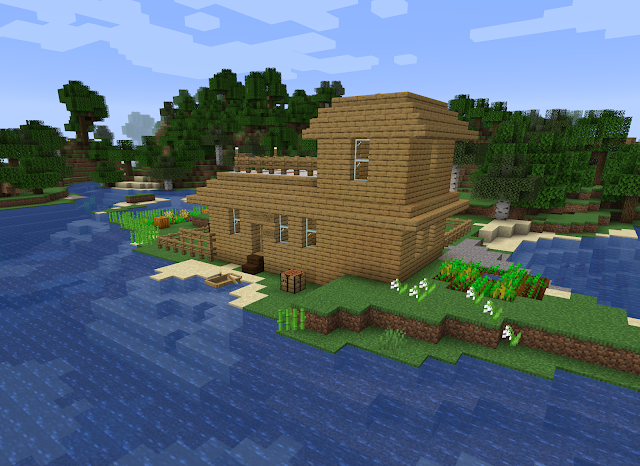 I hope you have finally forgiven me for disappearing out of Cod Bay - I sent word through Grandma Piper and Uncle Kallum, and you know they wouldn't have let me go if Grandma had a bad feeling about it.  Kallum and Christopher get along pretty well, although Chris doesn't hold a candle to Uncle when it comes to smelting iron.  Chris does pretty well with stone, though, and even located enough redstone and iron here to start making maps.  I hear redstone is hard to find, but he had a huge pile of it by the week after the house was finished, and he has been making compasses as soon as he finds enough iron to spare, to keep on hand 'just in case'.  Ships and maps, they are in his blood, as is wandering.  After we were married at Cod Bay, we stayed for a few days in Ravenna, and then headed North.

Christopher and I sailed NorthEast out of Midland.  We found the fabled 'NorthEast Plain' but it was not 'on our heading' so Chris wouldn't stop.  He continued directly NorthEast and landed in the most perfect of sandy little bays - like it was made for our ship to fit in.  He began building a little house right there on the beach.  By the time the house was half done I had discovered a road built to the East!  A road!  Out here?  It goes to the North and stops - but if you take a boat from there you end up at an old dilapidated place called Brandywine Farm.  It has lots of old kegs full of apple wine and looks like it hasn't been used in years.  It was from there I found out that the road North from Brandywine leads to Griessen Farm - the North City Remnants!  We had no idea we were so close.  But I have to report - and please do tell Steven Pembry of Cod Bay, at least - that there is no one living there.  There is a sign up that says they have all left 'in Year 42'.  It does not say where they have gone.  We have not been to the site of the City, although you can still smell the decay and strangeness... it was getting dark that day so we headed home and haven't returned there since. 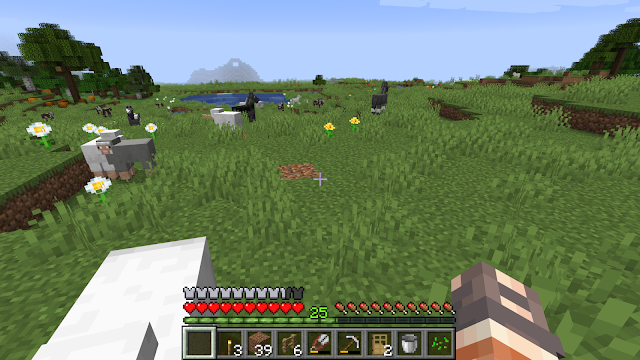 It was actually Steven's fault that we're here.  He had mentioned his sister still lived up at Griessen Farm and that it should be 'somewhere NorthEast' of Ravenna.  He is not fit for travel himself, and much too ingrained in the day to day runnings of the bank, and the Bamboo Trade and Map Expedition, which was meeting and forming parties when we were there in Cod Bay.   This is also the reason Chris wanted to 'keep a true NorthEast heading', so even a blind man in a fog could find their way to our doorstep.  And here we are.

I go over to the NorthEast Plain, almost every morning actually, it's so close.  I  gather eggs and seeds for our garden, we need so many seeds!  I found pumpkins growing wild there, and they are growing well in our gardens back at the house.

The NorthEast Plain teeming with life.  I am almost sorry that we didn't build our shelter there.  But now that Chris has built his house he doesn't want to move.  I have told him he basically built a 'ship on the prairie', complete with lookout and railings...  I think it is his Pirate blood.  That is one of the reasons I fell for him, actually, standing on the Beach at Cod Bay... something about how talked about the Sea and how he had never yet been but it was calling to him.  You have grandchildren!  Nerissa is a sweet little girl who loves the animals and runs along ahead of me on the Plains.  Don't worry I'm looking out for her.  I carry baby Lionel on my back, and mostly he just sleeps.  He loves his father's lap in the firelight, though.  We spend a lot of time in the 'belly of our ship' just enjoying the sounds of the Ocean. 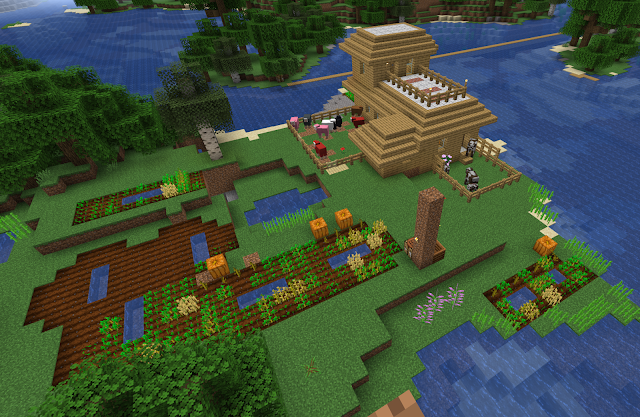 The only thing I really dislike about this place, which we are calling Sandy Bay, is how slow the wheat grows.  Pumpkins and sugarcane abound, and grow almost as quickly as I harvest, but the wheat is very slow to mature and gives very few seeds.  It might be the Northern climate?  It also gets dark here earlier than back home, and rains almost constantly.  But we work at it.  You might notice in these copies of our maps I've sent how many fields we are working.  We have to, just to feed ourselves and the children, and the animals.  I collect eggs in the fields so we can make use of the pumpkins and sugarcane as pumpkin pie - to think something that was a delicacy in Rivertown is one of our main forms of survival out here!

It only takes one pumpkin, but we have so many out here!

We have a few cows I found out in the plains, and several sheep that Chris coaxed in from the hills.  I hear brown sheep are getting more plentiful now in the world, and it must be true, because we have one here, too.  Chris went out looking for a second cow one day and came back with it.  I had to go find the cow - apparently Chris scares them off with his huge lumbering walk and wild stare. 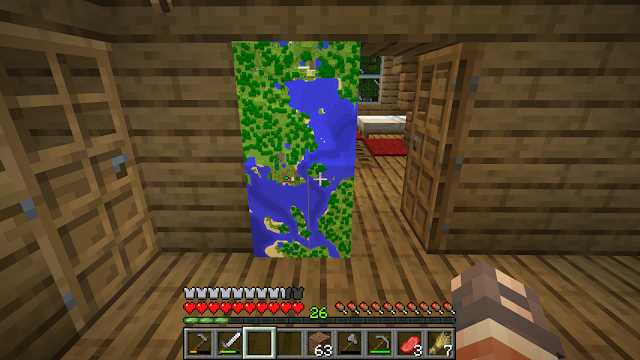 Please give the copies of the map to the Porter Thomas School.  You can see Brandywine Farm and the road quite clearly as Chris has drawn them in.  I think their Cartography department would appreciate them - if they match up to the coordinates they have, maybe they'll even fit into the Great Map at the Bank.  And please tell Steven about Griessen Farm, I don't know what to think, myself.  If they've been gone twenty years, his sister and their whole town, what happened after the Earthquake?  All of those houses standing empty... they even took their beds.  The signs say plagues and storms... lava coming down from the mountains - and now with us living so close I wonder if it is still going to happen again?