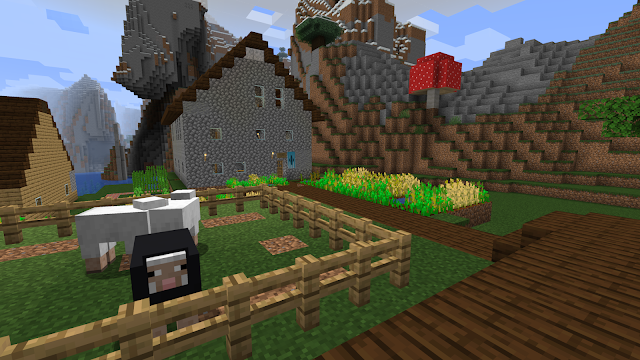 The house Bram Trent built in Cod Bay, finishing in Year 49, when he married Kira DeAryl and settled down.  There are seven bedrooms and a two room suite on the third level, as well. The wooden house to the left of theirs belongs to Tasha (nee Benson) and Iago Orak.  The stone house with the four square pattern on the top of it is Mandra's weaving shop.

They have put in fields of wheat, sugarcane, potatoes, carrot, pumpkin and watermelon.  In the back of the house are two cows (one found in the beach to the left, one traded with Dennis Danby for iron), and two sheep (one found in the woods near, and one found on the plain by Cambrey) - so they are set to begin their own little herds.

Kira was thinking light blue wool would be a nice addition for the town, like the flowers Mandra had dyed their banner with.  The banner is a black diamond over light blue gradient, with light blue stripes over that. 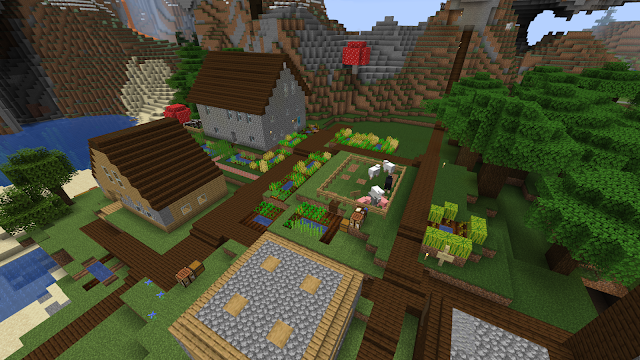 More at a later time.. there are more stories to be told from the Bamboo Trade and also from the settling of the NorthEast plains, we need to check back in with the island seafarers of Amularia and surrounding islands.  Tan Vandreas and his wife Terezea, have four children including twins.  That was an epic battle of wills.. but Tan had some help in deciding from 'outside forces'.  That will be a story that needs telling!

And the big story of the Great Earthquake will take a few more turns as Marika Otrio goes to investigate the ruined site of North City.  The enchantress is going to make a big discovery, something that can still change the fate of the entire World...