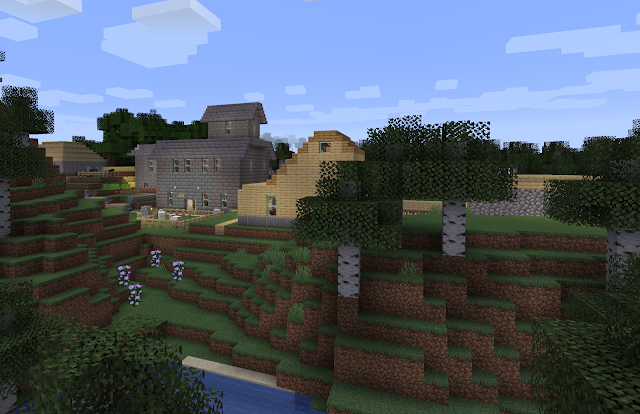 Porter Thomas School and Iyaga Farms, as seen from the North

I have just graduated a student one James Pippington, of Ravenna, in the field of Cartography.  And now is the terrible moment I must decide whether to give him the assignment that is rightfully his, or to wait and see if he goes on the Journey himself.  I feel I must intervene some, because it is imperative he does not go alone.  The work I have done over the past year has been confirmed by strange news from Sandy Bay, NorthEast of Midland.. the rediscovery of Brandywine Farm, and the Road to North City.  I must go with him, but there are others, as well, that must be gathered.  I am trying to find them with all my available tools, but some of the results are still cloudy.  It is of the utmost importance - the fate of entire World could hang in the balance.

As for James - he is one of a set of keys, to what puzzle I still have not figured out.  I knew it even then, years ago, when I first met him.

I was travelling that day from Cod Bay to Rivertown, to enroll in this school for my very first quarter.  Porter Jackson had sent me a letter, asking for me to come and begin to train to run the school - this was all strange and unexpected to me, but I was willing to investigate.  Up until that point I had only studied at the DeAryl school in Cod Bay, and was working on crop and ocean sciences with my cousin Dalton, analyzing wheat, kelp and other natural substances in the area to see what chemicals they shared in what quantities.

Priscilla Pippington and Pomra DeAryl were some of the best teachers in the sciences of dyes and extracts.  Priscilla had studied Chemistry at the University in North City.  Steven Pembry would pop in to discuss redstone, smelting and mechanisms.  He had also studied at the University, and had been ready to open his own shop in Clockmaking when the Earthquake hit, sending him scrambling South

When I arrived at Rivertown the entire school was a mess.  Porter was gone all of the time at his own explorations in the West, and the fine building was barely used for more than reading and cookery lessons.  I took up organizing what I could, learned as much as possible about what Porter Jackson and the Barracks Council had been trying to accomplish, and then began recruiting teachers and students.  By Year 54, Porter had entirely abandoned the School and was working full-time in the Islands to the West.

When I met James he was about eight years old, standing outside his house with his father, Perry.  Perry and his brother Benjamin were some of the first children born in Rivertown after it was settled, my father Niko having been the first.  Father would talk about those 'Pippington boys' and how they and Thaddeus, our next-door neighbor in Cod Bay, would roughhouse and 'half tear the town down one day and then rebuild it the next.'  Rivertown is not half as lively as that now, there are so few children,  The Pippingtons in Ravenna, though, they have been prolific.  Perry and Benjamin both married later in life, to cousins from the Eastham village.  When I saw Perry again after many years he looked tired, but happy, leaning there in his garden. Ravenna is full of small family fields, just like Cod Bay, and everyone spends their time bringing in pumpkins, wheat and carrots to stack away for the Winter. 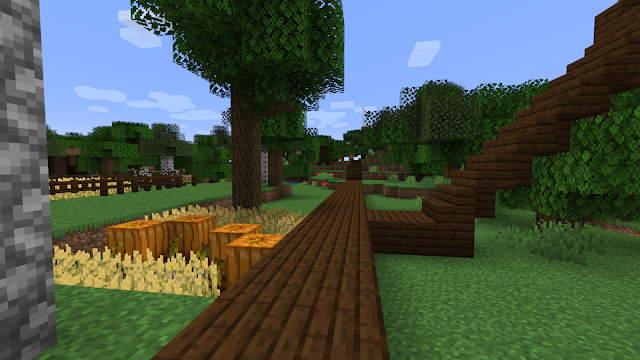 That day, as I was walking past with my satchel to head to the school, Perry and one of his sons were working in their garden.  The older boy was repairing a fence and Perry had turned to help him with some small aspect of the notching.  I stopped for a moment, because it is the kind of thing I am interested in.  I stepped right up under a tree in a big empty space, and was getting out my notebook to make a sketch.  The younger boy reached out to me and grabbed my arm.  I looked from him to his father as he pulled me further down the path, away from the garden.

'Don't stand and look there, lady.  That is where the Ender Man came.  Right there, behind that tree.  He took one of our pumpkins!  And then there were purple snowflakes in the air.  I caught one, and it stayed right here, like hot ice.'  James showed me his hand, where a strange purple stain remained on the skin, streaking down along his vein lines.  Perry stepped in and nodded, in his quiet way, 'He did, and it doesn't wash off.  Melodie at the clinic says there's nothing wrong, physically... '  Perry looked worried as he said this, uncertain whether to believe the good doctor (who had saved RoseRed from the Fever the same year young James was born), or not.  "It should wash off, shouldn't it?  What kind of thing doesn't wash off, eventually?"

James looked up at me with his wide brown eyes, 'But sometimes, lady, it hurts - that way.'  James pointed off to the North.  'Especially on the dock.  Father says I need to go there, for the boats and such, but I don't want to.'  Perry smiled nervously, and held out his hands in a gesture of helplessness.  'Most of the time he takes Aaron, instead.'  Perry laughed this time, and said 'Or I could take Polly!  She can carry as much as you can!' he stepped back as James turned towards him indignant.  'She can not!  She's a whole year younger, a whole YEAR.  I'm stronger.'  Perry brushed the subject off and started to pick up his hoe again.  'Then you'd better get back to gardening, young man, and leave this good lady alone.'

I took a few steps away down the path, then turned.  'It hurts? James?, how?'  The boy looked at his father for reassurance, then came back to my side.  'It pulls.. it wants to go and I don't want to.  But it's just a little piece, and the further I stay away the less it wants to go.'  I nodded and gave the best smile I could to him.  'Then you just stay right here, at least until you grow up and it is even a smaller piece compared to the rest of you.'  James looked down at his hand in wonder.  He hadn't thought about that, yet.  'Thanks!  I hope so!'  He ran off to his father just as two little red-haired girls came running around the side of the building and nearly took Perry Pippington off his feet.  'Oof!  Polly!  Sally!  Watch out!'   The laughter continued to ring down the path as I made my way to the school in Rivertown.  But deep down, it was not a laughing matter at all.'

Six years ago James came and applied to the cartography school.  I know he has it in his head he will map the South for the Bamboo Trade.  He talks constantly about it.  But no, now is not the time to go South.  The North needs to be explored before it's too late.  If I could only convince him.  But it's not up to me to convince him.  It will be someone else - that person I can't see yet.  But the time is coming soon, of that, I am certain. 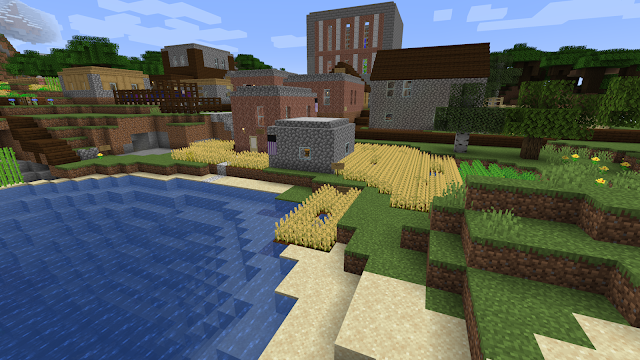 Marika and Dalton's hometown of Cod Bay, circa year 66

For the time being, I am sending my cousin Dalton and also Suki Parker to Midland for a few days, to update the maps there, and work on connecting the Sandy Bay maps to the rest of the Great Map in the Bank at Cod Bay.  I think they will be useful in the next planning stage.  Several of us have been studying the map project and trying to make sense of certain events reported.

Dalton has already been investigating the wheat anomalies here in the East, in North Ravenna and in Piper's Cove.  Marybelle Orak had reported similar difficulties at Sandy Bay.  Once Dalton began to show me what he had learned about the wheat, I found similar connections and patterns in the fishing, tree growth and even population patterns of the areas involved. 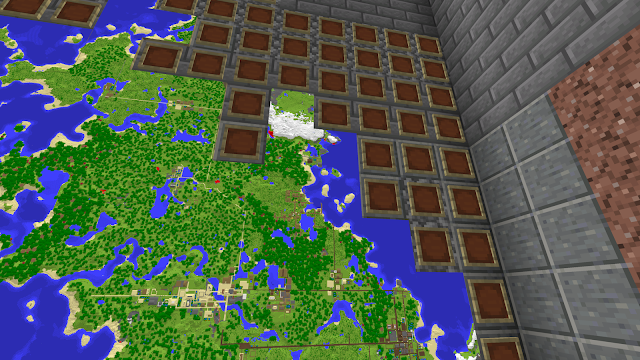 I have been tracing out those 'lines of growth interference' that have been showing up using my Enchanting Table at the school.  All of these lines are pointing to one place of convergence - and it is in the North, North by NorthEast of Ravenna.  I am terribly concerned for the line that runs from WestSea and Amularia, where two children have been affected, first Ilena Thomas, and now Hogan Daniels, as well.  I am still investigating if the trouble in Rosered all of those years ago may have been caused by this same phenomenon.   If the Sandy Bay maps prove to show the same pattern, it will be beyond a doubt.

There is something sinister at work here, and it stretches it's fingers out even underground, through rivers and works at an underlevel over entire communities.  And it pulses, increasing one year and then diminishing, then returning again.  Only by studying it further will we know if anything can be done about it. 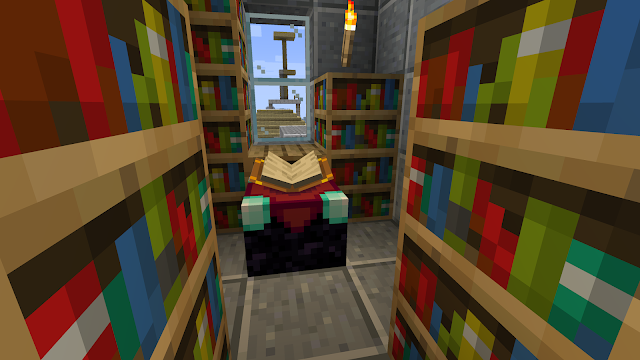 and a diamond from Porter Jackson's buried treasure in Amularia

If I am sending Suki perhaps her husband Caleb would like to work with Dalton on the wheat problem.  And if Caleb goes along, perhaps he can take several of his agriculture students, as well.  James' brother Aaron is returning soon from his apprenticeship at Piper's Cove.  He has applied to teach at the School, and set up shop in Rivertown.  Perhaps he will be the one to convince James to go on the expedition.  If I could just see the last piece of the puzzle - it is like it keeps moving as soon as I put my finger on it...