Darren Kincaid has been through a lot in his life.  He lost both of his parents, Tom and Violet, in the Great Earthquake in North City.  Then, he travelled to Rosered Iron Mining community with his sisters, including elder sister Ember, who was married to Scott North.  Stanley North had gathered up several survivors, his son and daughters, George Claymore (married to daughter Emily), Isla Straty and the Kincaids and made the trip down the river across the continent to find a new home.  George was a kilnmaster, and Stanley a weaver - so Darren has learned a little bit about both trades.  Then, the Fever in Rosered took several lives, and Darren himself was so gravely ill that if Melodie Whitacre hadn't found a treatment, he would have died.

Now, at age 34, he has still not been able to settle himself in Rosered.  He still worries about the mines, the source of the Fever, and would like to make his home and family somewhere else.  He had made up a plan to head to the NorthEast Plains, somewhere far beyond Eastham (East Native Village) and stake out a homestead.  After a short while though, he found he was not really one for boat travel long distances.  He began to head North through Eastham, intending to go over the mountains instead. 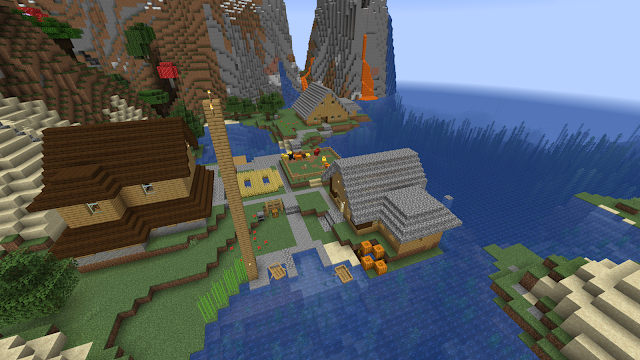 After a long day of hiking Darren ran across something he had only heard about in books.  A brown sheep.  He had a lead in his pack and before he could give himself some solid thinking about the benefits of the idea, he had it lassoed and was standing there, in mountainous territory, with a rare sheep.  He looked up at the mountain.  It was going to be hard just getting himself up there, much less with a sheep in tow.  He looked over across to Eastham.. he really didn't want to go back the way he came.  Then, his eyes were caught by the lava flow coming down off the mountain.  Between the lava flow and Eastham there was, in actuality, a 'NorthEast Plain'.. although it was sort of a small one.  He made his way down, staked the sheep out on a fence and began to build what was to be a small house for himself.

As he chopped down oak trees (and replanted them) and built the walls of his house, it became a little bigger, and a little bigger - until he had actually built a three bedroom cabin.  "Well, this is bigger than anything I'll ever need", he thought.. as he went outside and began to build a suitably large pen for the sheep, as well.  He knew there were several other sheep up in that forest he had come down from, and he would go back and get a few later, when he had a good size pen ready.  As he looked out across the bay at the lights of Eastham, he knew he hadn't made it anywhere as far as he wanted.  He thought, well - maybe there will be trade opportunities?  Maybe he would find a girl?  He continued to strip planks and break sticks, binding them into fences.  While he was working on the sheep pen he heard some commotion from the lava side of the shore. 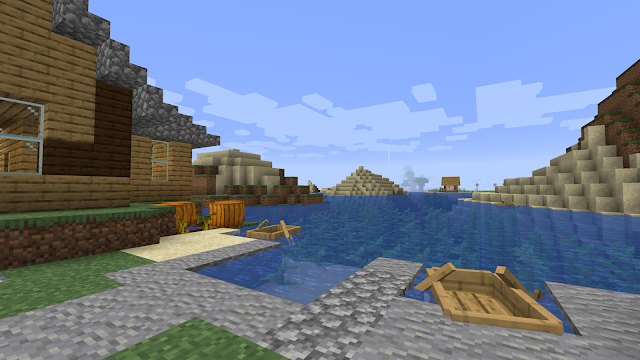 Eastham as seen from the Midland dock

He recognized Wanda DeCroix, from Rosered, and with her was another woman, and two men.  Their ship had been smashed from underneath by Drowneds, and they were camping on the shore working on a new one.  Darren came over and shared bread with them, and invited them to use materials and even work in the mine that he had discovered while mining stone for his roof.  One of the other men was Bruce DeCroix, Wanda's cousin from Cod Bay.  With them on their journey was Cyrus Phillips and his sister Kyra, from Rivertown.  The pairs had just gotten married and had set off with the same intention as Darren - to find the 'NorthEast', but not all the way to North City.  That night the Drowneds patrolled the entire shore, and the five huddled in Darren's house and waited for sunrise.  By morning, they had all decided there was better safety in numbers.  Bruce and Cyrus decided to stay and build a community there with Darren, and help him plant fields and work in the mine.  Wanda also knew that a safe mine is nothing to take for granted, having also lived through the Fever of 44.

Darren was a bit upset that the brothers-in-laws desiccated his orchard, which he had been planting all year, in order to make their houses.  He almost came to strong words when they didn't even pick up the saplings to plant back.  "This is basically an island - there is a forest up THERE and ocean everywhere else around us.  It will be very important to keep a supply of wood near to us down here - for fences, tools, weapons...'  Bruce agreed and apologized, planting back as many saplings as he could gather.  Cyrus was a bit harder to convince, as he wanted to build his house FAST, to protect Wanda from the Drowneds.. but eventually he came around. 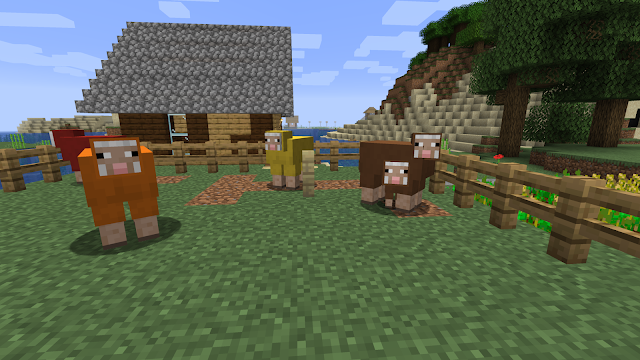 The crops grew and Darren began to breed the sheep with extras he pulled down out of the mountain forest.  Using local flowers, the women helped him with the wool knowledge he had learned from Stanley North, dyeing the wool and eventually the sheep themselves, into a variety of colors.  Darren took this colored wool and traded at Ravenna city with Perry Pippington for pumpkins, and established a spire dock that could be seen from the Ravenna side.  While in Ravenna one day trading, he traded some yellow and red carpets to Camra Gosreele, of Benson's Pointe.  She invited him to try to sell some more to Petra Garvey and Janie Benson, and he spent an afternoon being regaled by tales of North City in it's 'prime' by Simon Gosreele and Henry Garvey at the Benson's Pointe city Hall.  He also became enamored of Rachel Gosreele, Camra and Simon's daughter, and in Year 55 she came back to the as of then unnamed community.

The land is known to the people in Eastham, but they had never felt a need to settle there.  It has plenty of fish, some deep natural mines in the hillside, sheep, pigs and flowers.  It is sometimes called 'Where the Fire Meets the Sea', because of the Lava flow coming down from South of Henrick's Pointe.  Darren knew this was also true of the mines he had been working in, where several flows of lava met with water in the span of a dozen or so blocks.  Upon discussing it with Bruce, Kyra, Cyrus and Wanda, they finally decided upon 'Midland'.. because it was the land halfway between where they started, and where they intended to be.  It is possible in the coming years that Midland may expand more, out further into the ocean, or up the mountainside hill.  They have already crammed three houses into the little space - but with some careful planning, they could terrace the slope and little inner bay into a city center. 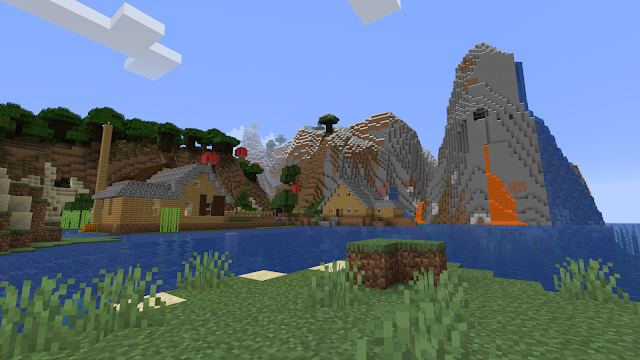 The Midlands, from a small island to the southeast

Darren had a further surprise coming for him.  He built a three bedroom house and in Years 56 and 60 Rachel and he had two daughters, Pearl and Penelope.  Then, in Year 61 she said she was expecting again and it was 'different than either of the girls.. I think this one is going to be a boy.'  Darren was beside himself.  He looked at the two tiny bedrooms his daughters had, and then tore half of the house off making an expansion, while keeping as much of the rest of the house enclosed.  He went so far as to make an extra large room for the girls and an extra floor inside the house altogether, 'just in case.. so we don't get caught out again..'  Now there was plenty of room to welcome son Sean into the fold.  Rachel had been right, and she indeed delivered a son at the end of year 61, barely 14 months younger than daughter Penelope. 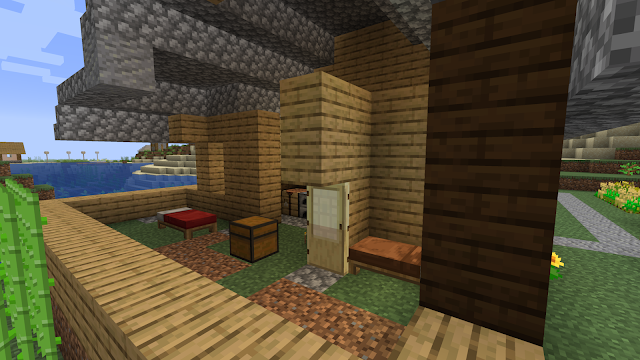 Although at the time he couldn't be certain, Darren's house expansion foresight paid off.  In Years 66 and 67 Emmett and Edgar were born, one right after the other.  Irish twins, again... and that second story came in handy!  Bruce and Cyrus both took pages out of Darren's book and completed (Cyrus) an inner-second story and (Bruce) and entire second-story addition onto their homes, as they added four and five children to their families each.  Bruce and Kyra's daughter Ulma was just as much of a surprise.  Kyra would have said she was 'done' - but apparently the Midlands had a different idea for them.  Ulma is a very interesting child, pale and spritely.  She spends all of her time on the shoreline between Eastham and Midland.  She says she speaks to the Drowneds.  As long as she doesn't bring any of them up into the cities  - it will be just a childish fantasy.  But Kyra does wonder... especially with some of the strange shells and bits of brick Ulma shows up with.  The Natives recognize the blue-green bricks and say they are a good luck omen to have them.  I guess Time will tell.